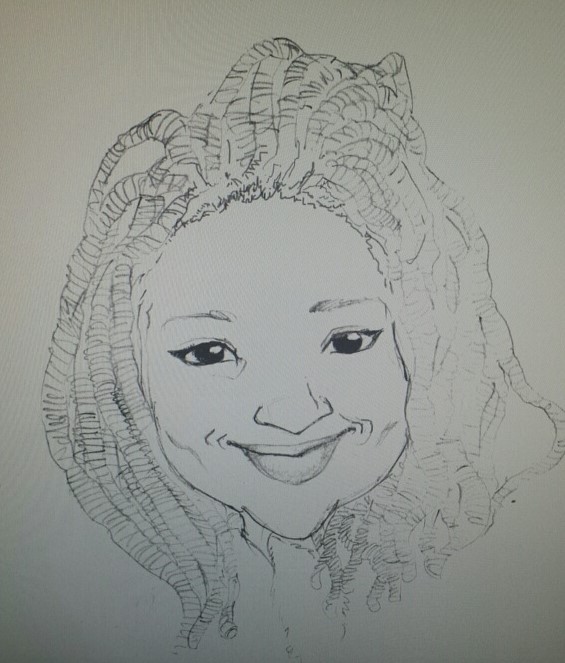 Often times, you see headlines on the covers of magazines like “18 Favorite Beaches”, or “Top Ten Scenic Drives”, et cetera. And people (myself included) often say, “That’s one of my favorite songs“, or cars, or whatever they are talking about at the time.

But by definition, favorite means, “Preferred before all others of the same kind”.

Well then, how can there be 18 favorite beaches or one of my favorite songs?

Of course, there are ways to get around it. You might say, “That is my current favorite”.

I remember there was a local DJ, named Ichabod Crane, on FM 94.1 (KMPS), a few years ago when the station was a country station, who always used to say, “This is the greatest song in the world today”. Then he’d play the song. Then the next day, he would say the same thing about another song. That was his way around it.

My current Lizz song favorite is “All The Way Here”, a song she wrote, herself. Tomorrow, my current favorite will be “Grace”.

I’m not a grammar freak or a perfectionist, by any means. I just notice little details like that once in a while.

When I see those kind of headlines, or see the word favorite, it reminds me of  (OOPS!) my favorite story (there, that’s better!) about my father.

It’s been many years, now, since my parents passed away. When my father died, I was attending his funeral and the preacher of my Dad’s church was there too, standing at the podium, saying a few good words about my dad.

My Favorite Dad (the only one I ever had 🙂)

The preacher said he liked my dad for his sense of humor.

He said that, one day, Dad approached him and asked him, “Preacher, how many people do you think we have in the church? So the preacher said, “I think there are about 50 people.”

Then he said that my dad declared, “Well, the congregation got together and they took a vote. They determined that YOU are the second best-lookin’ guy in the church!”

Knowing my dad well, the preacher thought about it for a few seconds, and thought to himself, “Okay, I’ll bite, but I’m going to regret this.”

The preacher then replied to Dad, “So, who is the favorite? Who is the best-looking guy in the church?”

So my dad was telling him that everyone was preferred over him!

The preacher then laughed and said, “It’s my own fault! I walked right in to that one!”

So that’s my favorite Dad story! Or at least one of them..(oops!).

After I got back from my 11-day European trip this past April, to see and hear Lizz Wright sing in Paris, Budapest, Vienna, and Zurich (see “Best Trip Ever”), I wrote a post called “Lizzles”, in which I mentioned that I made a new playlist of Lizz’s songs, and I named it “Lizzles”. 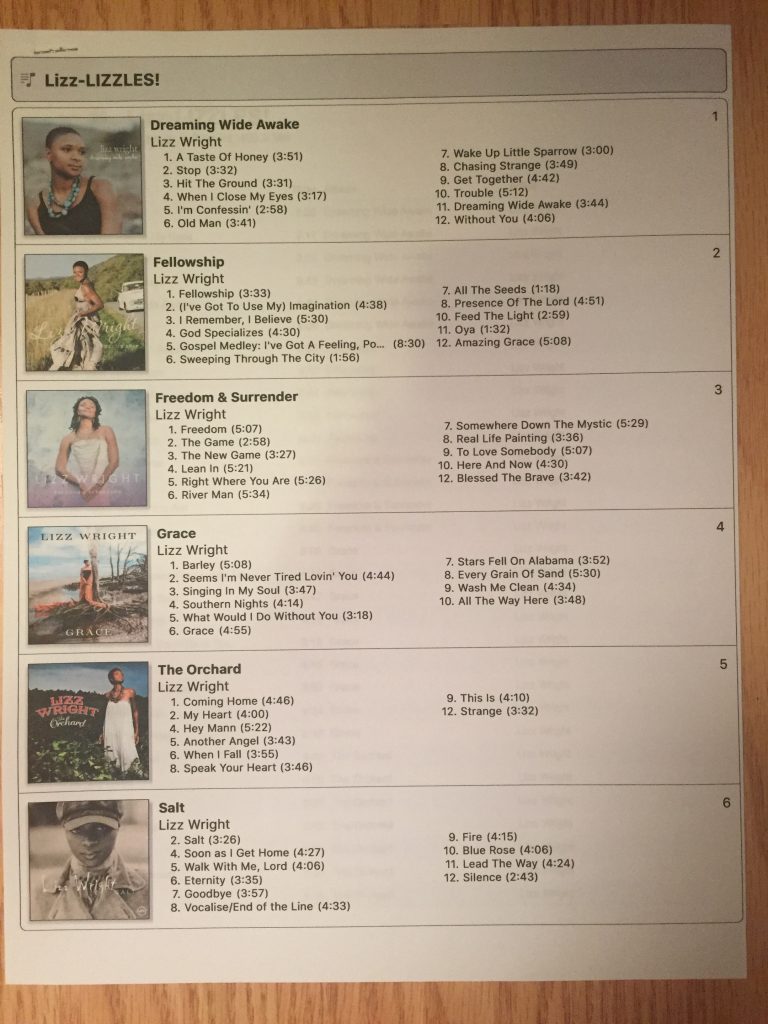 “Lizzles” is short for Lizz Sizzles. I made the name up because I think she sizzles on each and every song she sings. I have 71 songs by Lizz in my iTunes library, which I listen to 25/8 (that’s like 24/7) because she is my favorite singer. No others preferred!

But even though I like all the songs she does, I wanted to put different groupings of Lizz songs into separate playlists so I could listen to any grouping I felt like listening to.

There are a certain number of songs (61) that really touch my spirit every time I hear them, and there are a few (10) that, for one reason or another, didn’t “make the cut”. But I’m not knocking those ten. I really like them too. So let’s look at it this way. It’s like the story about my dad (above).

I have no favorite songs by Lizz. (By definition: None preferred above all others of the same kind).

Ten of the 71 songs tied for second place. I didn’t put them on the Lizzles playlist. (But when I want to hear them, too, I just hit shuffle and listen to all the songs in my Lizz library.)

The “Lizzles” playlist consists of  the following three separate playlists: 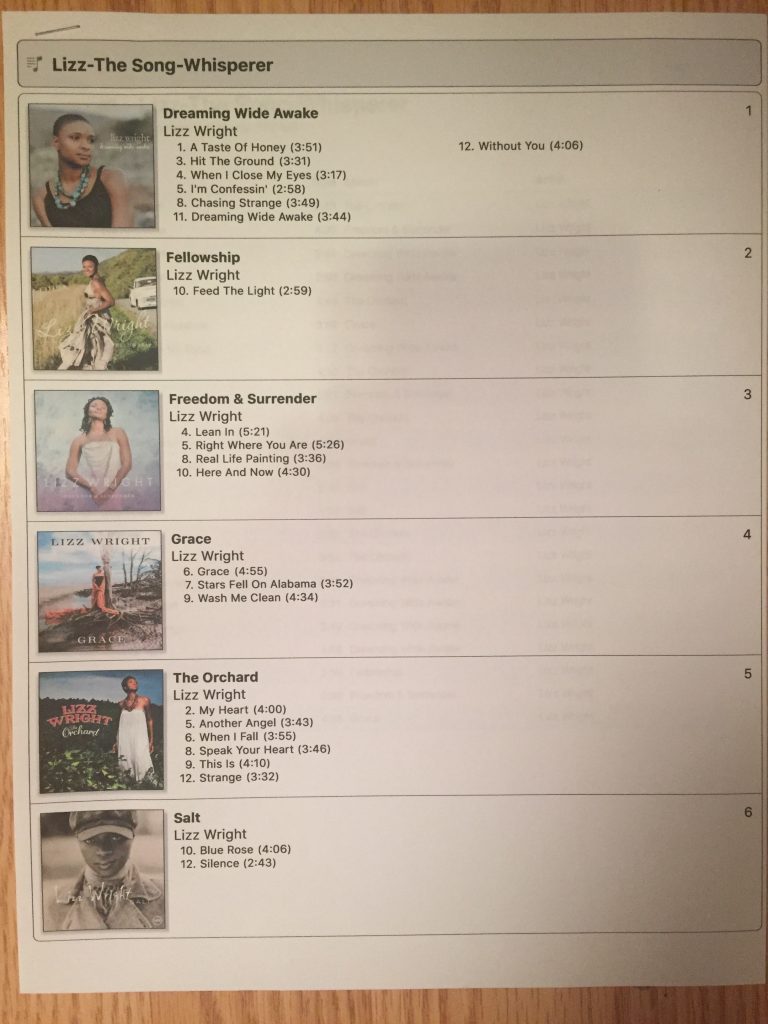 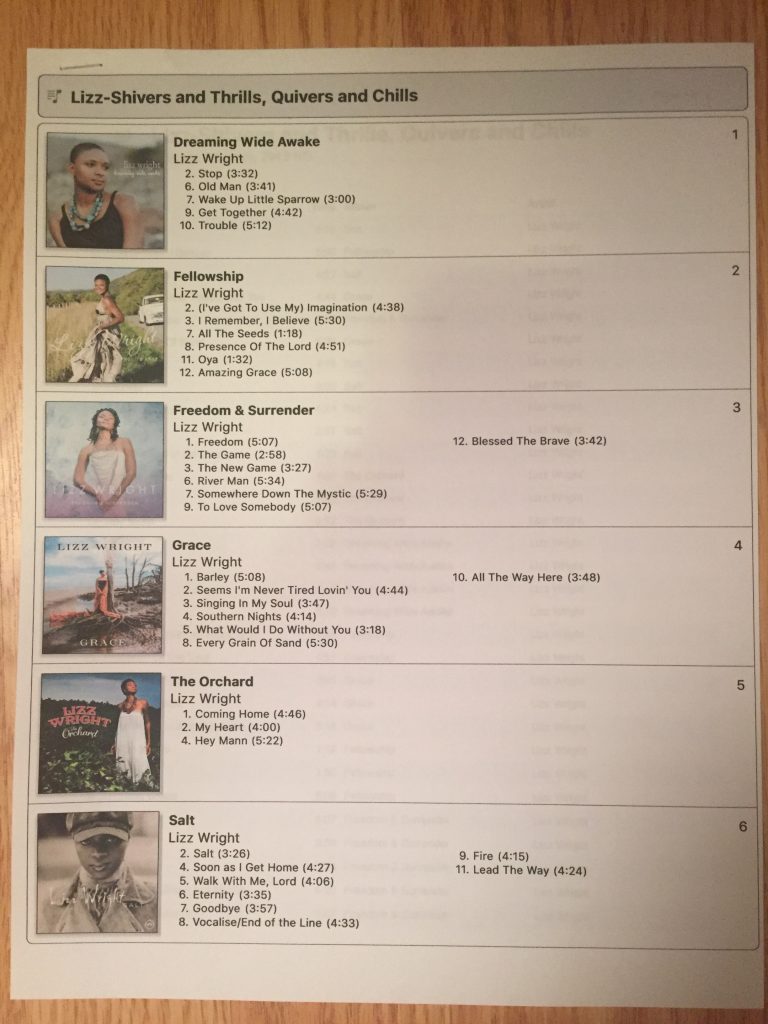 Then, if that wasn’t enough 😁, I made one more playlist called, “Quivers and Eros“. 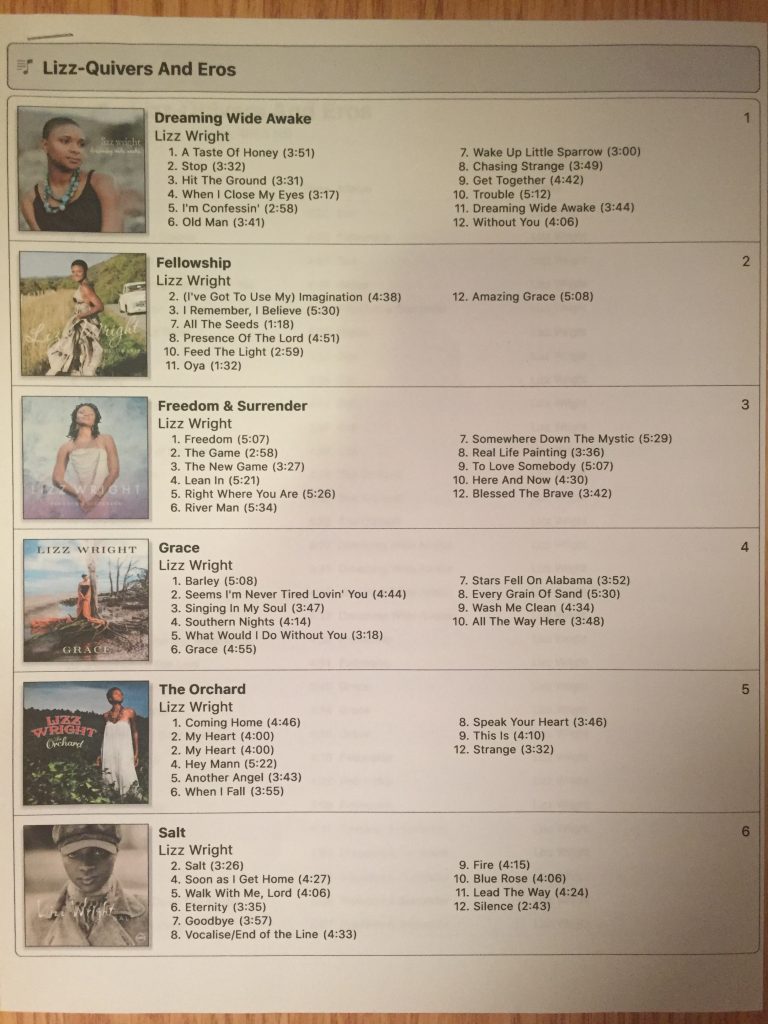 It consists of “The Song-Whisperer” playlist and the “Shivers and Thrills, Quivers and Chills” playlist.

“Quivers and Eros” is my favorite playlist. I find myself listening to all of these songs most often.

The three categories of playlists can accomodate any future songs she releases.

“The Song-Whisperer” includes songs she sings in a soft, sensual, sultry, soothing, simple yet sophisticated whisper. They touch my heart and they move me.

Oh, well…I don’t EVEN know what that means. (I’ll have to Google it someday!)😁

But, seriously, each of these “Song-Whisperer” songs tenderly touch the sensitivity gene I was born with. That’s where the affinity lies.

“Shivers and Thrills, Quivers and Chills” includes all of her other songs, not whispered, that inspire me, calm me, and generally brighten up my day. It’s an eclectic list of songs that she highlights and brings to life through her voice, style of singing, and arrangement of each song.

“Gospelizzious”, of course, includes only the Gospel songs, for those times when I just want to hear those.

Oh! I almost forgot! I did create another playlist for just the songs that Lizz has written herself or has co-authored with others. I call it “Songs From Her Heart”: 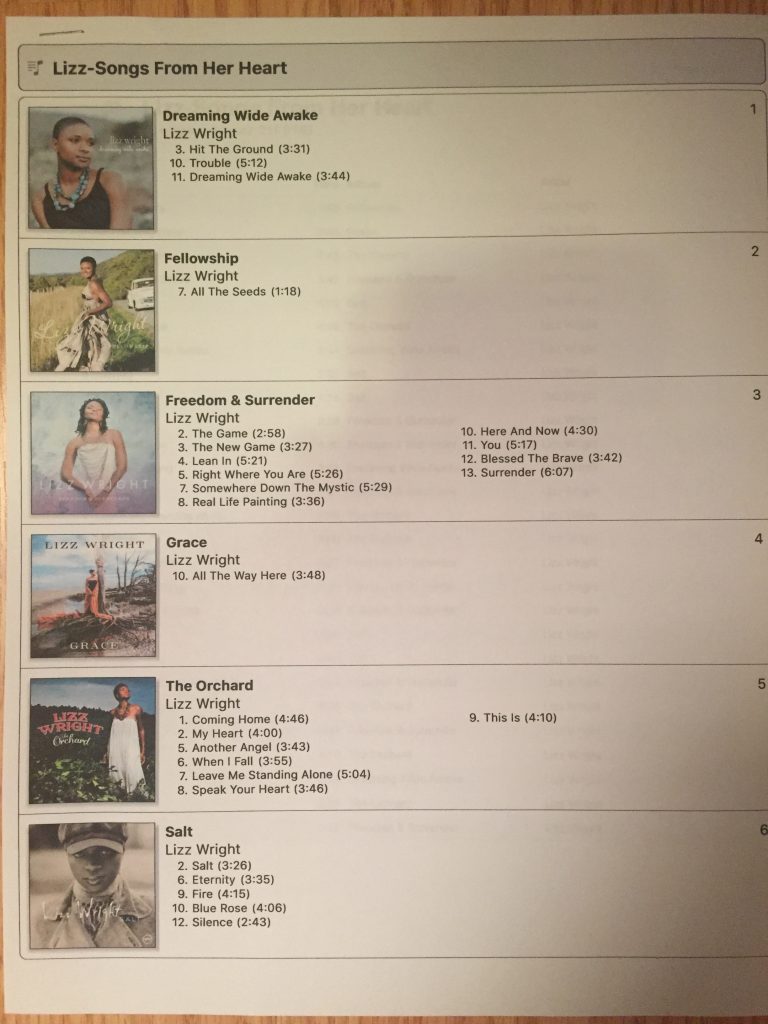 There are great singers everywhere, vying for my (or any potential fan’s) attention. They get my attention, sometimes, temporarily. But no one tugs at my heart strings or resonates with my musical taste and sensibility like Lizz Wright.

All these things are why I prefer her over others.

That reminds me of my favorite Van Hunt song. It’s called “Seconds of Pleasure”.

The first thing I like about it, is the simple but cool and compelling guitar lick that starts it off and enjoins the bass to pull you right into the rhythm of the song. At first, it’s so sexy, you think it is an “I want to sex you up, baby” kind of song.

But as you listen to more of it, you discover it is about being aware and conscious of each and every moment (each second) you experience as you go through life.

Then come the harmonies, and the hook:   “Seconds of pleasure, life’s little treasures”.

Nevertheless, it is a sexy-sounding song.

So, whenever I hear a sexy song like this, it doesn’t disrupt my train of thought. But I generally start thinking about cabooses 😂 😂.

The guitar lick at the start of Van Hunt’s song reminds me of my favorite John Legend song, “Slow Dance”.

Again, the guitar (this lick kicks it up a notch), the bass, the harmonies and the meaning of the song, all make this a classic. It has a timeless quality about it. But it also takes me back in time to the music of earlier black groups and creates a nostalgic feeling inside me that I can’t quite pinpoint.

I think that’s genius too.

The nostalgia I felt while listening to John Legend’s song made me think about my favorite song by Mac Davis, called “Hooked On Music”.

I first heard him sing it in the 70’s, on one of his cassette tapes (you can google that if you don’t know what it is), which I bought back in the Paleolithic era.

He wrote it to say how much music meant to him. But he also wrote it to sound like an Elvis song from the 50’s, and he sang it, himself, mimicking Elvis.

In the song, he also references Jerry Lee Lewis (and added a little bit of Jerry’s style of piano playing into the song) and Buddy Holly, two other influential rock and rollers at the time.

I think it’s so clever and pure genius. I wish I had written that song.

“Lean In”:  A Lizz Song On My Favorite Playlist, “Quivers and Eros”

After I listened to “Slow Dance” and “Hooked On Music”, I got that nostalgic feeling, and it made me think of Lizz’s song called, “Lean In”, which was on her CD called, “Freedom and Surrender”, and on President Obama’s list of favorite songs in the summer of 2017.

“Lean In” immediately reminds me of the Disco era and Donna Summers‘ song called, “Love To Love You Baby”.  Listen to both and see you what you think!

It’s the refrain in Lizz’s song where she sings, “Aw, baby it’s alright. Yeah, honey it’s alright”, that makes me think of Donna singing, “Ah, love to love you baby!”

Recently I discovered, on youtube, a recording of Lizz doing a cover of her own song. That song, Dreaming Wide Awake (duet version with Kenny Banks Sr. on piano). It’s such a beautiful rendition of the song. I think this flexibility to do different versions of a song also spotlights her musical genius.

So that reminded me of a story about a pianist I once heard.

There was a man who had a dog, which he taught to play piano. He would take his dog to someone’s house and the dog would play piano to the delight of the audience. Over time, he got a lot of referrals to play at many other houses, so he became known as the “pianist” dog in the neighborhood.

Aw, what would we do without music?

Luckily, we don’t have to worry about that, or answer that question, because someone will always be making it.

Alas, music is my favorite art.