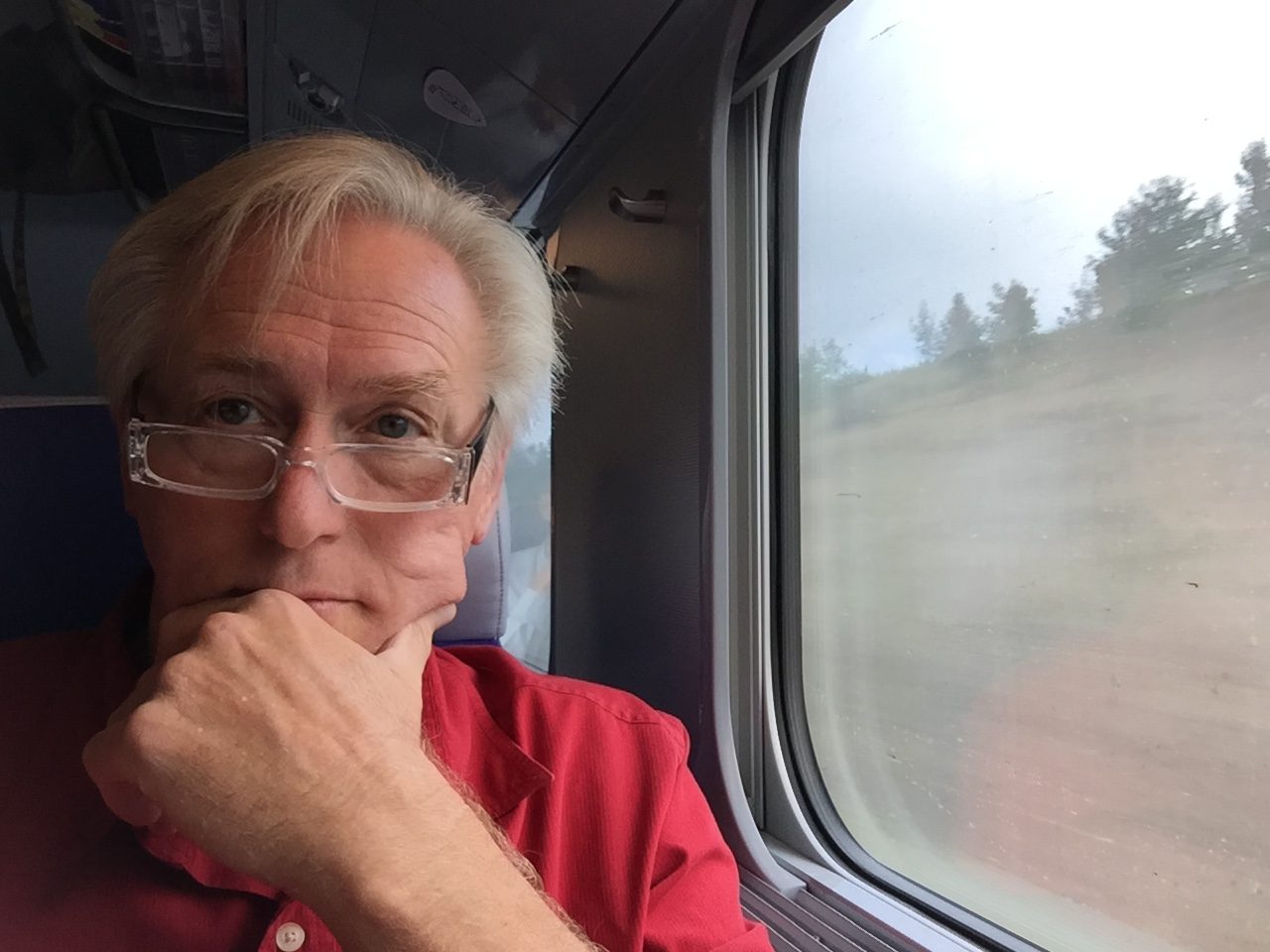 Two of my many interests in life are woodworking and design. I’m still amateur, but the interest and effort to get better at both, continue.

Currently, I drive a bus and transport people with disabilities. One day, I picked up an 80-year old lady to take her to the place she needed to go. I was playing music by my favorite singer, Lizz Wright, and after about three songs the lady asked curiously, “Who is that singing?”.

Lizz was coming to Jazz Alley about that time (September, 2015) and I had front row seats for my son, Tim, my daughter-in-law, Pauline, and I.

I bought another copy of Lizz’s newly released CD, “Freedom and Surrender” and took it with me to the show. After the show, I got in the autograph line to get her signature on the CD. 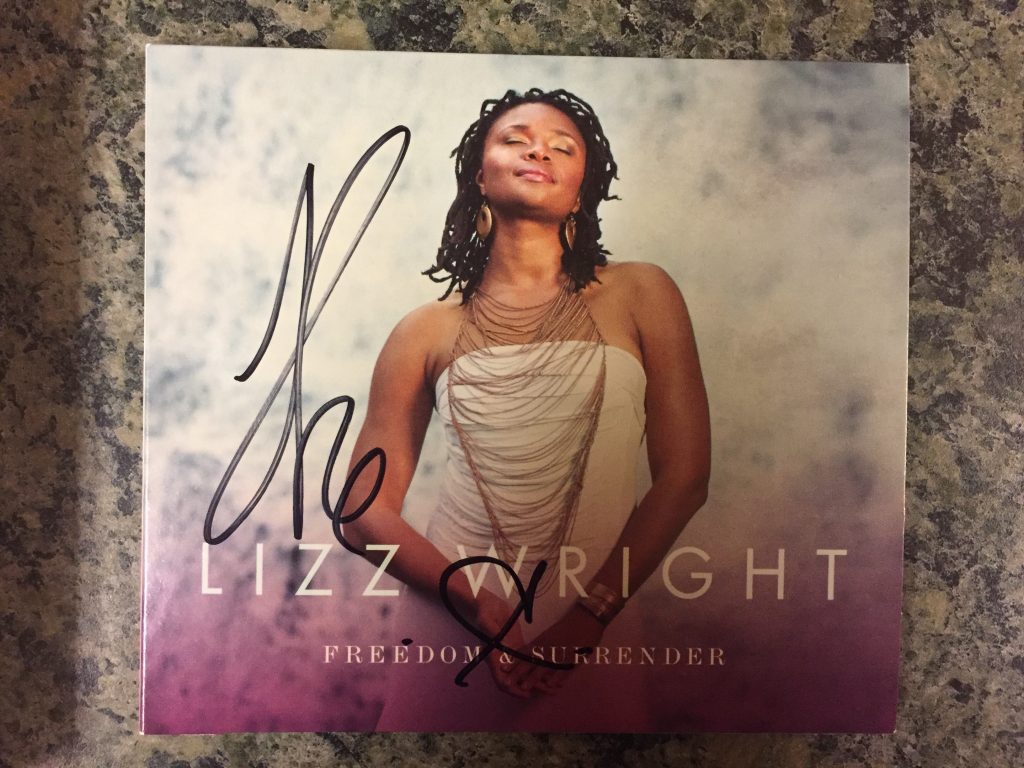 After that, I took it with me to work everyday, hoping to run into that sweet little old lady again. I didn’t remember her name or where she lived so I couldn’t just give it to her. But, unfortunately, I never saw her again. She never rode my bus again.

So everyday, for a few months, I’d take that CD to work, hoping to see her, and then bring it back home and set it on my desk until the next day.

But seeing it on my desk everyday, I became intrigued by that “Chinese character” Lizz signed on the CD jacket.

At first glance, it looks like “The Lizz Wright”, right?

But after about eleventeen views and a few sips of wine later, the L and the W appeared. 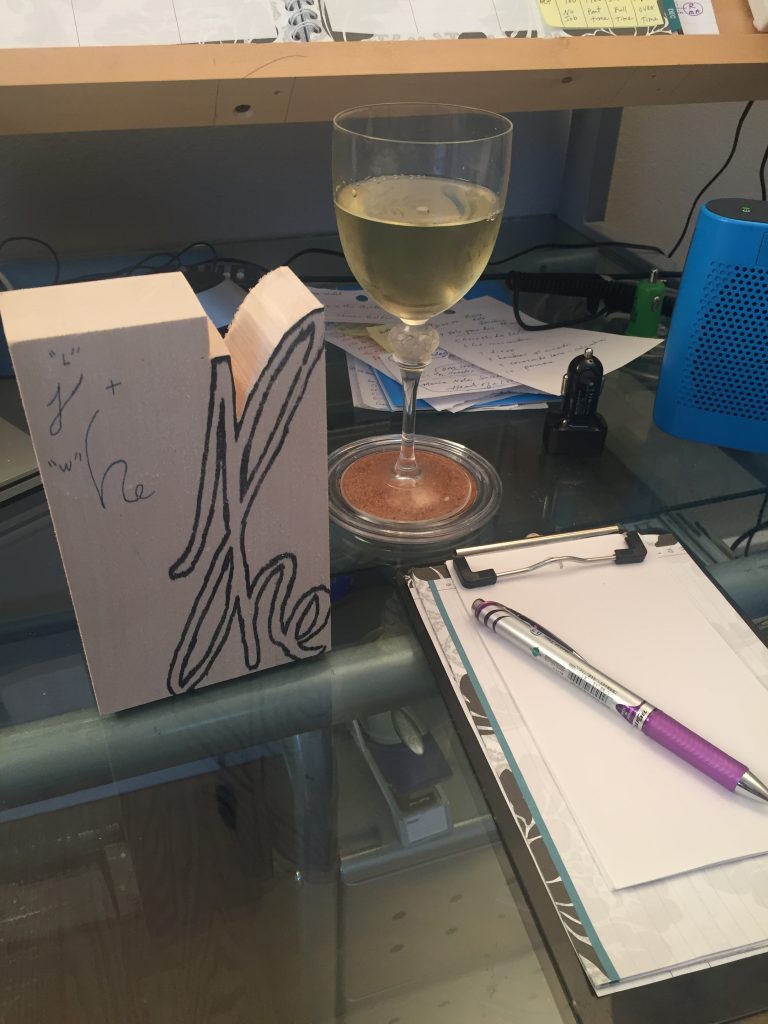 I was inspired from that moment on. The LW signature made me start dreaming wide awake.

I sat down with a pencil and paper (that’s how I like to collect my thoughts) and I selected LW from my iTunes library and hit “shuffle” so the songs from all of her five CD’s would play randomly. (This was before her sixth and current release, “Grace”.)

As her songs began to play, I thought about her artistry:

I also thought she must be an avid reader, from some of the things she has mentioned on her FB page, but also because of the articulate manner with which she speaks. I imagined her reading two or more books simultaneously and not being able to finish even one of them due to her busy schedule.

Then I imagined what her one-dimensional, line drawing of LW would look like in 3D, as bookends, to hold a few books she was currently reading. Or to hold a few of her favorite books. Or to hold Aretha’s “Amazing Grace” CD and other CD’s she might favor.

At this point, it became more than just bookends, in my mind. I began to think of it as a unit. A mini-shelf with bookends, which could be easily lifted, books and all, and repositioned anywhere she wanted it. On a desktop, mantel, or coffee table, etc. 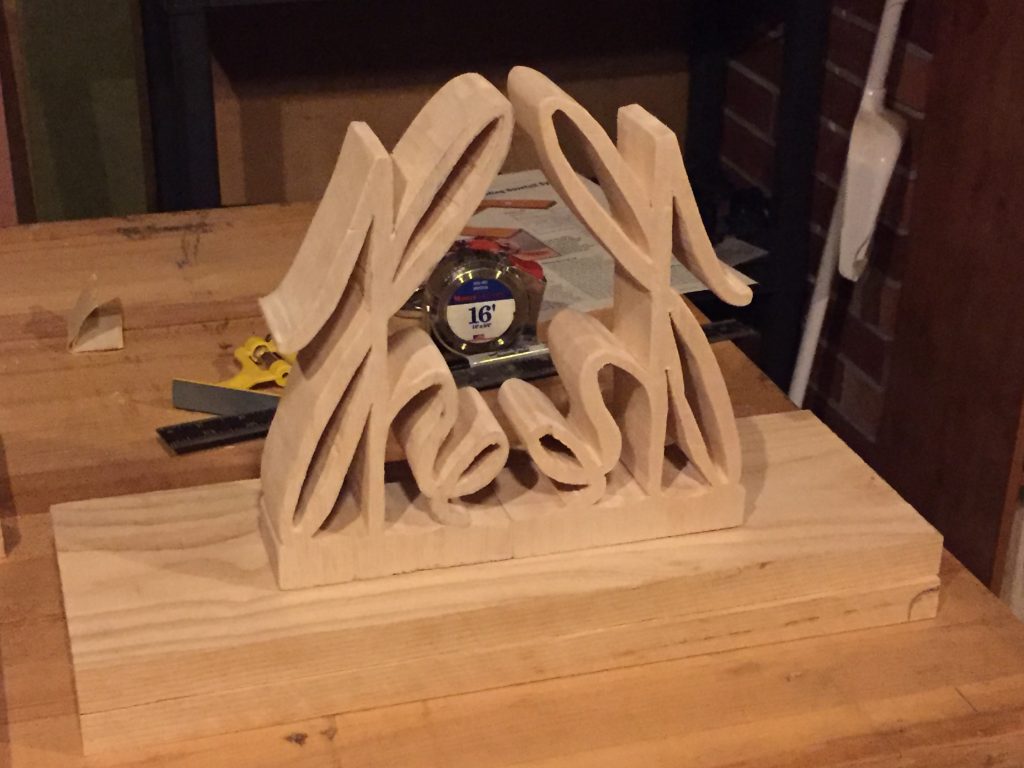 So I quickly grabbed my pencil and made this perfectly imperfect working drawing of the bookends and base, to refer to later when I actually made them in my shop. 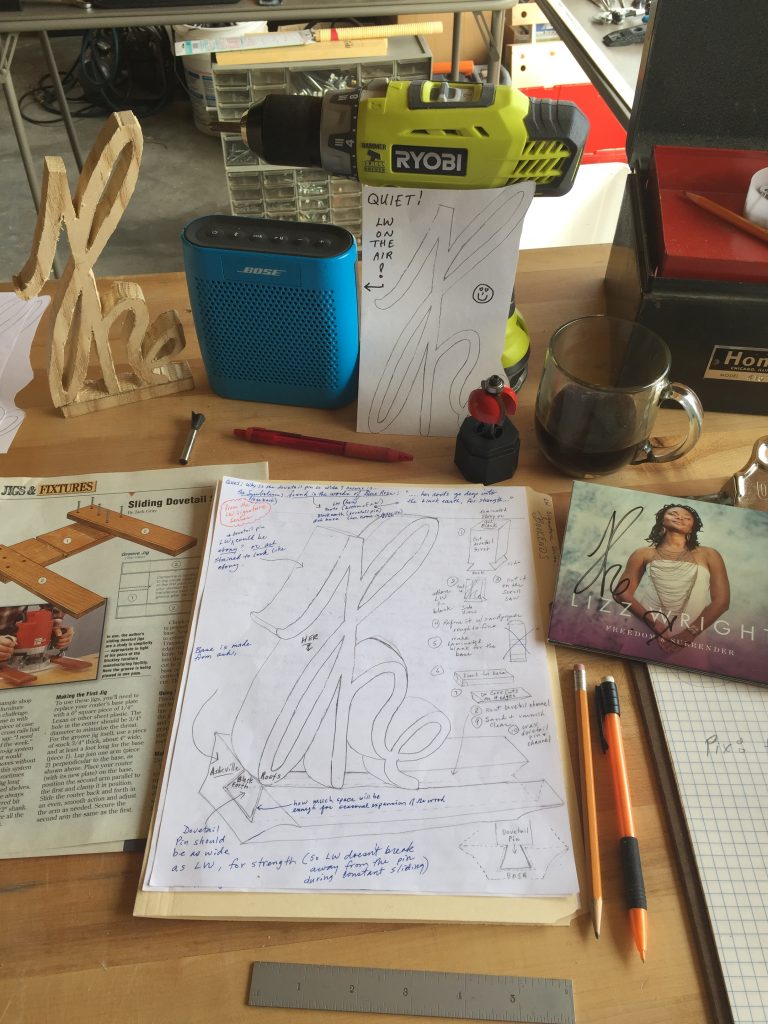 The working drawing allows me to address any questions about the project that linger in my mind.

As I was contemplating what type of wood to use for the base and the bookends, what color (if any) I wanted to make them and how to make the bookends heavy enough to hold books securely, 🎶“Blue Rose” started playing 🎶 on my little Bose speaker.

…..I got my answers and a “green light” to start making the project! 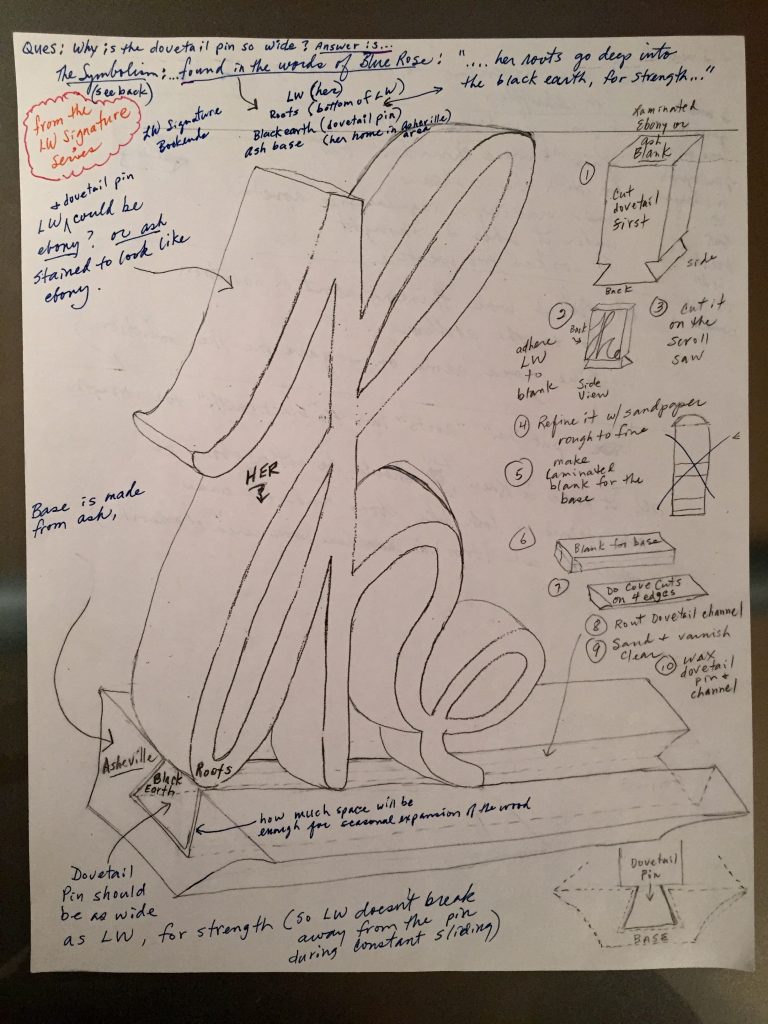 Now back to the answers that “Blue Rose” spoke to me. (Refer to the working drawing as you read the following):

“Her” is LW and she will be made of ebonized basswood. (I wanted to use ebony, initially, but I learned it is a protected resource, unavailable in the size I needed and is a very dense wood and hard to work with for the type of project this was. I thought basswood would evenly absorb and show the black stain well and it is light and easy to cut.)

“Her roots” (the bottom portion of LW) would “turn into” dovetail pins (“go deep into the black earth”). So the LW and dovetail pin would be one unit cut away from a single board.

“The black earth” would slide along a dovetail channel along the top of the base, which would be made of ash, to represent Asheville, the community of support (“for strength”) where LW currently resides. Using sliding dovetails would allow books to be held securely.

Since the sliding dovetails are adjustable, they could accommodate one or more books equally well. So they provide flexibility (“and she blooms”).

After thinking about the bookends for awhile, I might have come up with that solution on my own, anyway, but how cool is it to get the answers serendipitously, through the words of her own song, right?

Next, I went to the shop to start making the mini-shelf. First, I practiced with ash, balsa and basswood blanks to see how well they cut and to get an idea what they would look like, in reality, next to books. 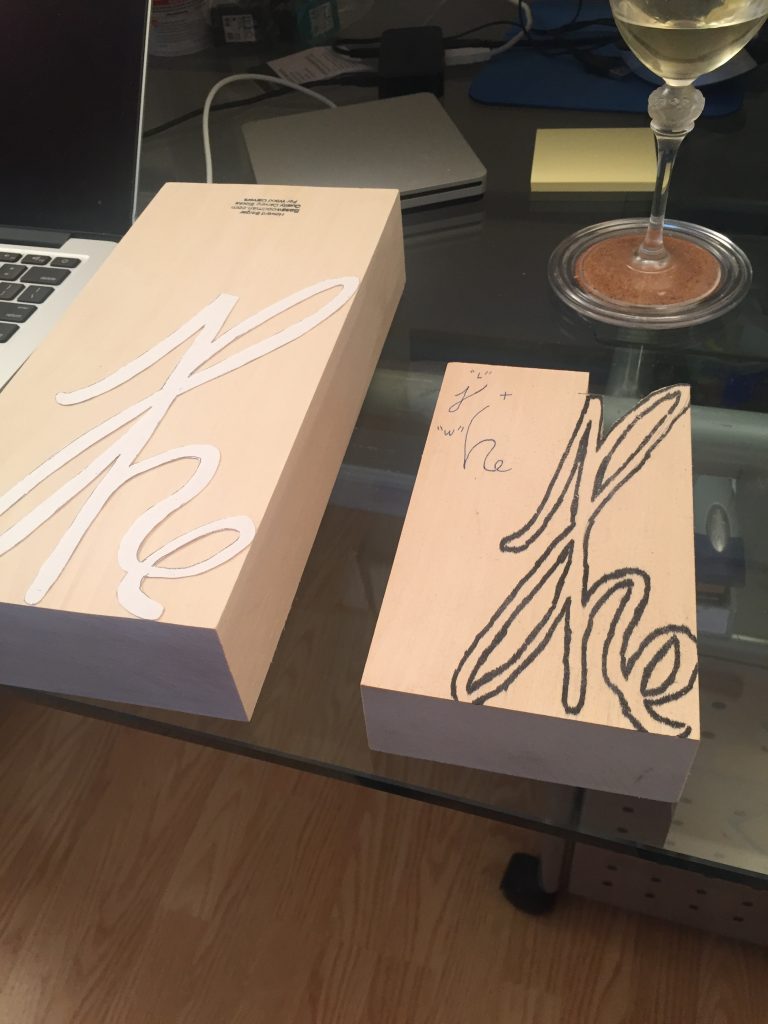 Both of the above blanks are basswood. One pattern is tall for books and the other pattern is shorter for CD’s. 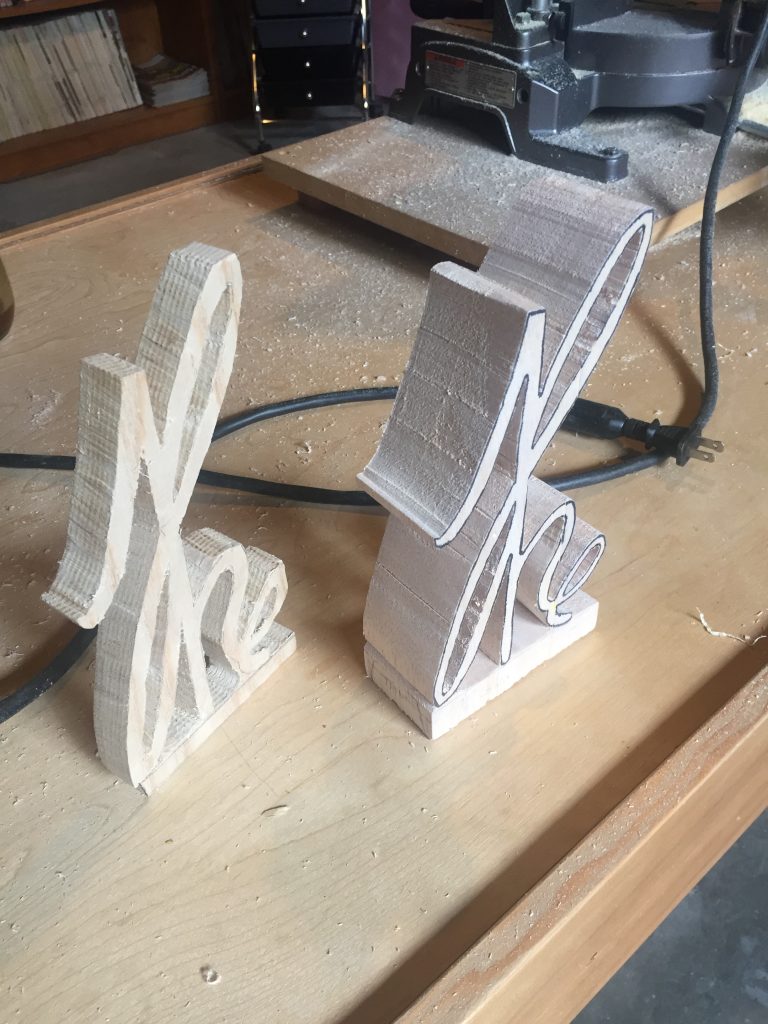 The left practice cut is from ash. The right one is balsa.

One day, I walked into the shop and “caught the ash and balsa LW’s shamelessly shadow dancing!” 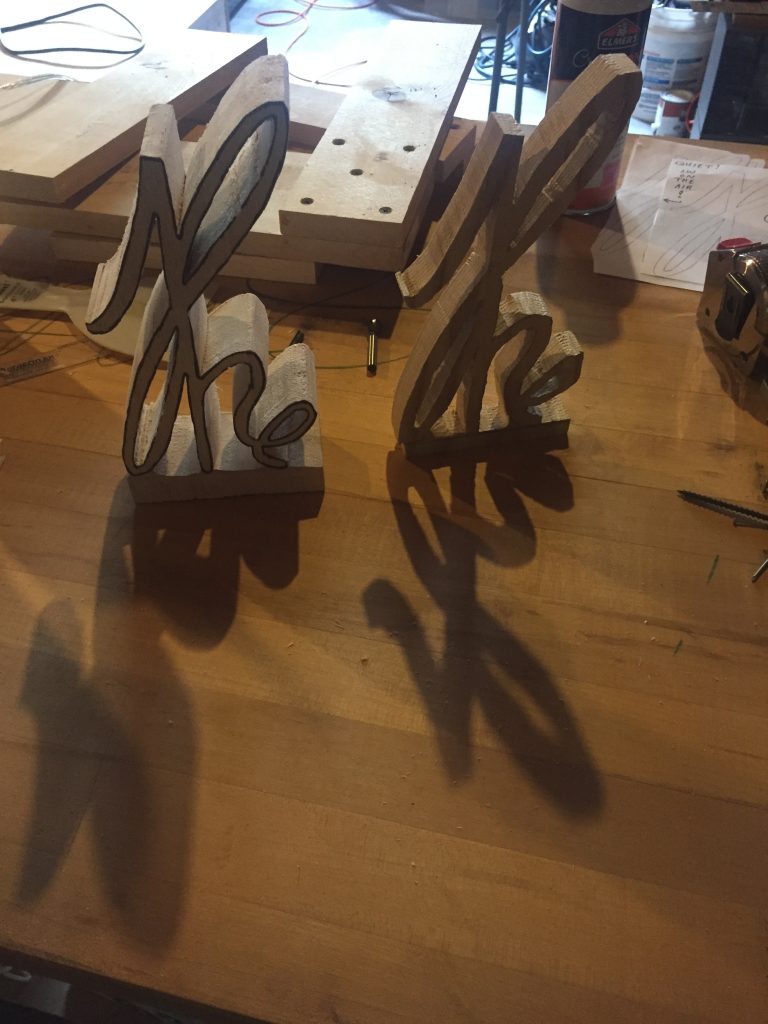 Next, I did a trial display to “get a visual” of CD’s and books on the shelf and see how many they would hold. 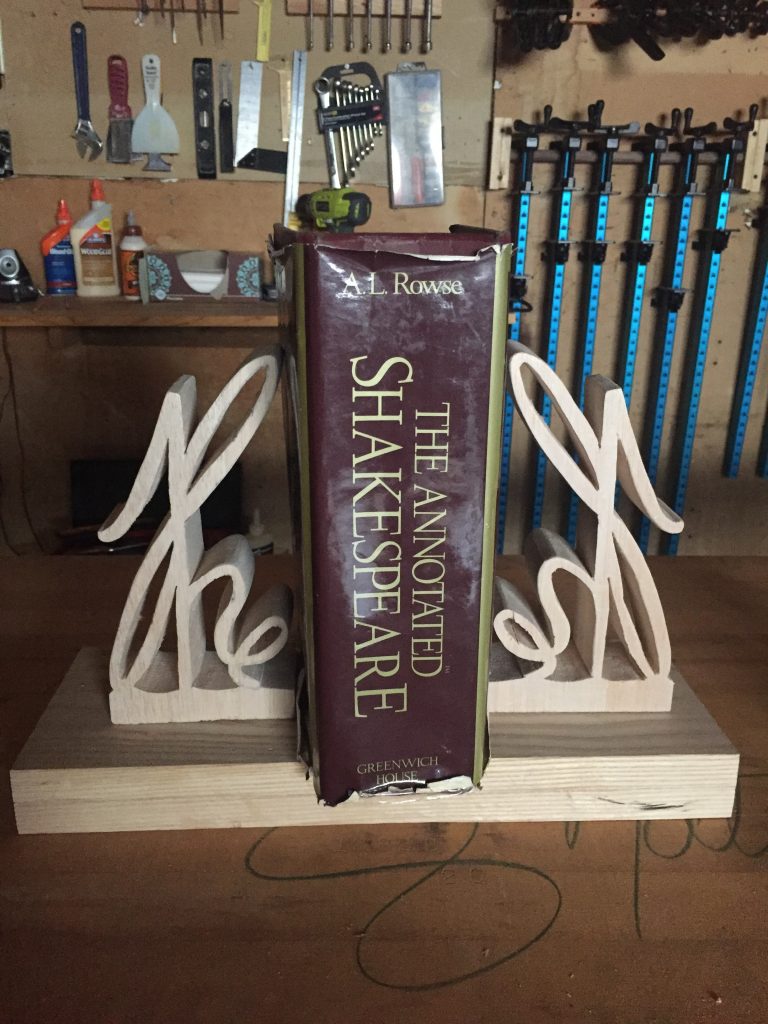 It could hold one or more big ones. 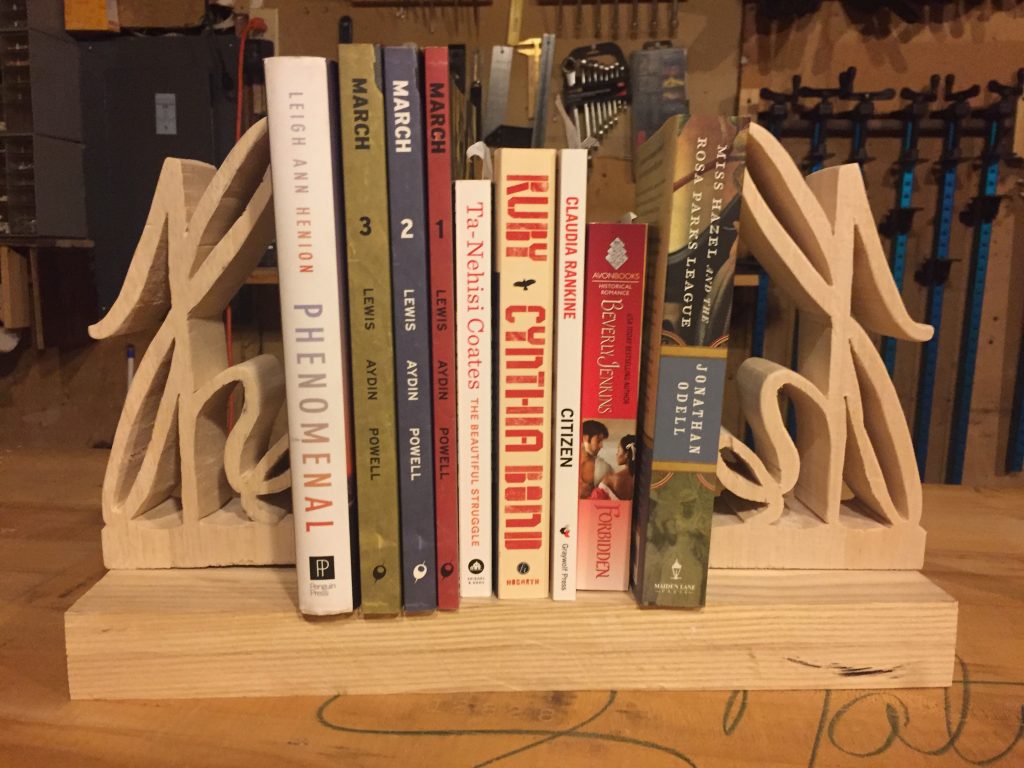 Here it holds up to nine books. 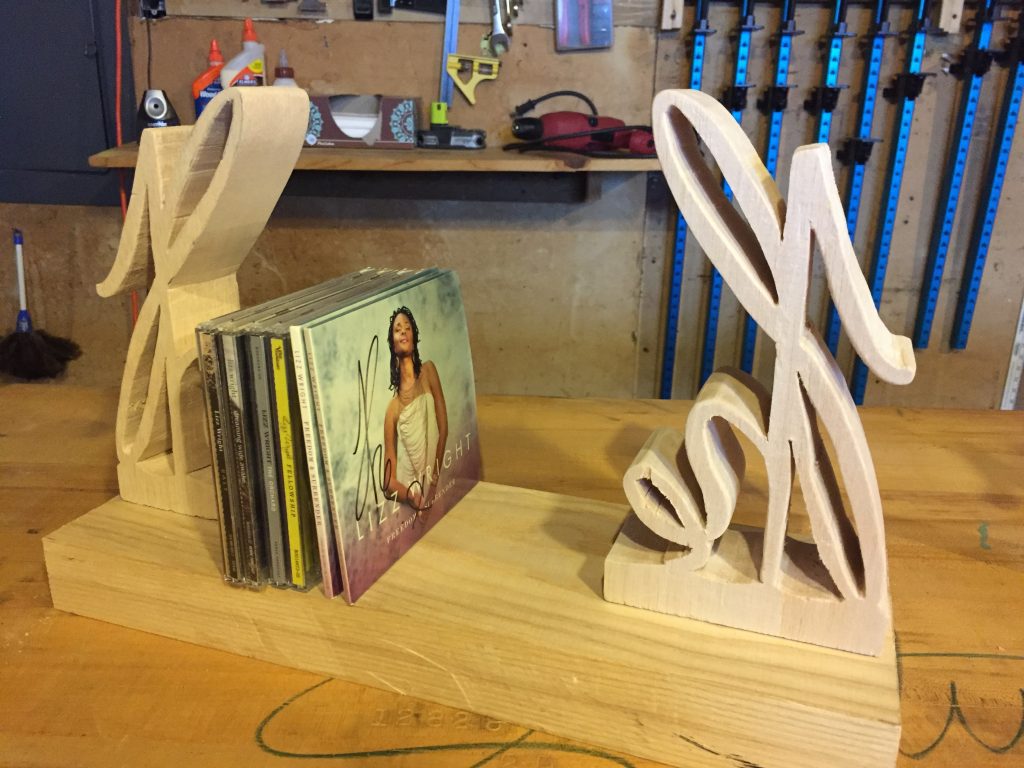 And here it showed me that I need to do a smaller version of the LW’s to hold CD‘s.

By the way, did you notice the “available space” to the right of Lizz’s first five CD’s. Can’t wait till that’s filled up with more of her music.

After experimenting and practicing, I made one large bookend and two small bookends.

I wanted to give Lizz one large and one small one.

And I wanted to keep the other small one for myself to put on my desk in my office, as a dedicated space for only Lizz’s CD’s and as a reminder of how much I love the creative process and serendipitous moments.

So, in August, 2017, I went to Lizz’s show in Chicago to see and hear her sing. I wrote about that trip in a post called, (Truth, Racial Healing and Transformation). She had mentioned to her fans on her FB page that if they were ever in Chicago, to stop by the Little Black Pearl and say hello.

I had been wanting to go see the Little Black Pearl so I thought I would stop by and say hello and give the two bookends to her then. But, unfortunately, she was busy and there just didn’t seem to be an appropriate time to give them to her. So I just left and returned to Seattle.

While I was sitting in the Little Black Pearl, having a smoothie in Carver 47 (the experimental juice bar inside), the thought occurred to me that the large bookends could find a home in there as part of the decor and hold a few of George Washington Carver’s books. Carver 47 is named after him.

Then, in April, this year, when I went to France, Hungary, Austria, and Switzerland to see and hear her sing, I took them with me just in case I had the chance to give them to her. But I never did have a chance.

Lizz is so inspiring to me in many ways.

Her artistic rendering of her initials is just one of those ways.