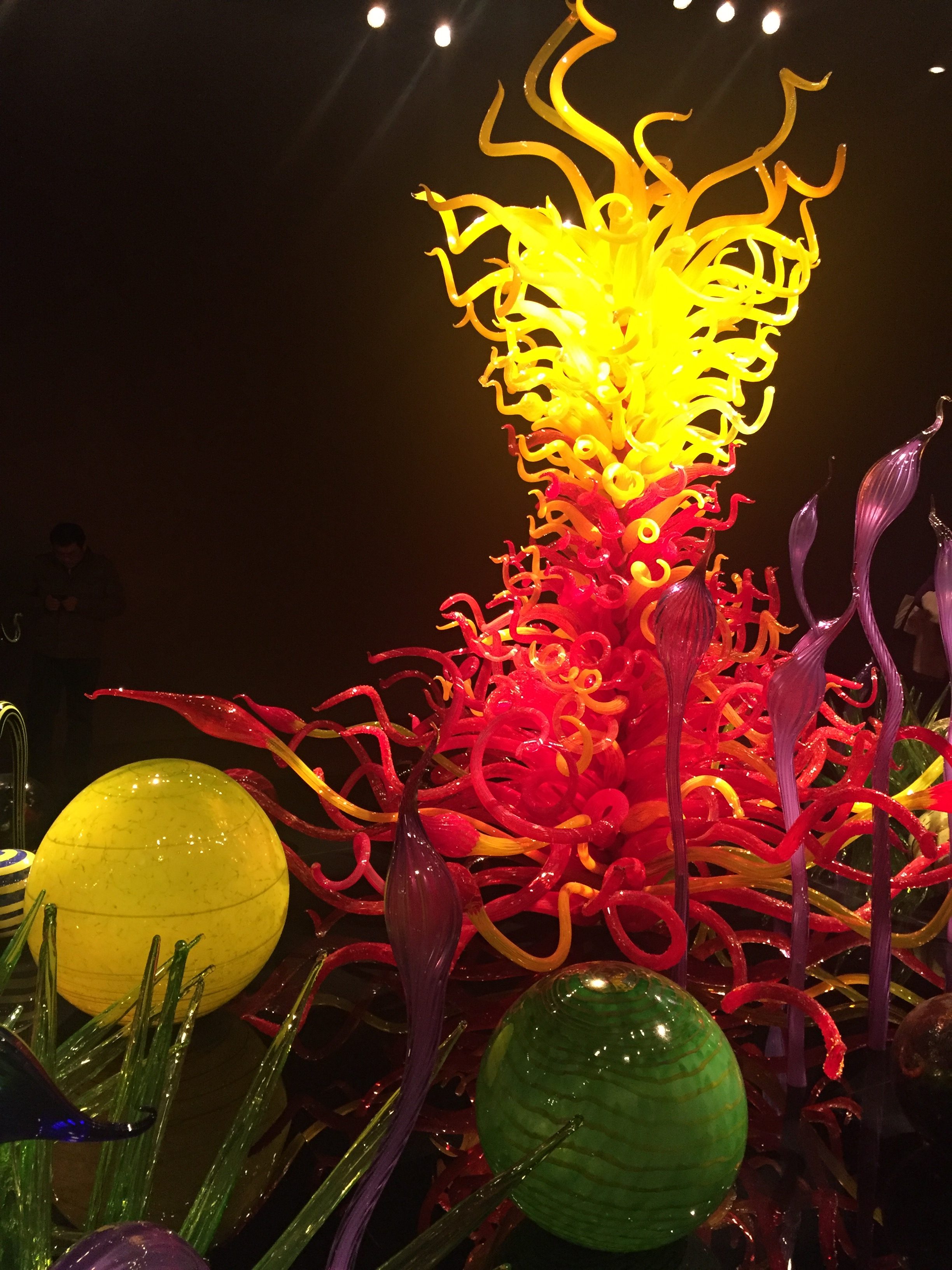 About four years ago, I was one of those people. I noticed the beauty all around us but didn’t take the time to really look at the uniqueness  of each and every flower I passed by.

I was amazed at the variations in texture, color, shape, size and design. I never had really looked closely at the details before.

I thought to myself, “Holy Macro! There is just no monotony in Botany!” I wrote about that in a previous post called, “Let Your Light Shine”. 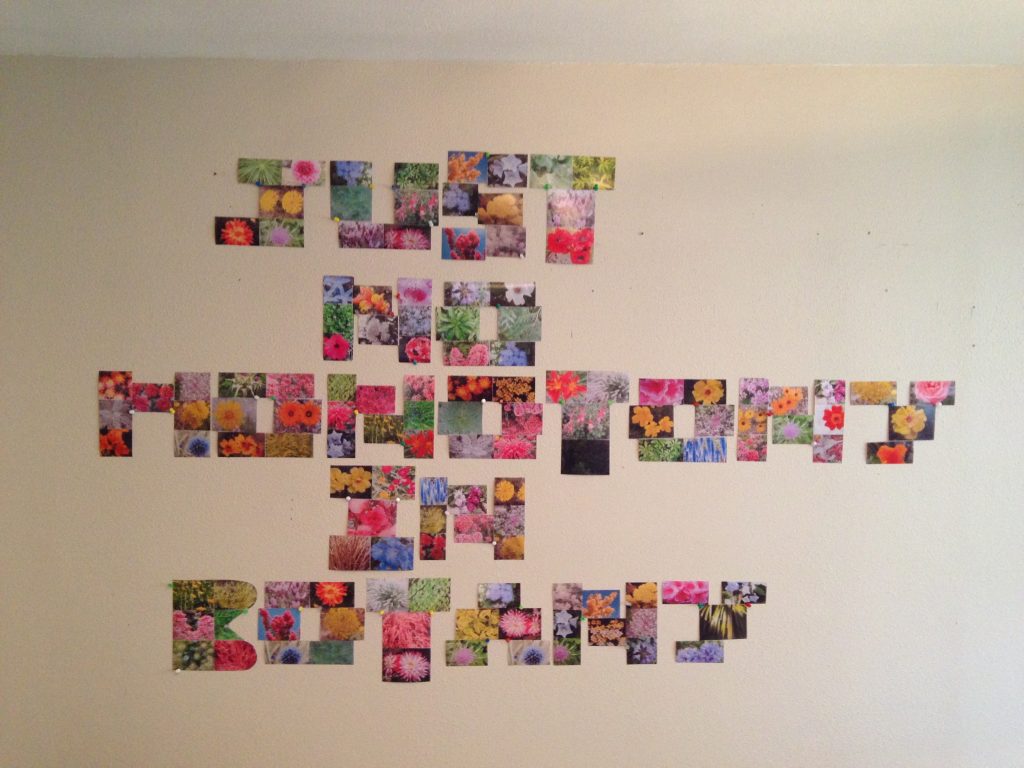 I used to have that database of over 600 flowers but last year when the inconsiderate one  broke into my house and stole my laptop I lost all of it. I mentioned that in “WEEPLESS IN SEATTLE……but still bummed out about it, nevertheless”.

But I had printed out several photos of some of those 600 flowers and I still had those. And I can always go back out and take more. But for now I just put a few together and took a photo of them just to show you the kind of variety and beauty I’m talking about. 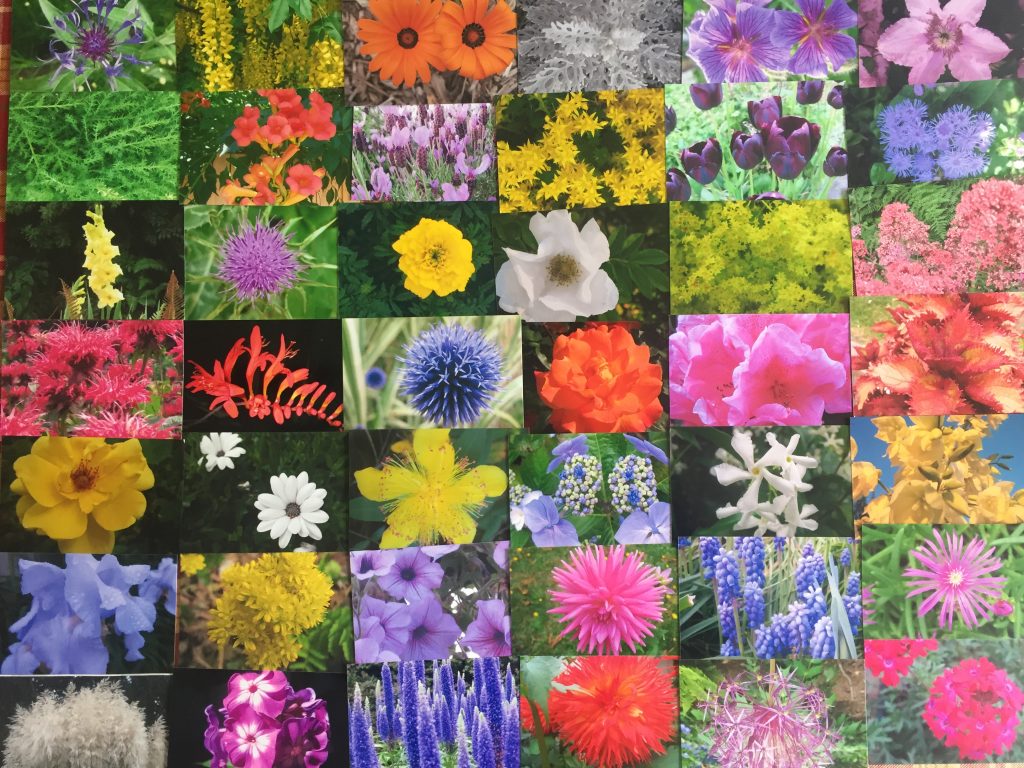 But it’s still rainy, windy and chilly here in Seattle so it doesn’t feel like Spring yet.

In my last post, “What Moves You?”, I talked about new beginnings in connection with my recent move to a house located a little bit further north from Seattle.

Spring signals new beginnings! I’ve always wondered why we didn’t consider April as the first month of the new year, instead of January. (I guess if I googled it I could probably find an answer to that.)

But I personally feel like the year starts when Spring starts.

Soon I will find myself back outside with a basketball in my hand, eagerly soaking up the sun, while thoroughly enjoying this athletic ability I was born with. 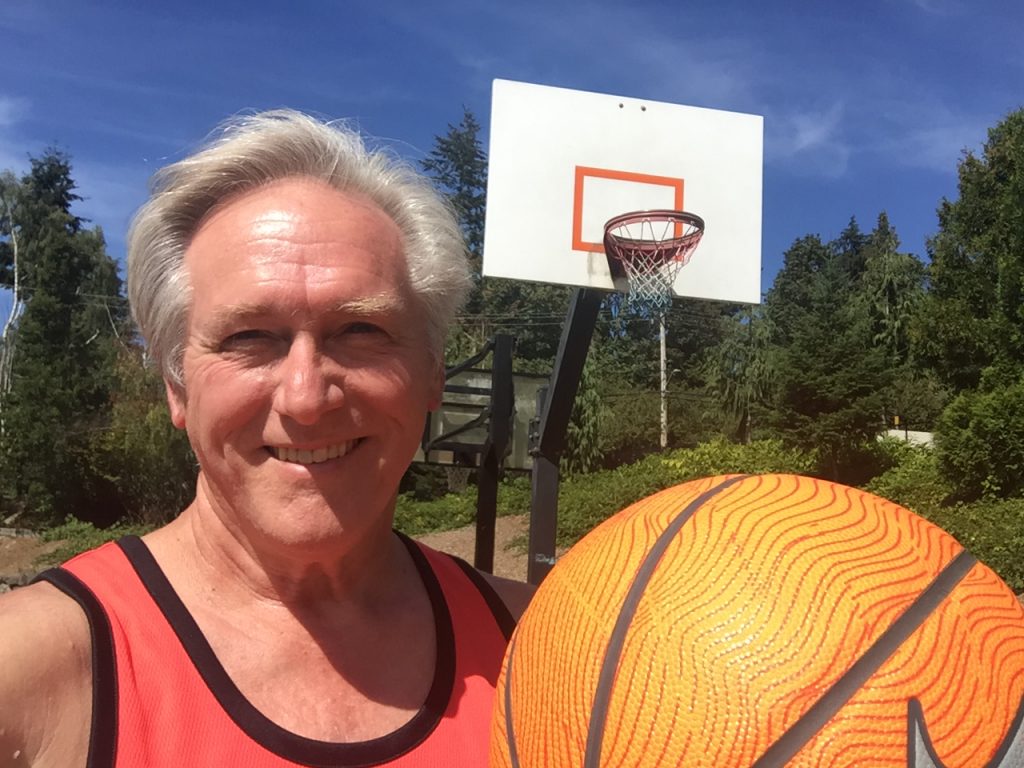 Last September I took two basketballs with me to Paris, France, so I could play at a court by the Eiffel Tower when I got there (that video clip is in a previous post called, “Paris and Barcelona, Part 2”)……….. 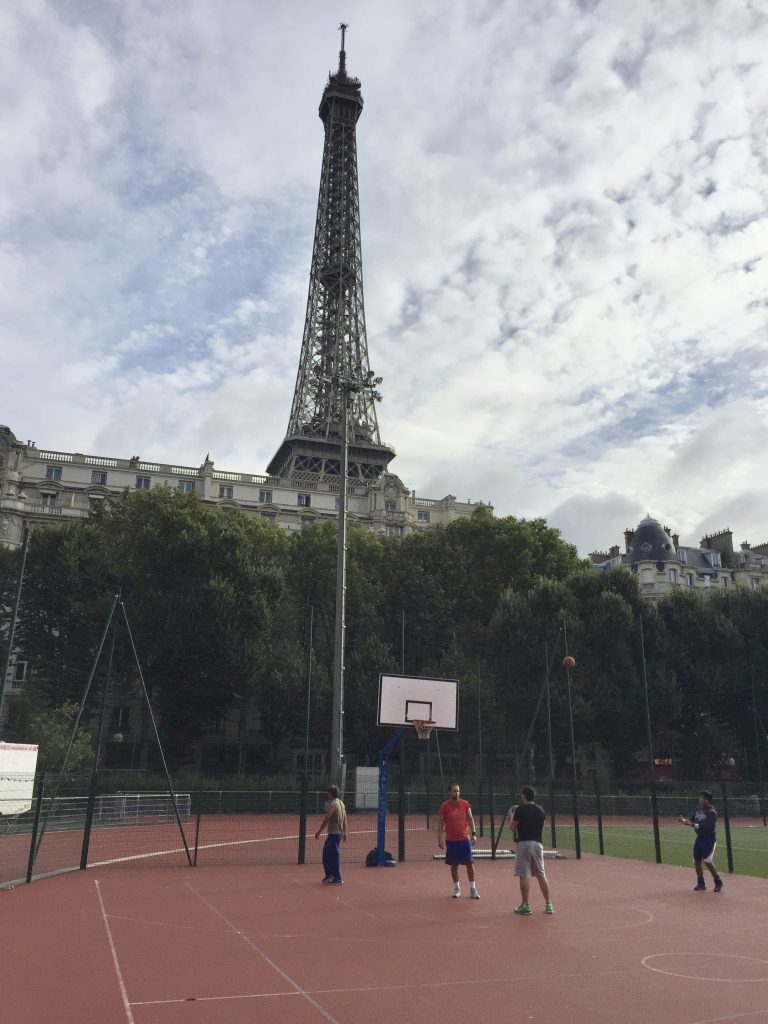 I had deflated both balls so I could fit them into the suitcase. After my family and I had arrived at our apartment in Paris, I took the balls out of the suitcase to inflate them.

My little granddaughter, Evie, wandered into the room and saw them and asked me, “What’s that, Grandpa?”.

I picked up one and put it on my head and said, “It’s a basketball hat!”

She picked up the other one and donned it too. Tim quickly snapped the picture of us. Then, of course, I inflated them and told Evie what they were really for. 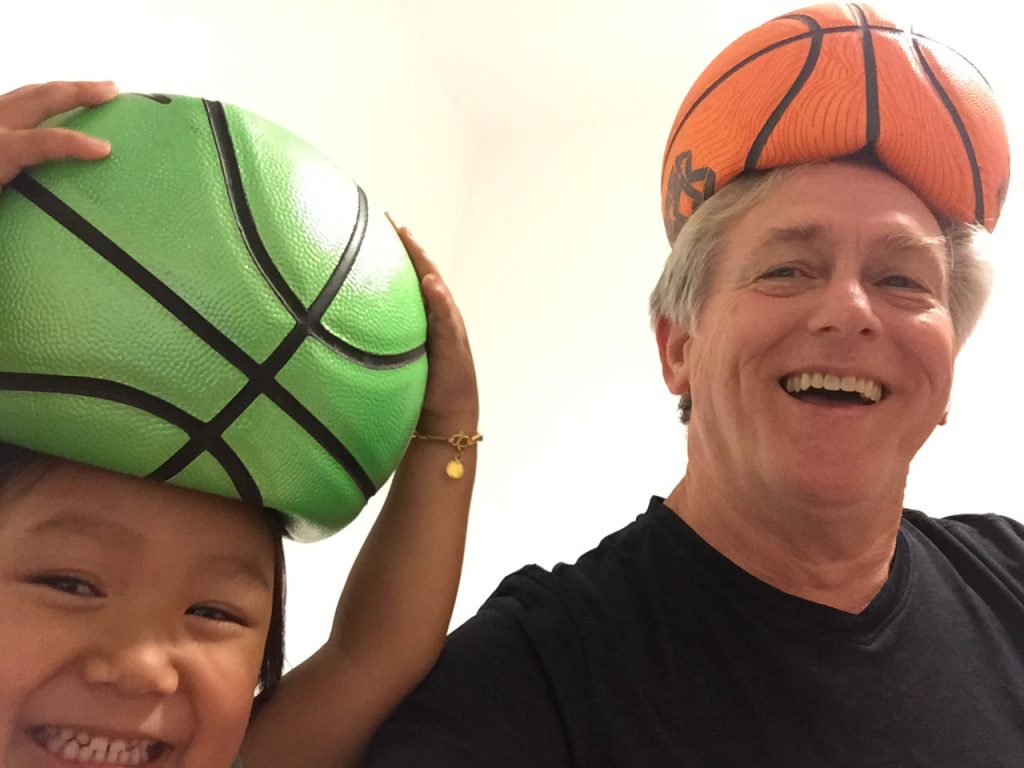 This post is all about Spring, the colors and brilliance of Spring,  rebirth and new beginnings.

As I was thinking about the coming of Spring and looking forward to watching Nature come alive, my thoughts turned back to Winter for a moment, as I recalled a visit to a museum with my sister.

Last December, my sister came up from Texas, to spend Christmas with us here. While she was here, I wanted to take her to some places locally that she might enjoy.

One day we explored the Chihuly Garden Glass Exhibit, located adjacent to the Space Needle. 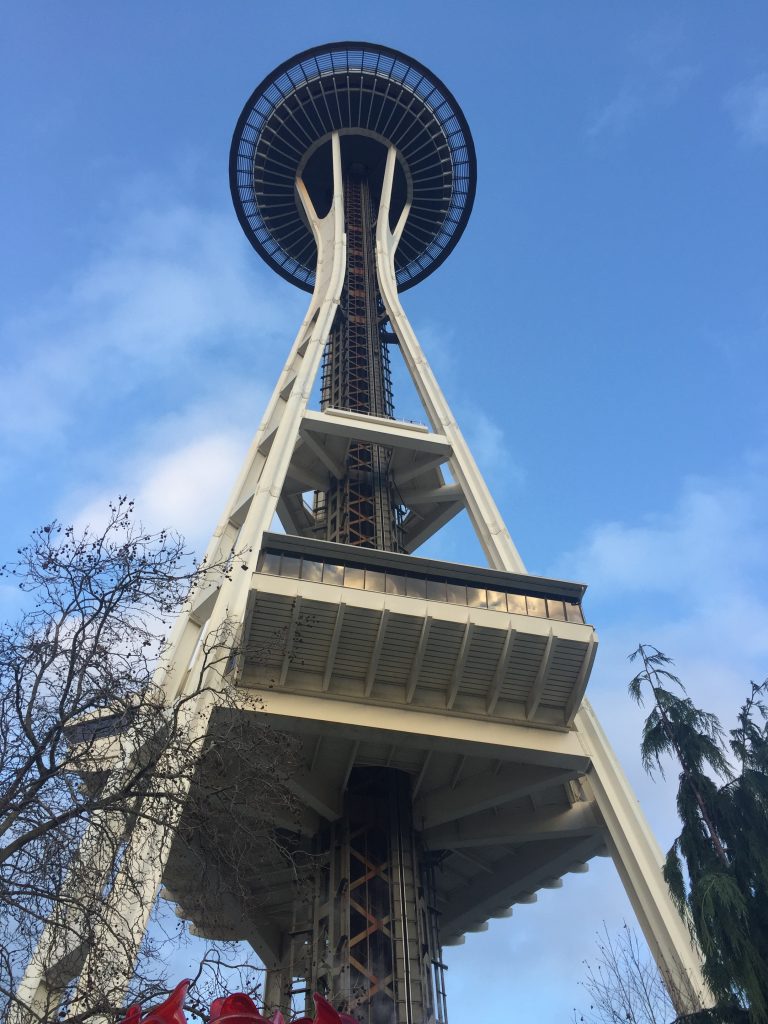 I have been in Seattle for a few years now but had never been there even once. So it was my good fortune to take her there that day.

Dale Chihuly, has become well-known for his elaborate, brilliant and colorful creations using glass as the medium.

Growing up, he always had an affinity for conservatories.

So in addition to creating elaborate pieces to display on the floor, the walls, and the ceiling of the Gallery, he also had a Glasshouse built.

It’s a 40-foot tall glass and steel structure next to the gallery, which includes other monumental sculptures and installations of his art. 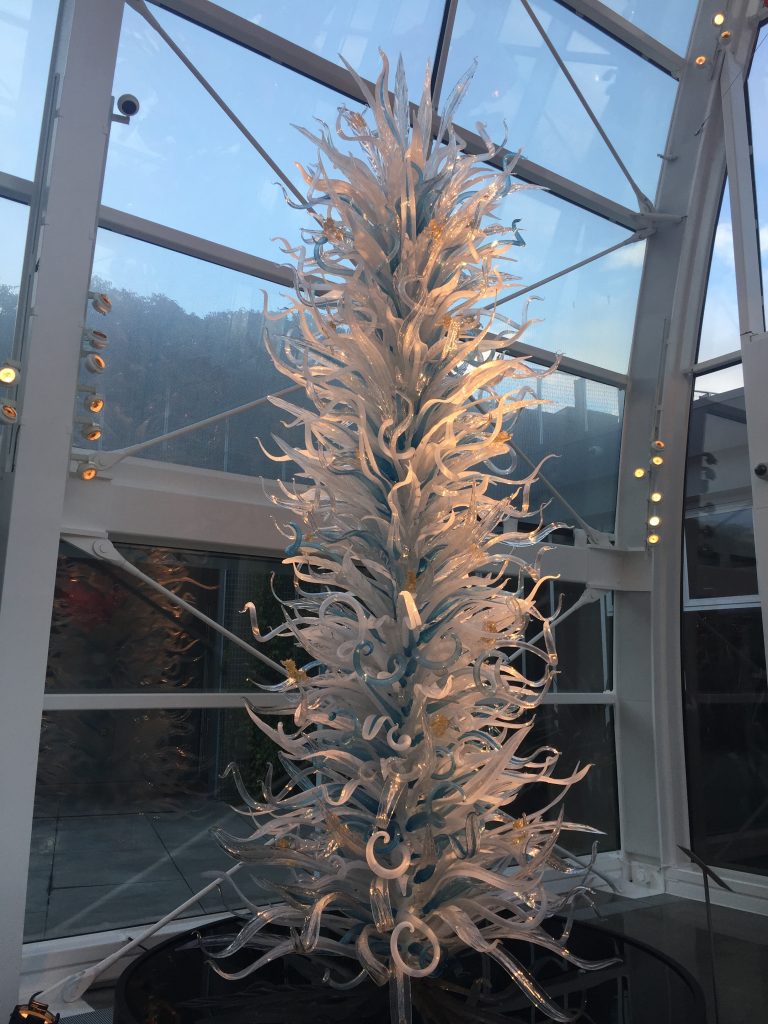 But there is also The Garden, which is outside the Glasshouse.

I think we spent about an hour and a half looking at everything and then we decided to have lunch at the Collections Cafe, which is also inside the Gallery. The menu offered many delicious dishes to choose from. We enjoyed eating there. It was a little expensive but not bad.

As you begin the walk through the gallery, it starts with…. 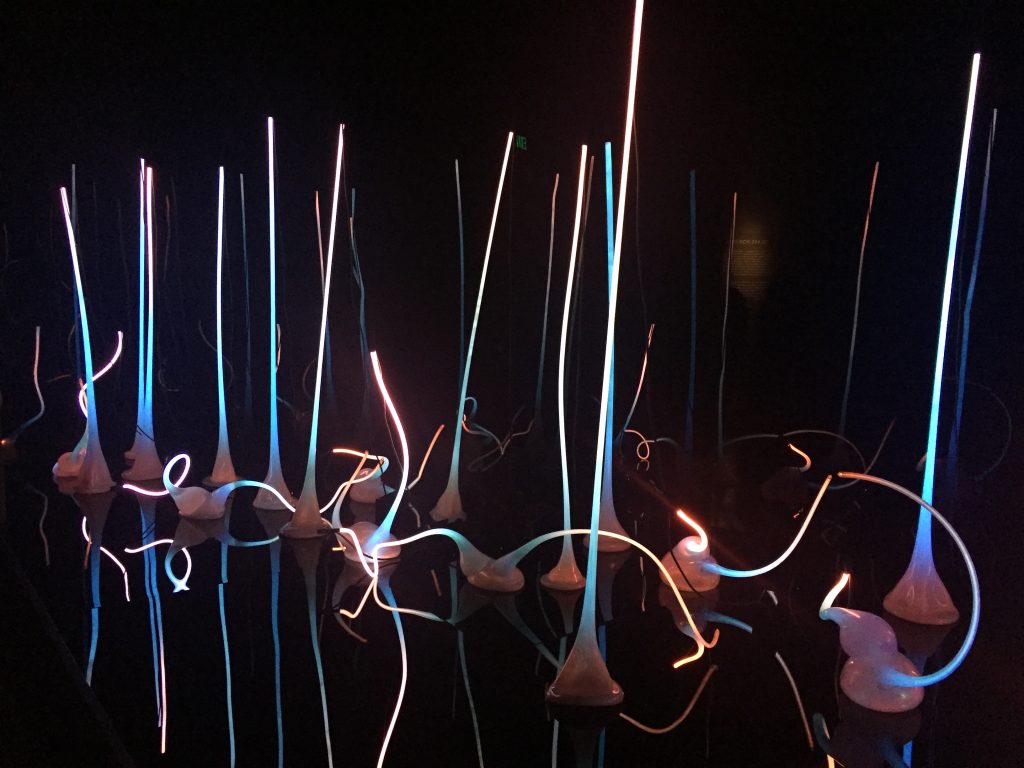 Then to the Northwest Room… 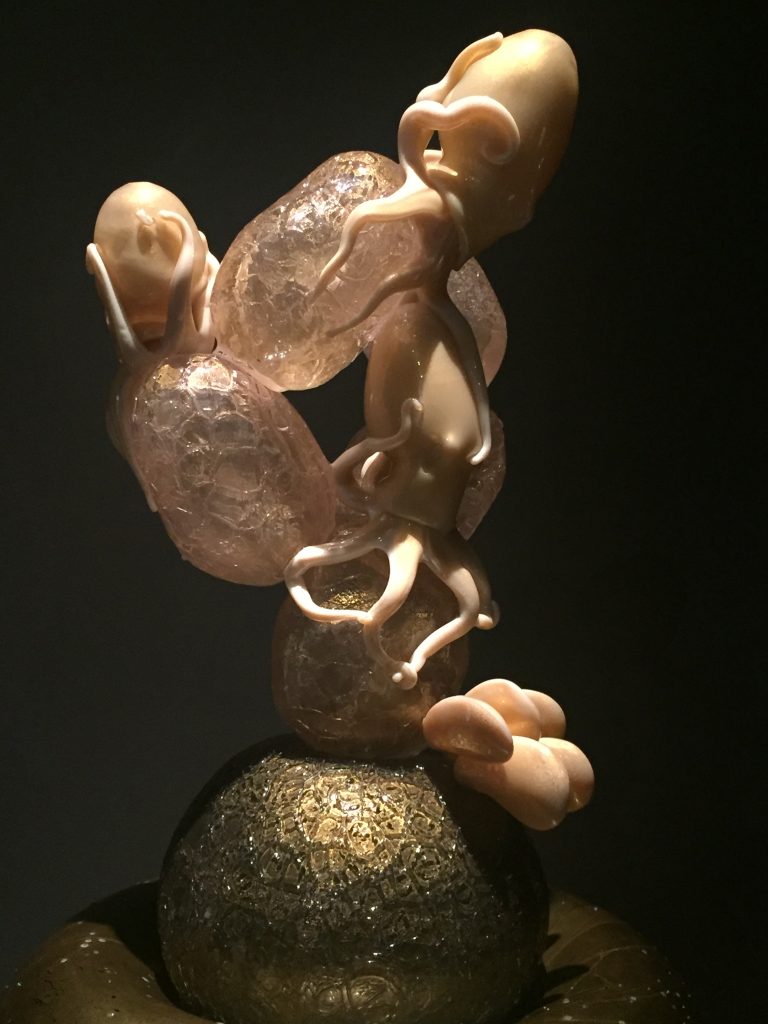 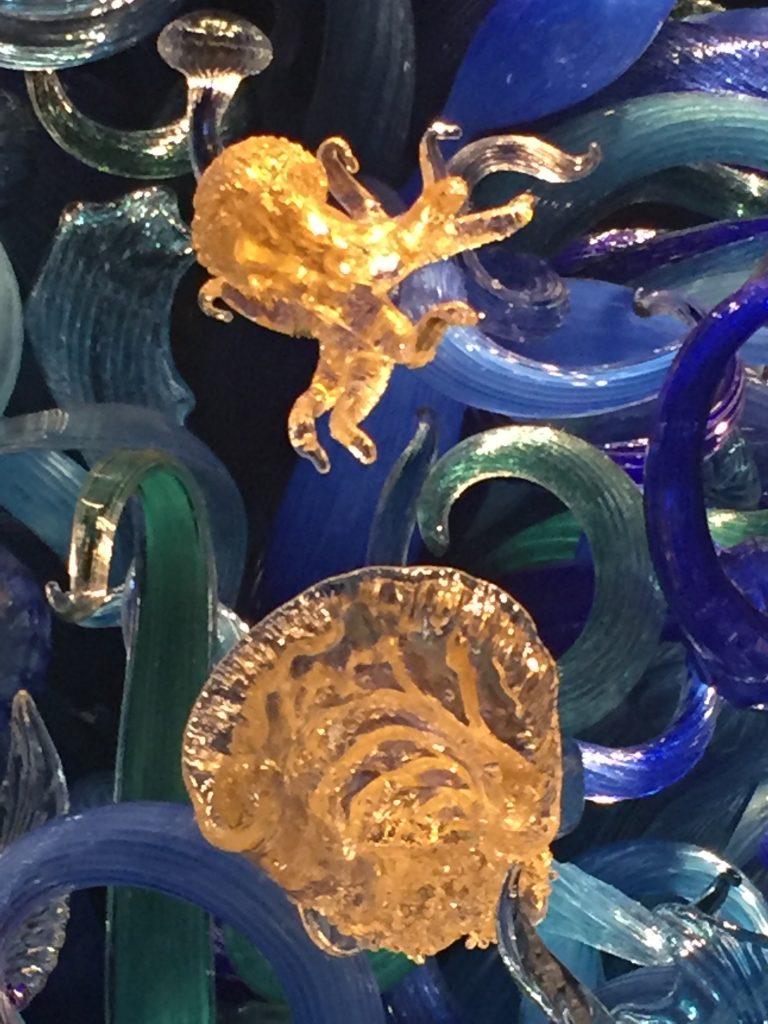 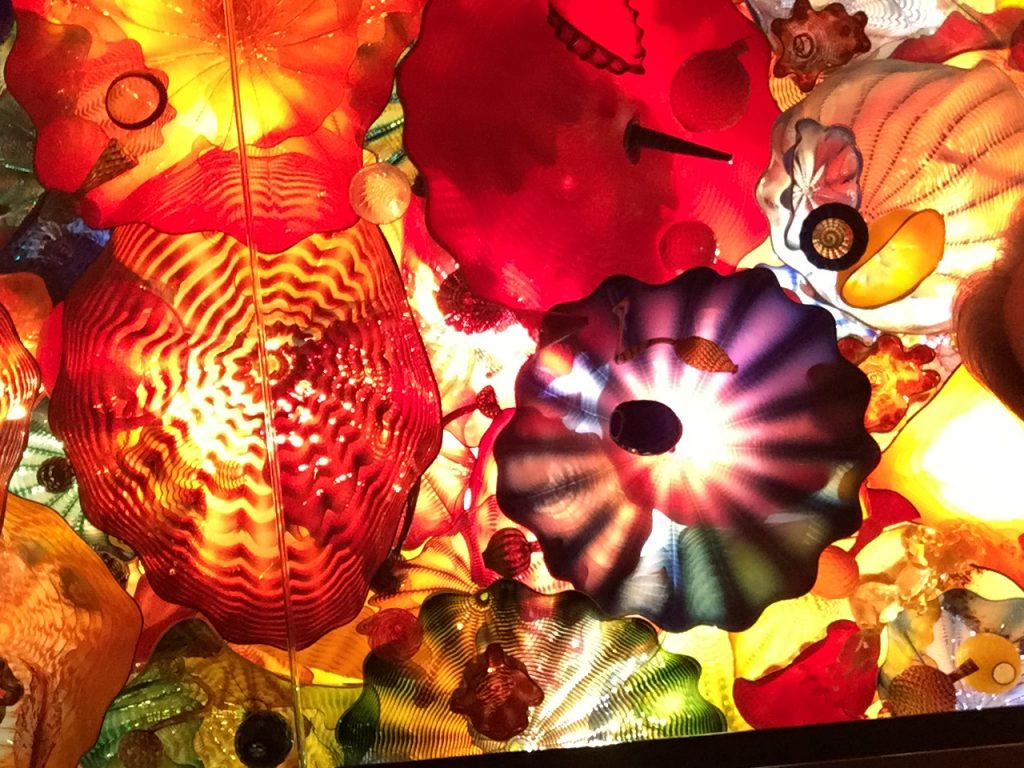 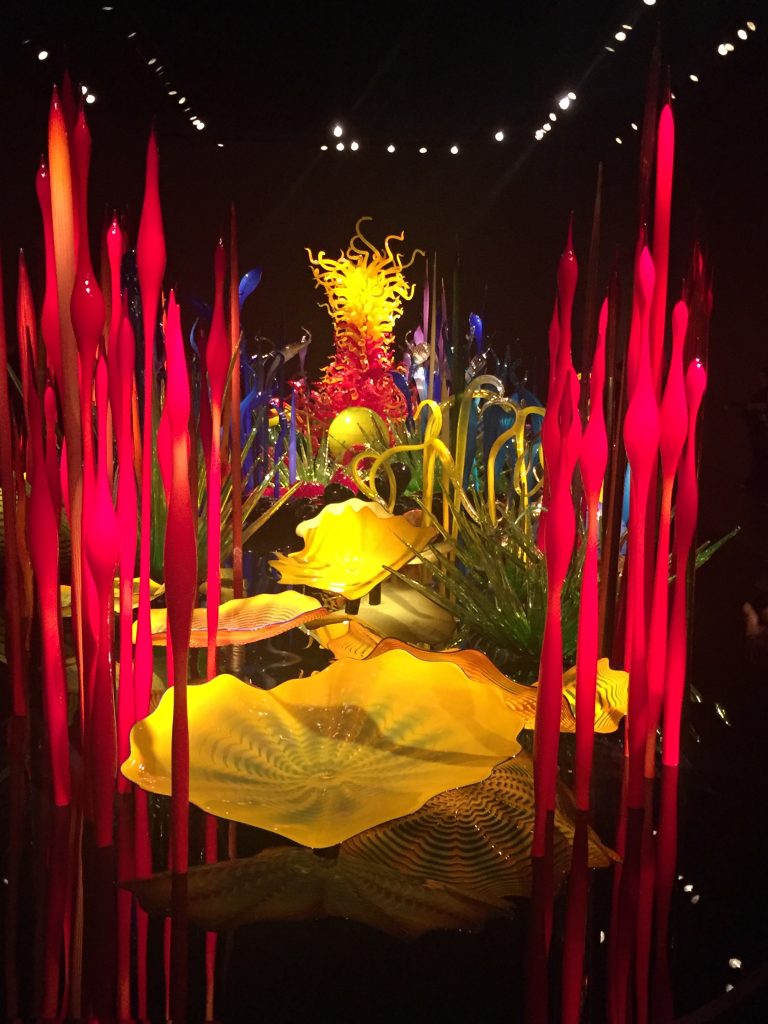 The Ikebana and Float Boat…. 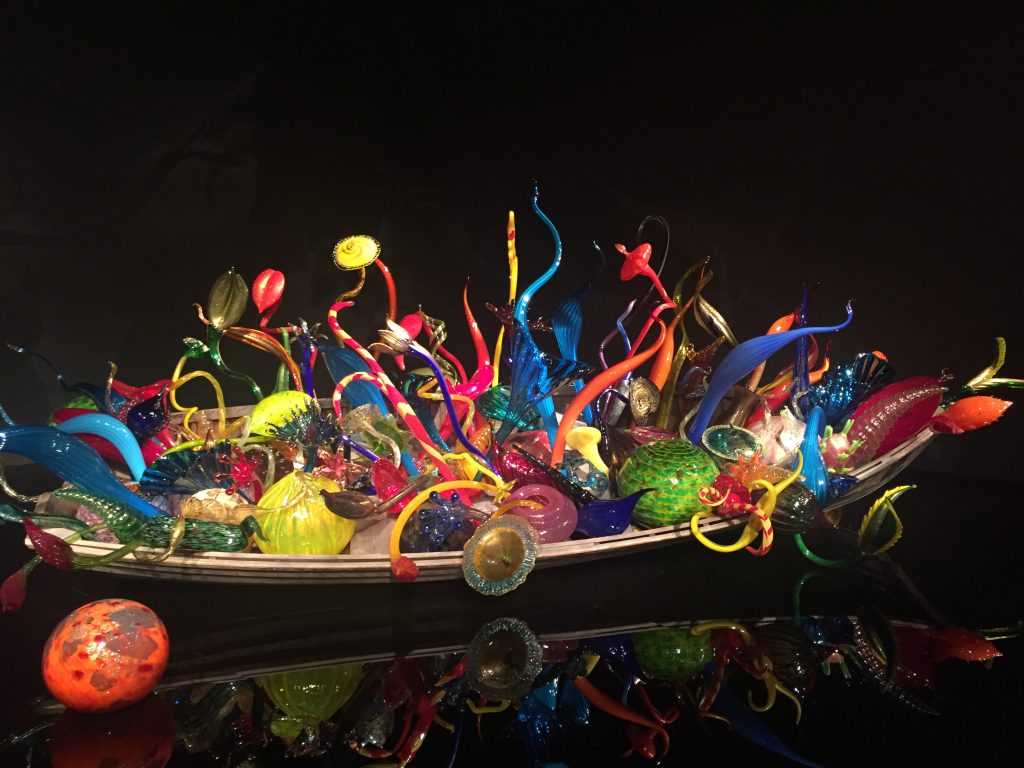 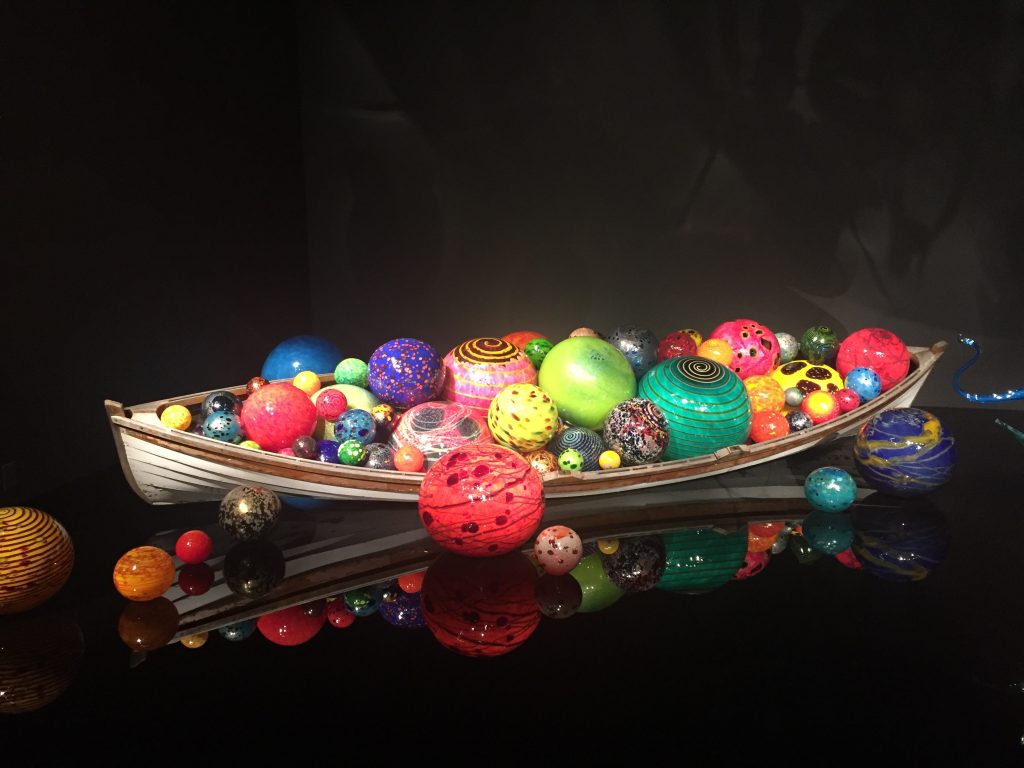 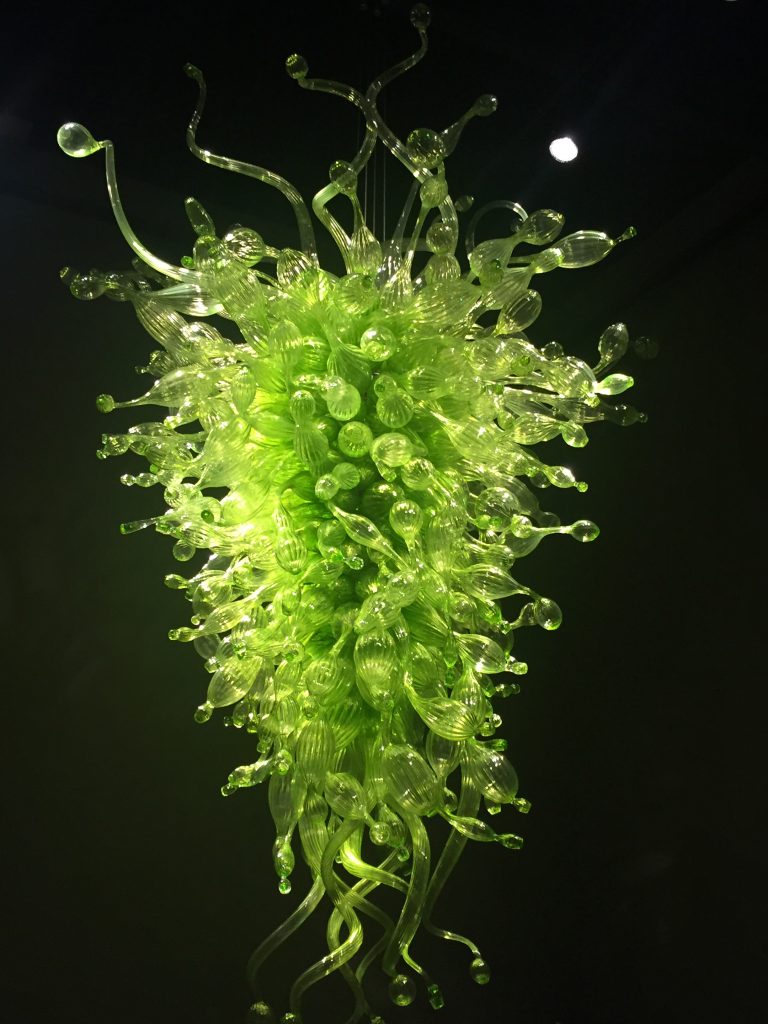 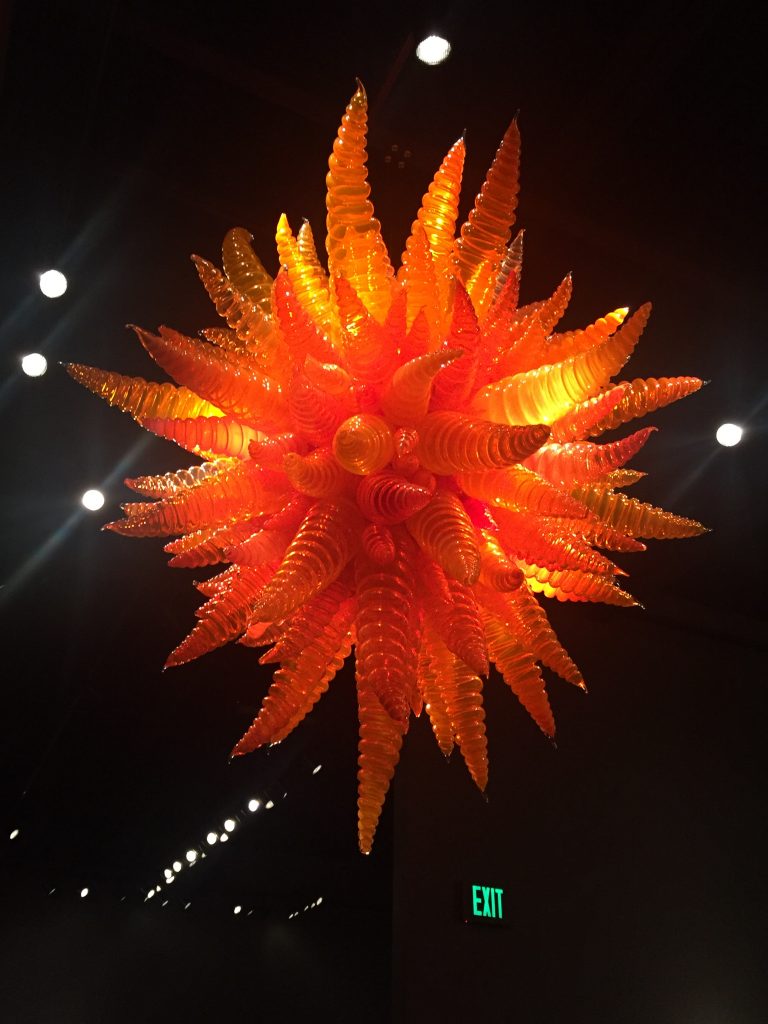 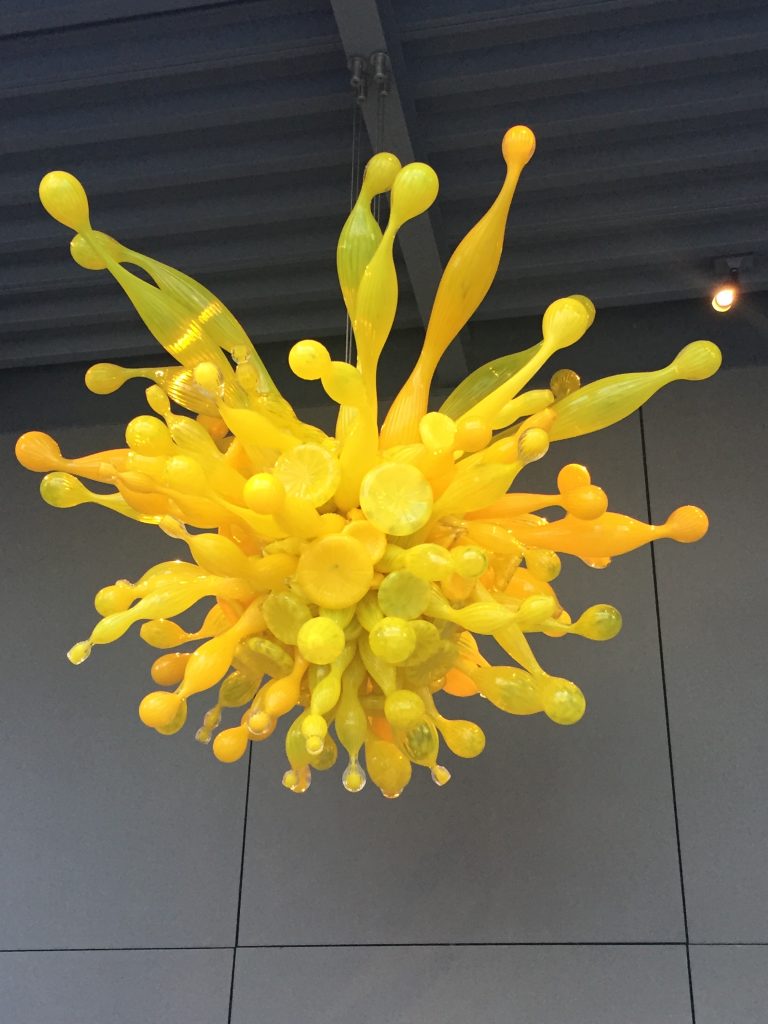 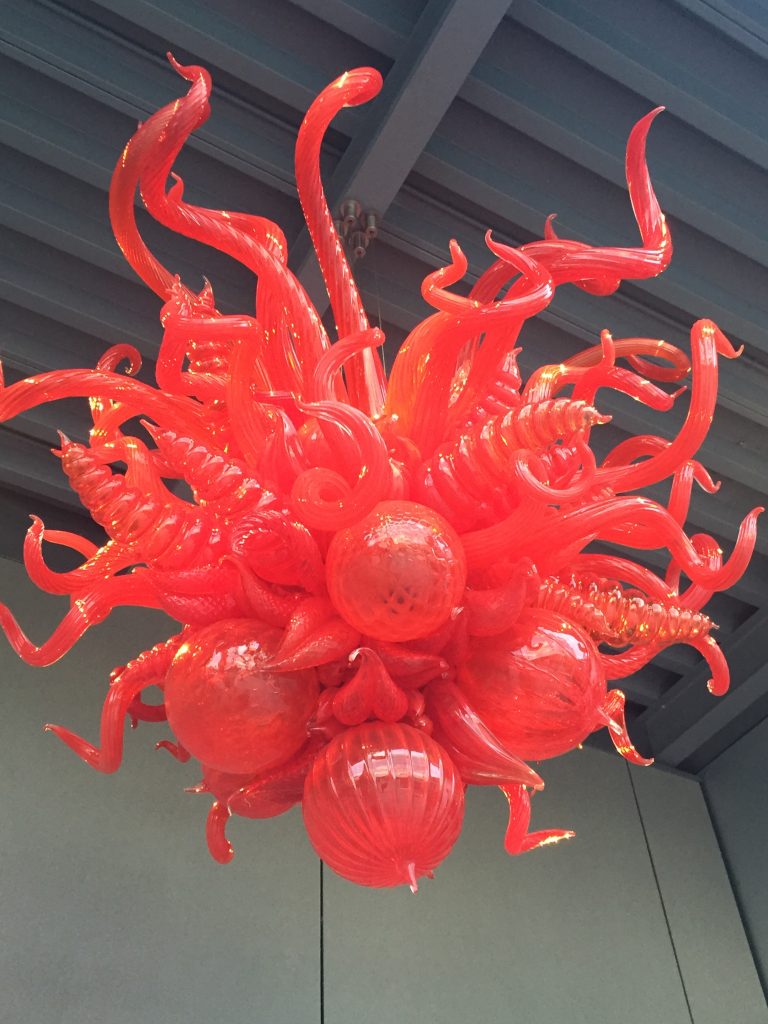 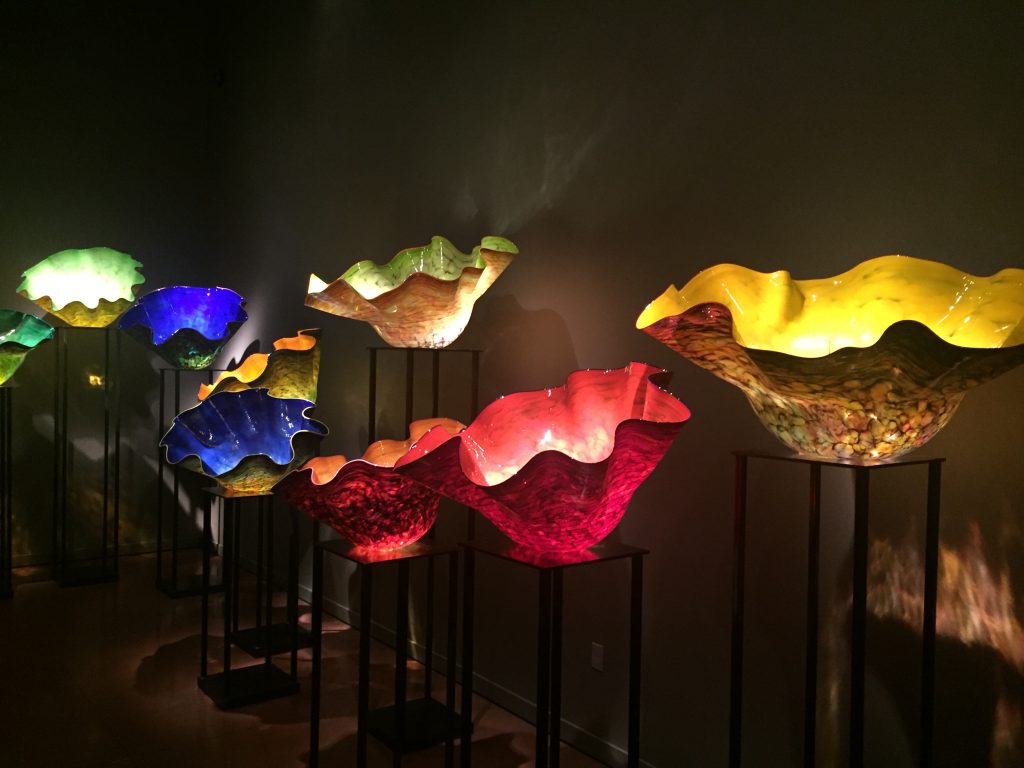 The Theater…. (I have no pictures of this) 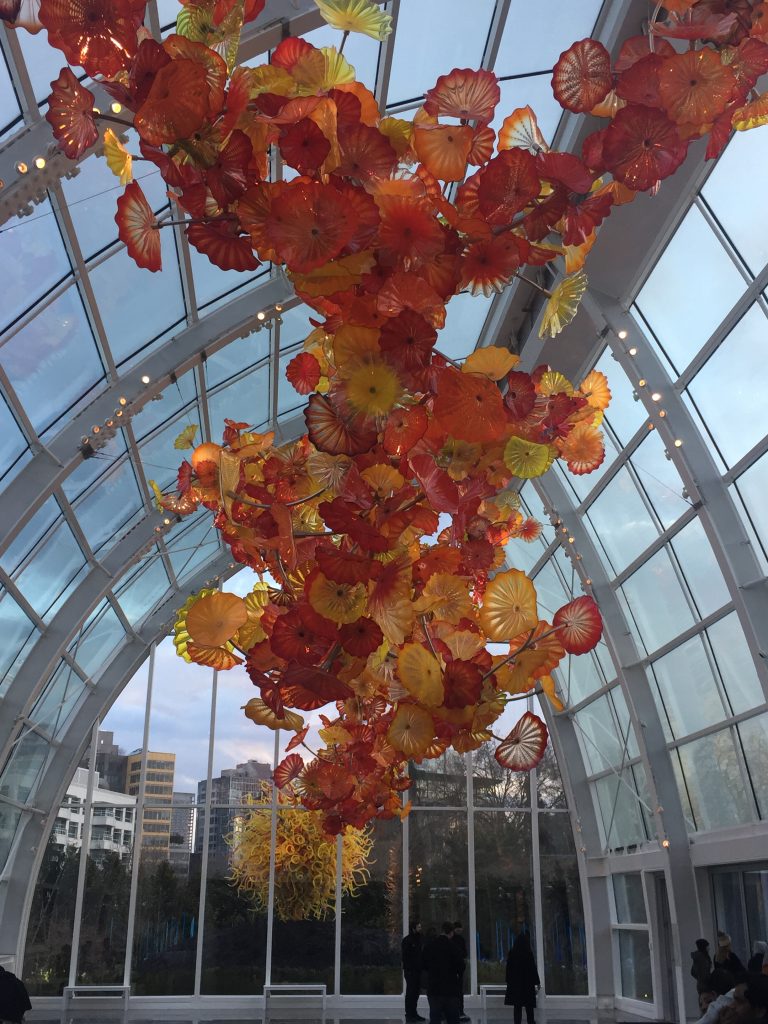 And finally, the Garden…. 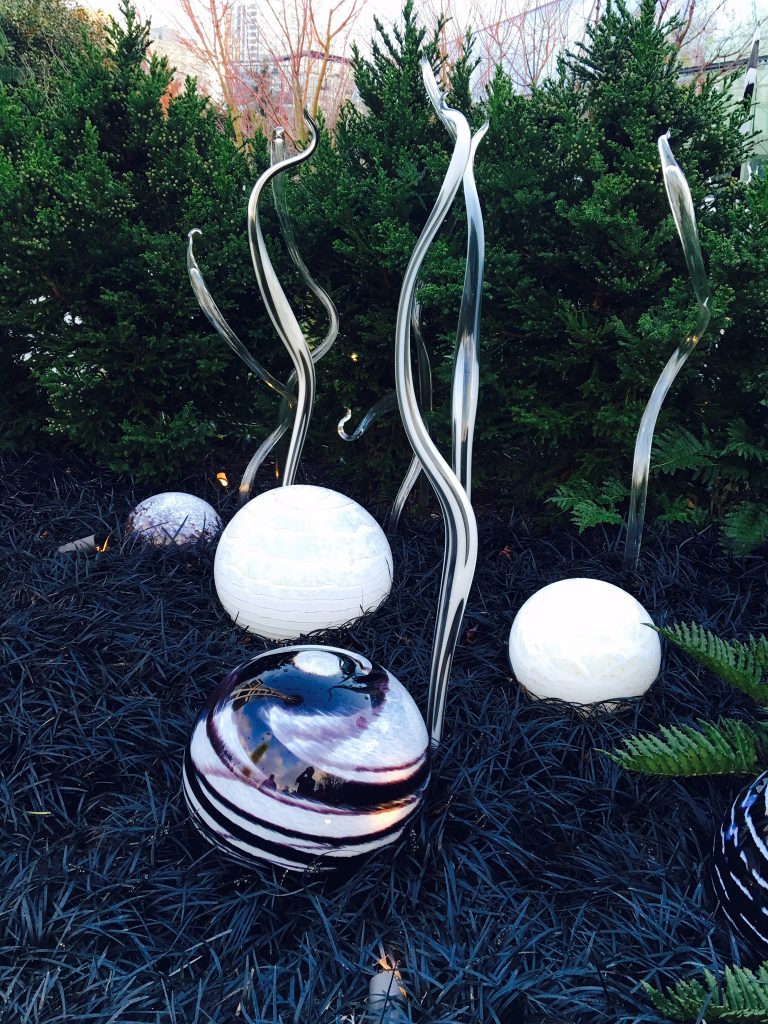 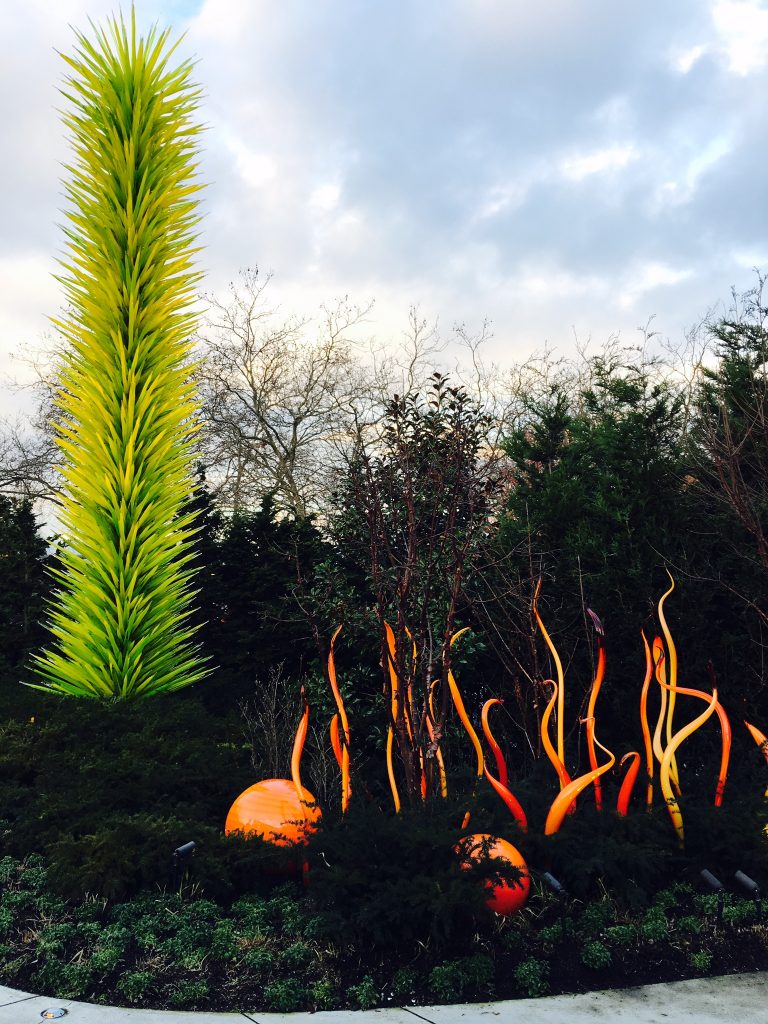 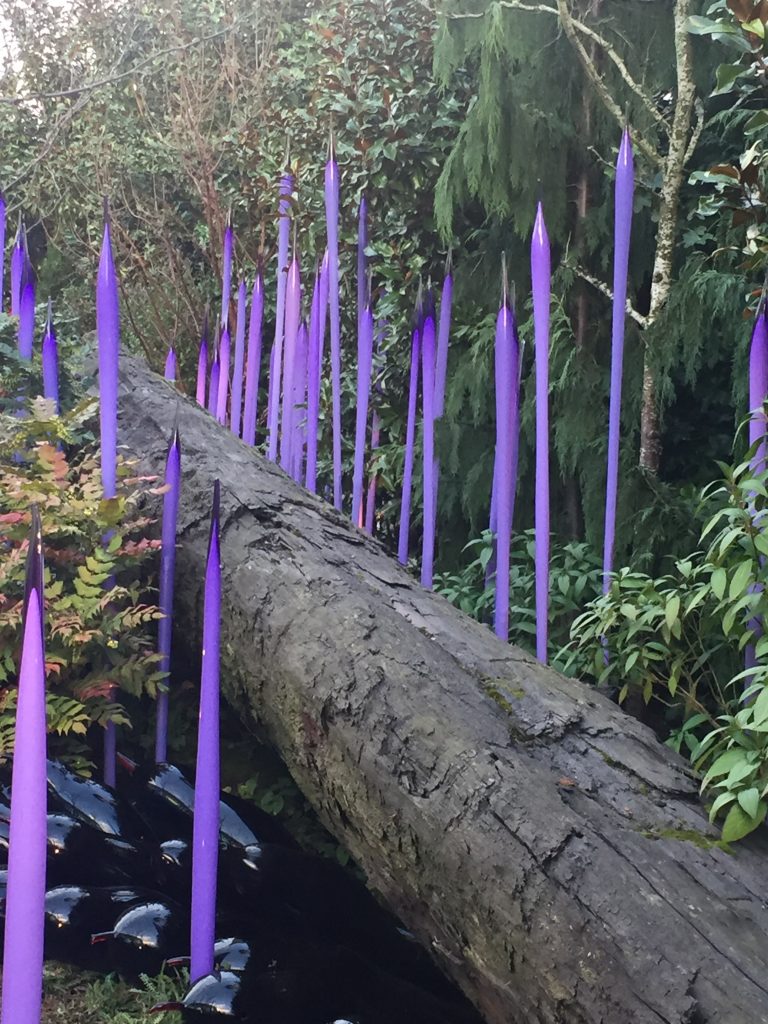 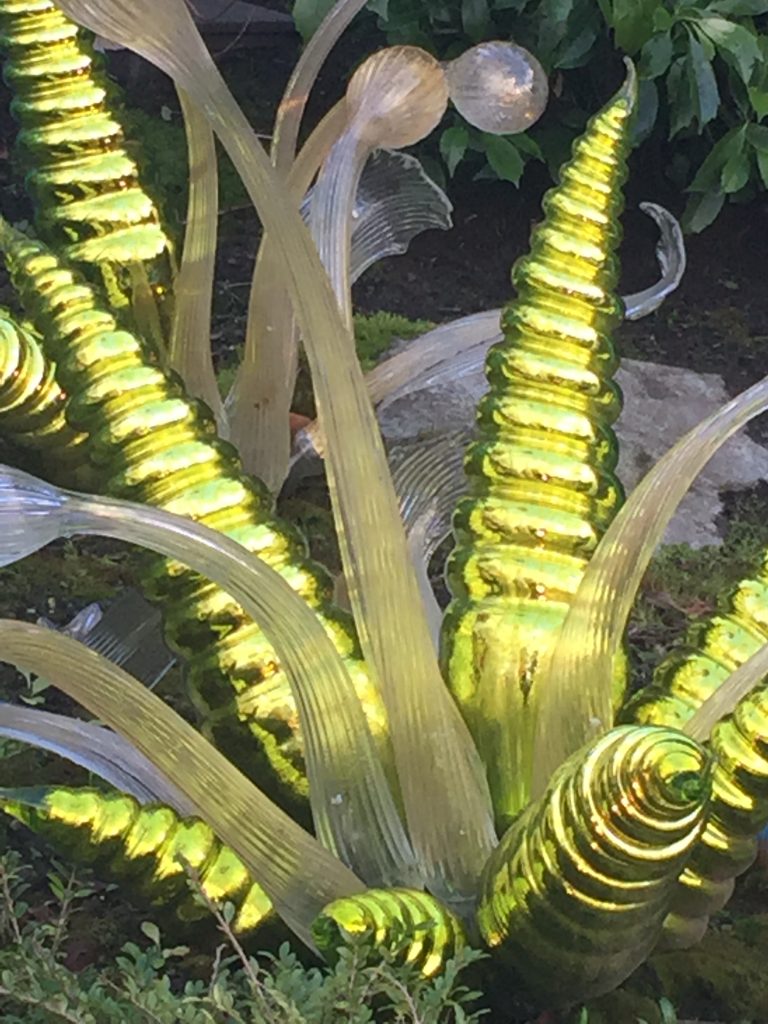 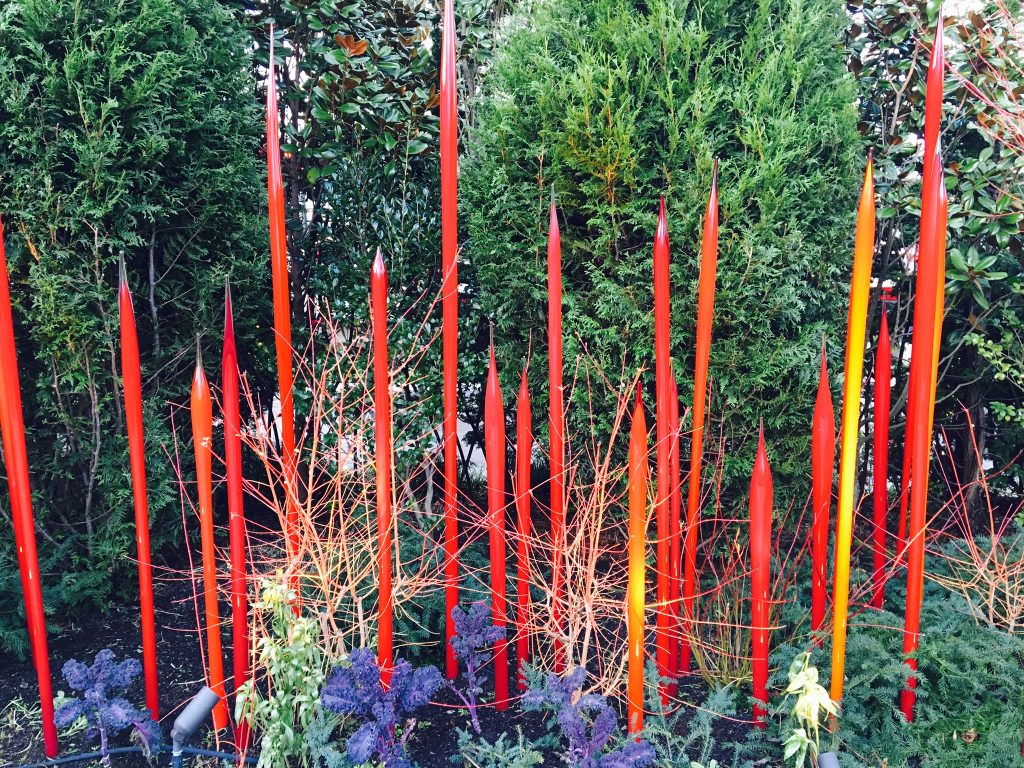 The Chihuly Glass and Garden Gallery is such an inspiring and enchanting place to visit and explore. These pictures tell it like it is but YOU really should see it up close and personal for yourself.

If YOU happen to be coming to Seattle for three or four days this April, and YOU haven’t been to this Gallery before, it would be worth it for YOU to make the time to see it for yourself.

When I was inside wandering around the museum and taking it all in, it felt like Spring to me, even though it was a cold,  December day outside.

I’m always talking about living in the present but at this time I’m eager to turn the corner and say hello to April and all that springs forth in the coming months.

(That’s the sound I make when I’m happy about something!)