First Time to Zurich, Switzerland, But Not The Last 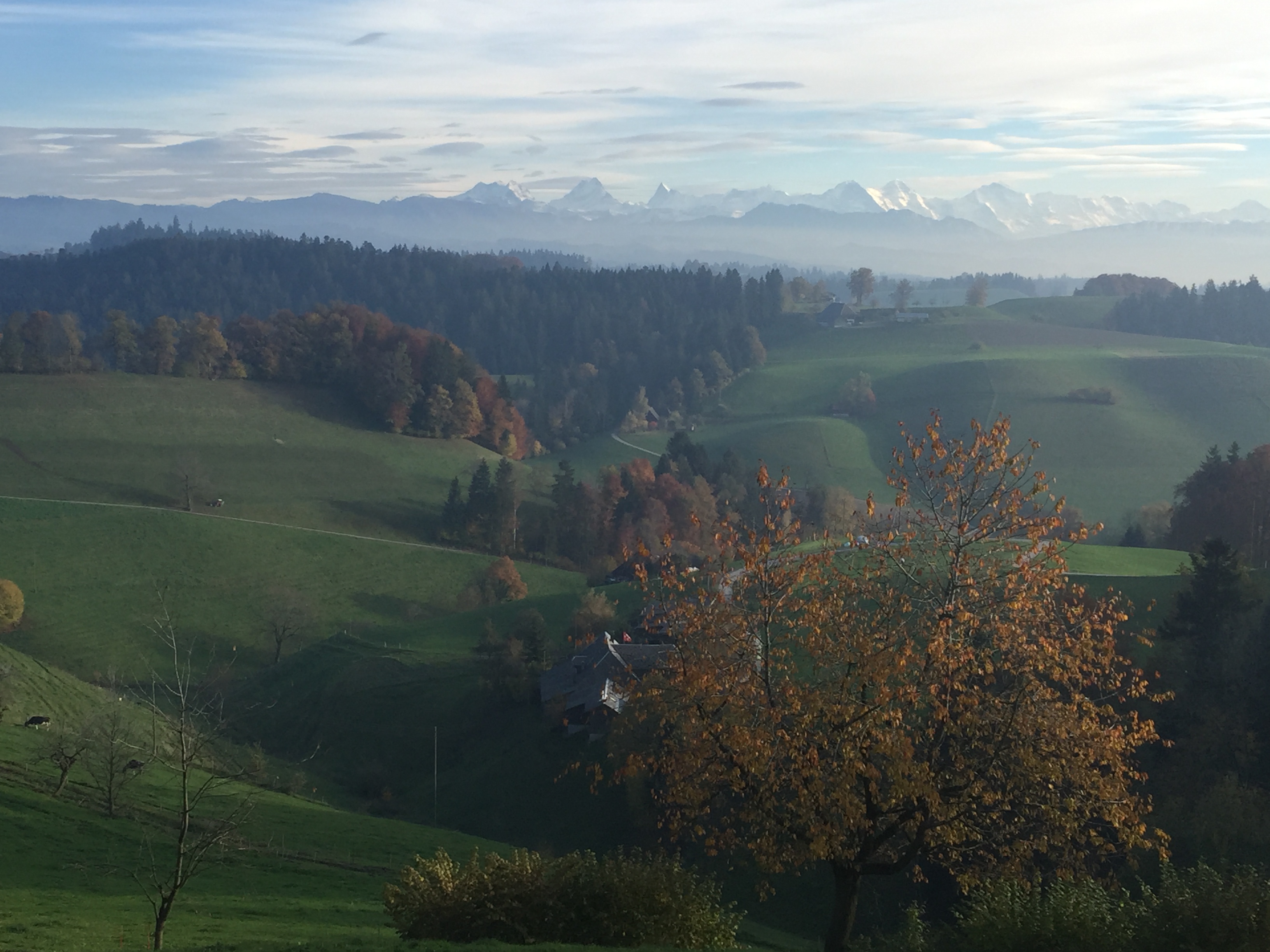 One week is just not enough to see Switzerland.

Although my time there was spent well, I just barely scratched the surface in experiencing  what the the country has to offer.

One week wasn’t even enough to see and feel the heart of Zurich, let alone the whole country.

But I’m grateful that I had that one week:

The friendliness I encountered from people from all walks of life. 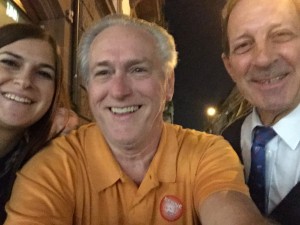 Verena and Andy, co-conspirators in the “Bern tour Yodel-oke” incident. 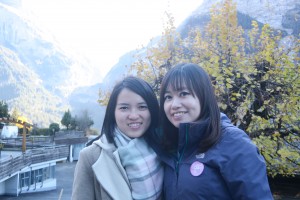 My “Video Production Crew” and tour buddies in Grindelwald and Interlaken 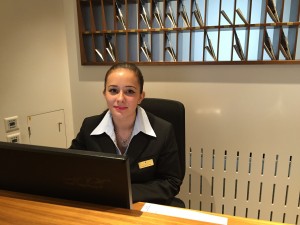 Came in out of the chilly gray day and found the “Sunshine” had been sitting here behind the desk all along. This is Catharina. 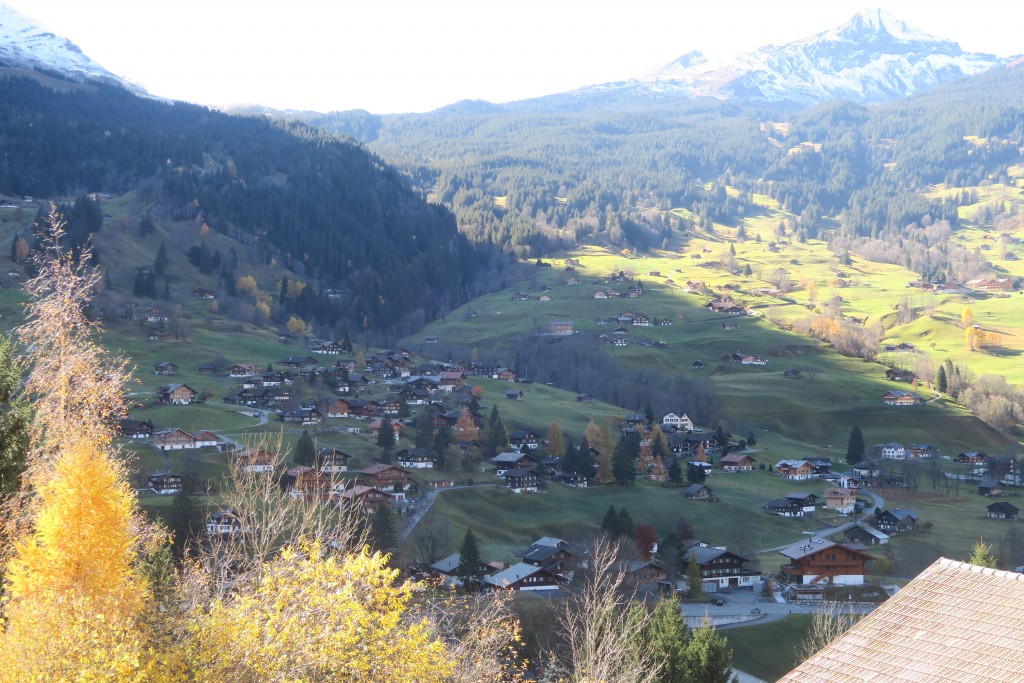 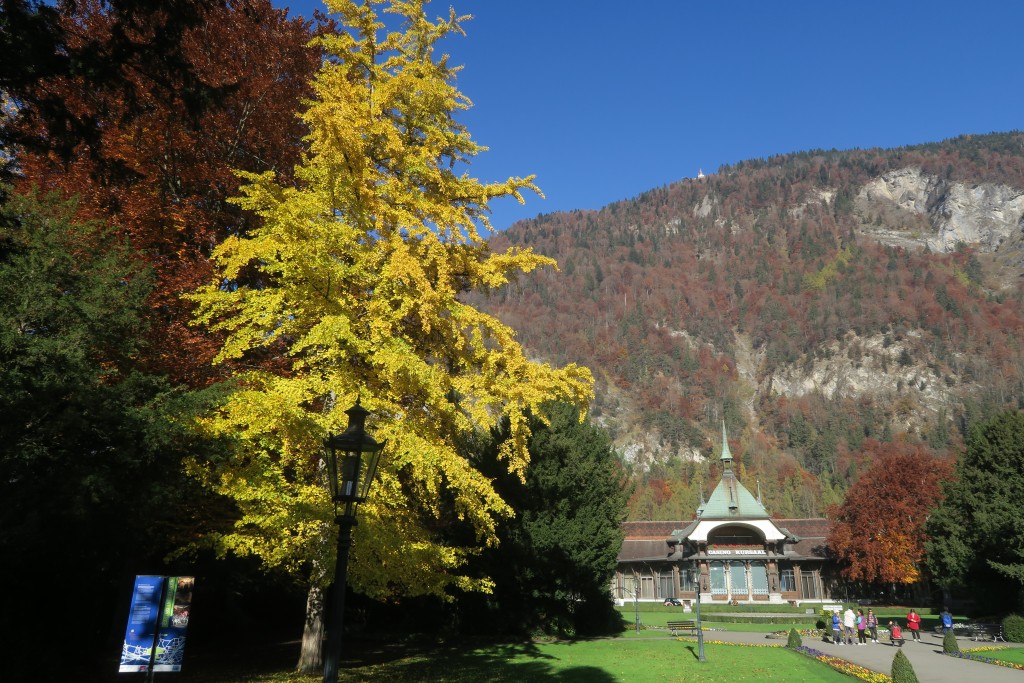 The sound of the cowbells around the necks of the animals grazing in the grass in beautiful meadows and up along the hills too.

The multi-lingual conversations I could hear as I walked down the streets of Zurich.

The weather (a little chilly and gray most of the day but with an occasional sun break) was very similar to the weather I left behind in Seattle. Most of the time I wore shorts and a shirt because I’m used to the chilliness. But everyone else was wearing coats and boots as if winter had already arrived.

The hustle and bustle of all the travelers going to and from the Zurich train station. I was told that a train pulls in or goes out every three seconds. That means 3,000 trains leave and arrive every day at that station.

The magnificent aroma of delicious foods coming from somewhere as you walk around the town.

The plethora of musical, cultural, and outdoor activities.

I could go on and on. That’s just the tip of the iceberg. 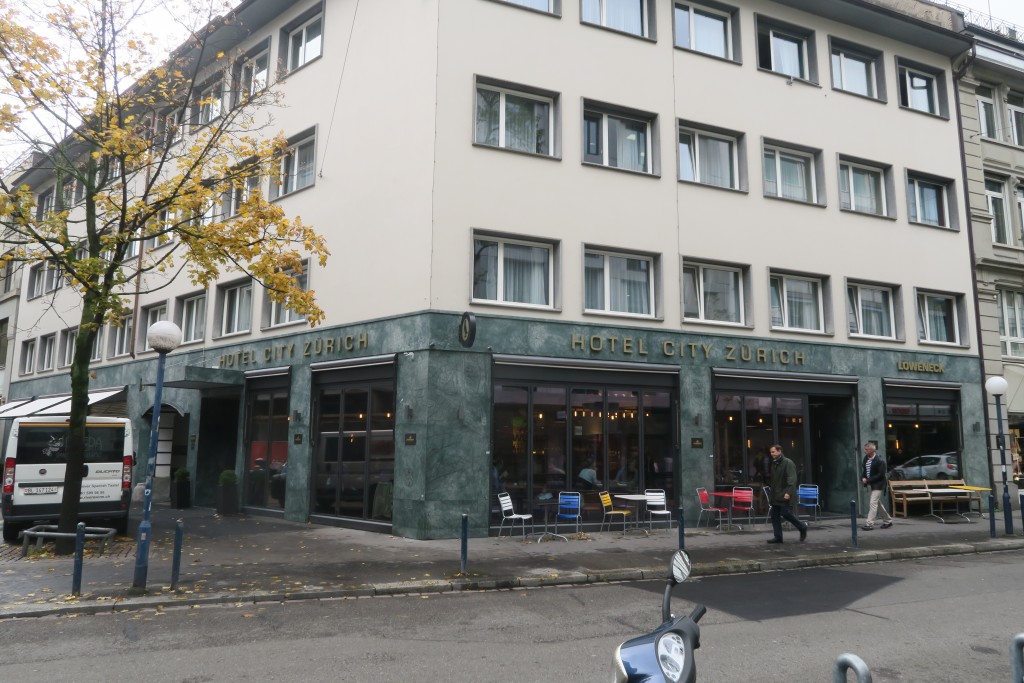 My hotel was convenient to everything

I stayed in Hotel City Zurich, in the old part of town. I didn’t know anything about it before I made the reservation. I picked it because it was just two blocks away from the Gessnerallee Theater and the ZKB Club, where Lizz Wright and Lisa Simone, respectively, were scheduled to appear.

But it also turned out to be a five-minute walk from the train station, where I caught the train to Uetliberg,  and the meetup place to catch the tour buses that took me to Bern, Lucerne, Grindelwald, Engelberg,  and Interlaken.

And it was only about 23 blocks away from the hotel to Backeranlage Park, where I played basketball outside a couple times, in between tours. 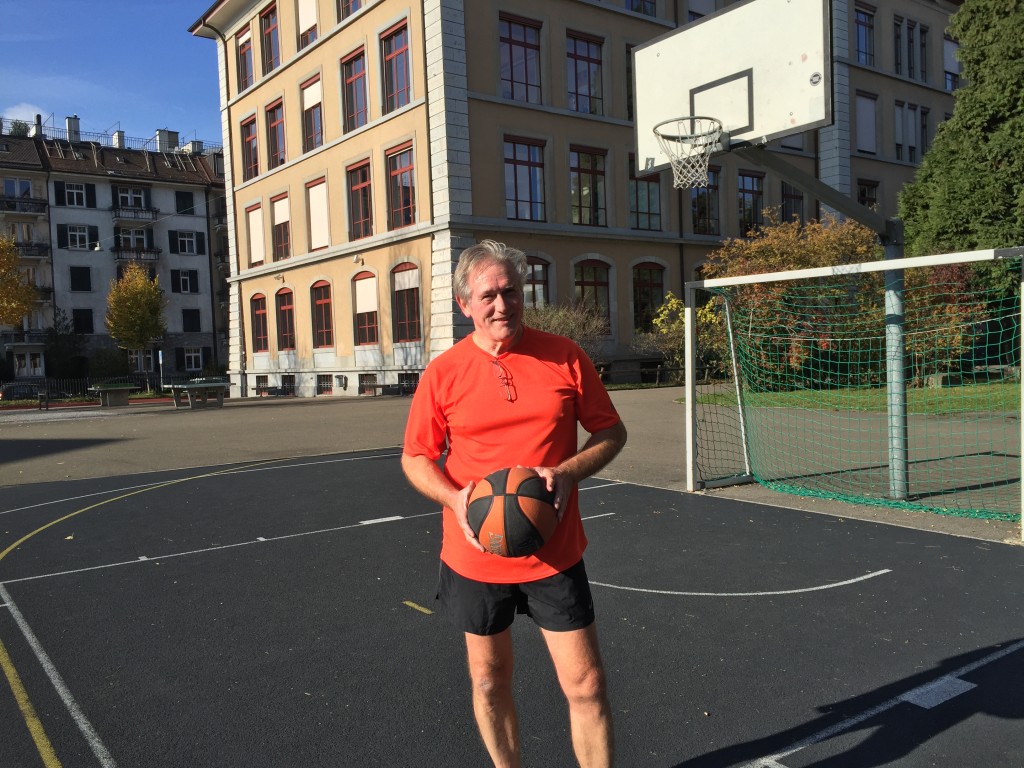 I would like to say hello to all the Hotel Staff and The Hotel Restaurant Staff who helped make my stay in Zurich a very memorable one. I failed to get photos of all the Staff, so I’ll just give a BIG SHOUT OUT to CATHARINA, ANNE, CLAUDIA, SANJA, SUSANNE,  FLAVIA, SARAH, AND JANETTE.

I’m so glad I met all of them and I appreciate the conversations and laughter, and the care and concern they all showed me. THANKS GUYS !!

The JazzNoJazz Festival is an annual event in Zurich.

Lizz Wright, my FSF (Favorite Singer Forever), was going to  sing there on Thursday evening at the Gessnerallee Theater.

The theater was just two blocks away from my hotel. I’d cross the street, walk one block, turn right and walk through an alley, across a bridge over a beautiful river walk and into the back entrance of the theater. 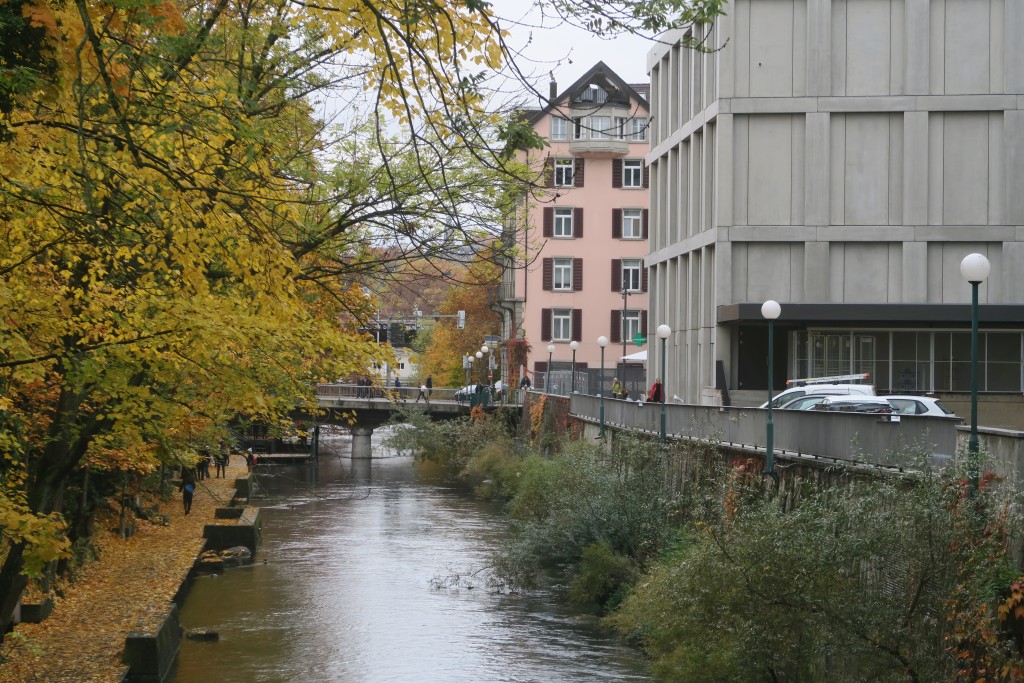 River canal running between my hotel and the Gessnerallee Theater

The gray concrete building to the right was a Migros Store. Migros is the largest privately owned company in Switzerland. It’s 19 years old and it has 97,000 employees.

It was convenient being right across the street from it. It had everything I needed: ranging from bandaids to tennis shoes to fresh fruit and vegetables, great breads, wine and cheese, etc.

Sometimes I would scoop up a few things and go down to the riverwalk and have lunch on the bench by the water.

There was also an organic food store nearby too.

So, Over The River And Through The Woods To The Lizz Wright Show We Go 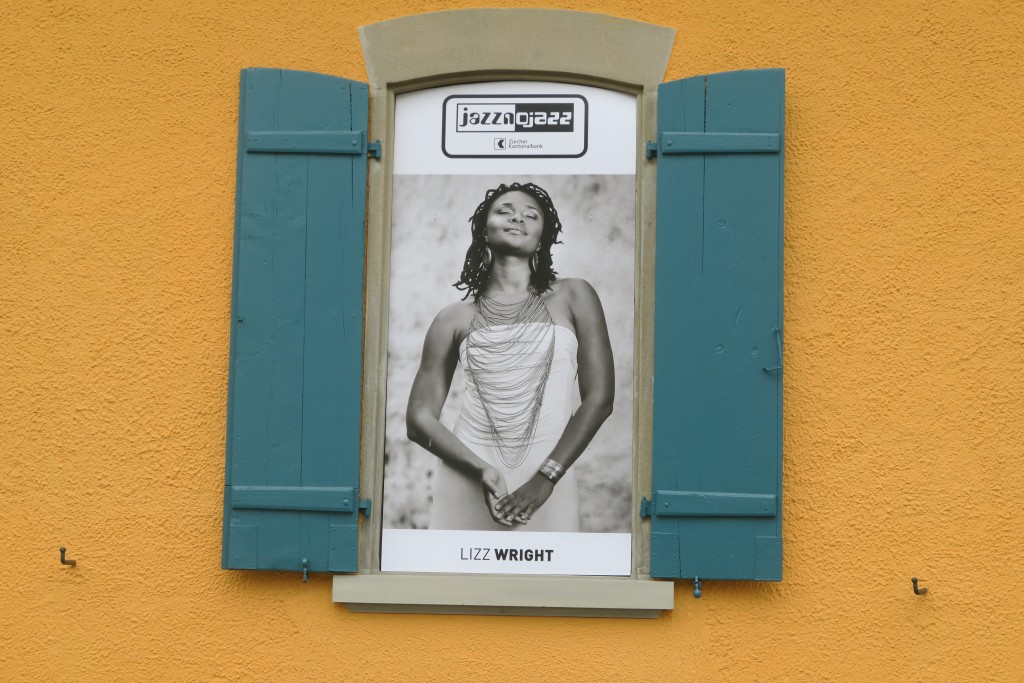 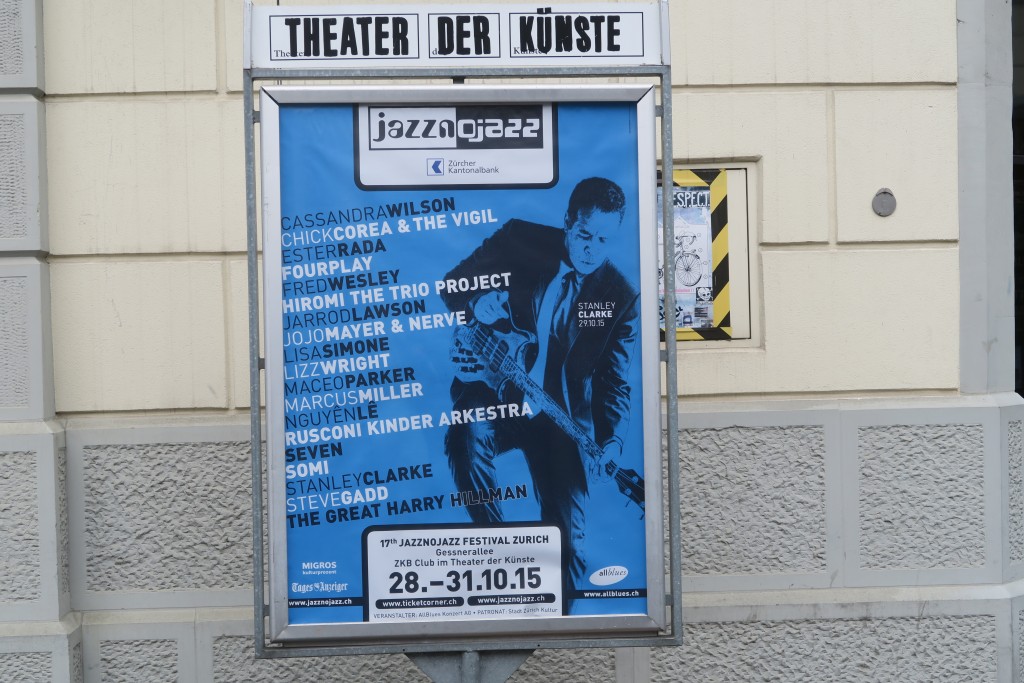 Billboard of all the artists performing in the JazzNoJazz Festival

There are a lot of talented artists performing in the festival. If you would like to see the billboard better, just click once on the photo. 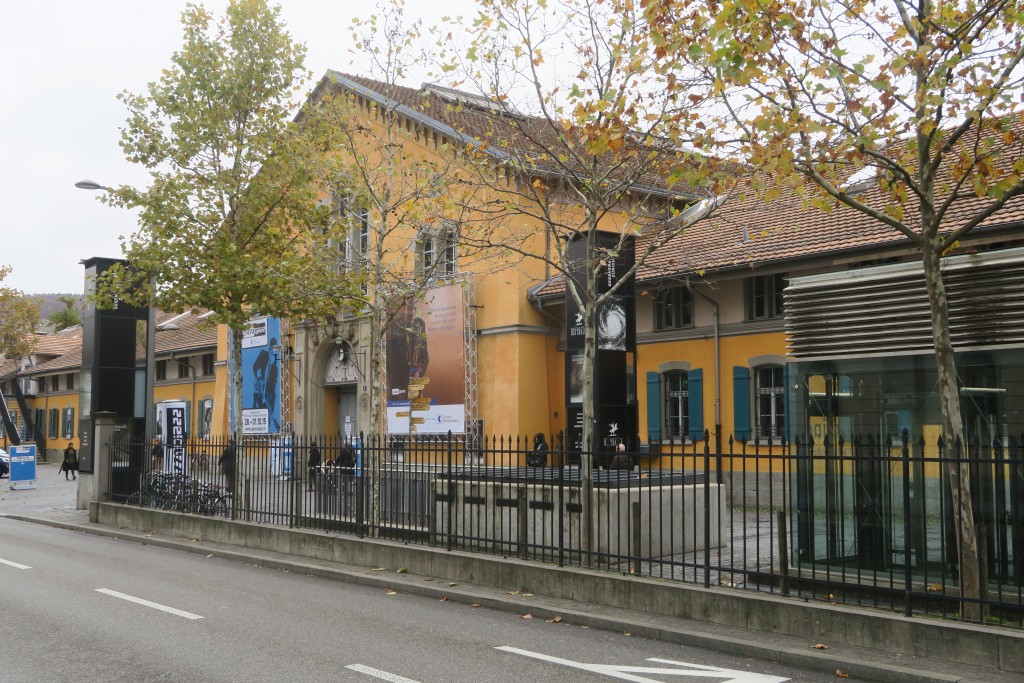 This theater has been renovated. It used to be a stable to house military horses. 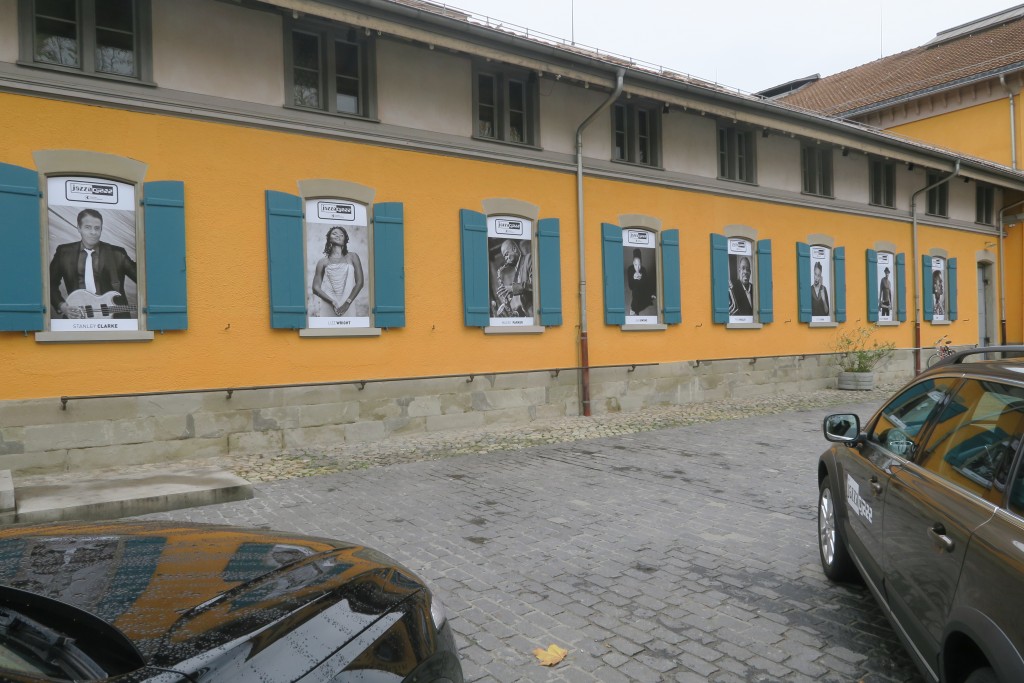 Billboards on the Gessnerallee Theater

I hope you enjoy this.

I love listening to Lizz sing anything acapella.

To me, her voice IS the music. 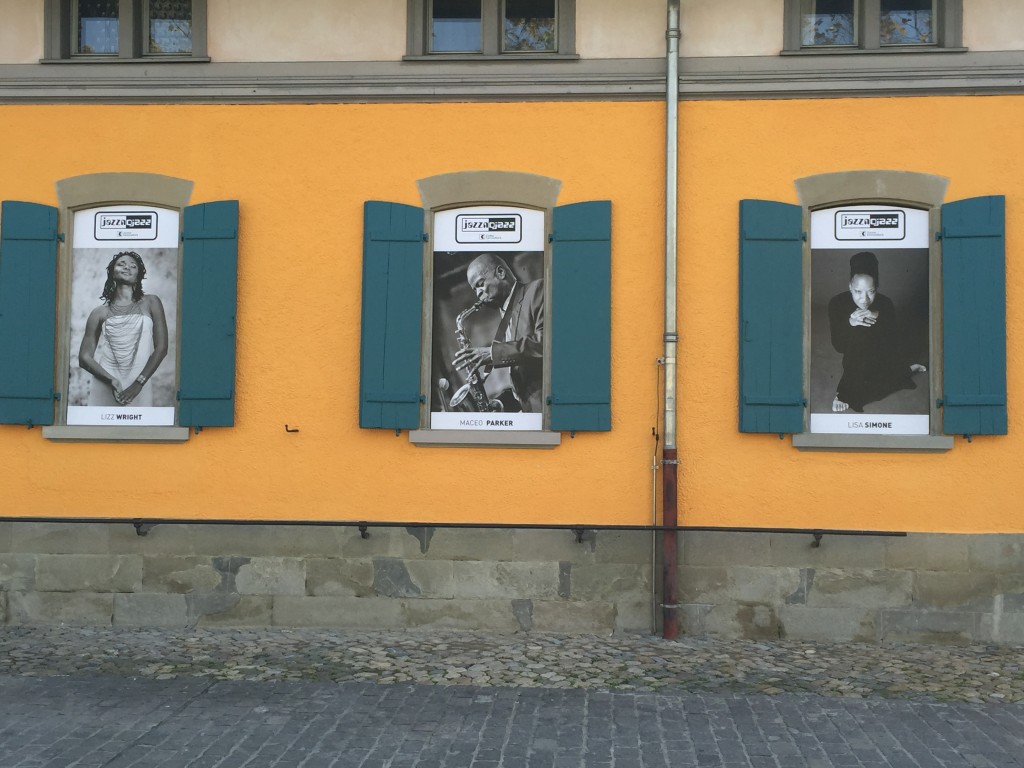 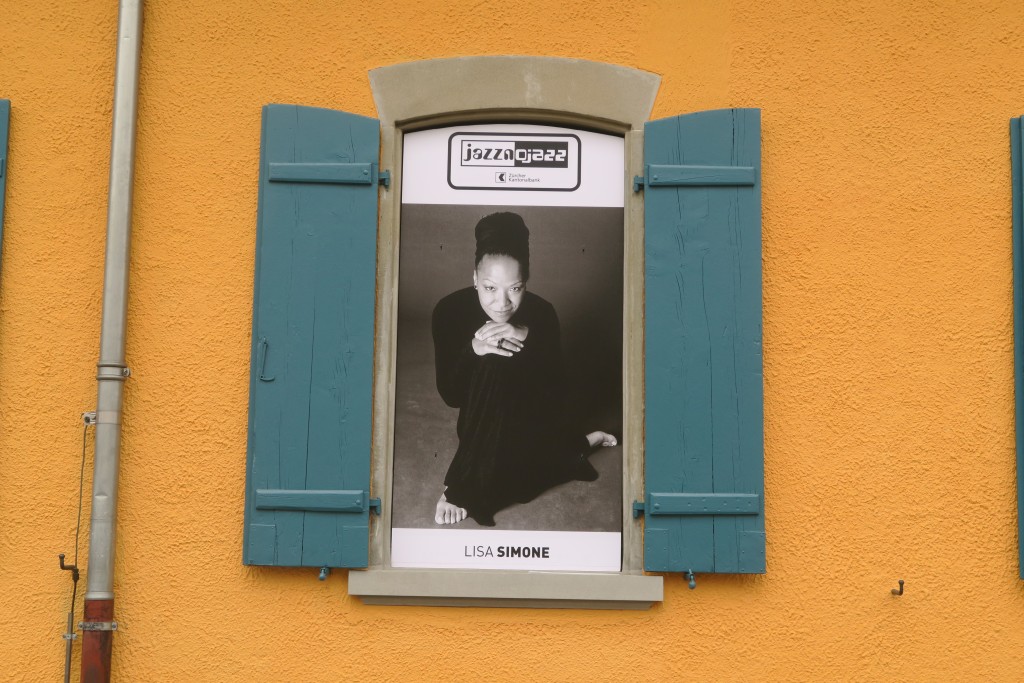 Two days after Lizz sang at the Gessnerallee Theater, Lisa Simone was scheduled to sing in the ZKB Club, just across the street from the theater.

I had never seen her perform live before and I didn’t know very much about her up until a few months ago. But I’m really glad I went to her show. She’s soulful and very personable. I liked her. See what you think.

LISA SIMONE AT THE ZKB CLUB IN ZURICH, SWITZERLAND

Walking Around The City

I intentionally didn’t plan anything on two of the days I was there.

They were my open days, to do anything I wanted to do.

Here are a few things I saw along the way as I walked down the Bahnhofstrasse from my hotel to Lake Zurich: 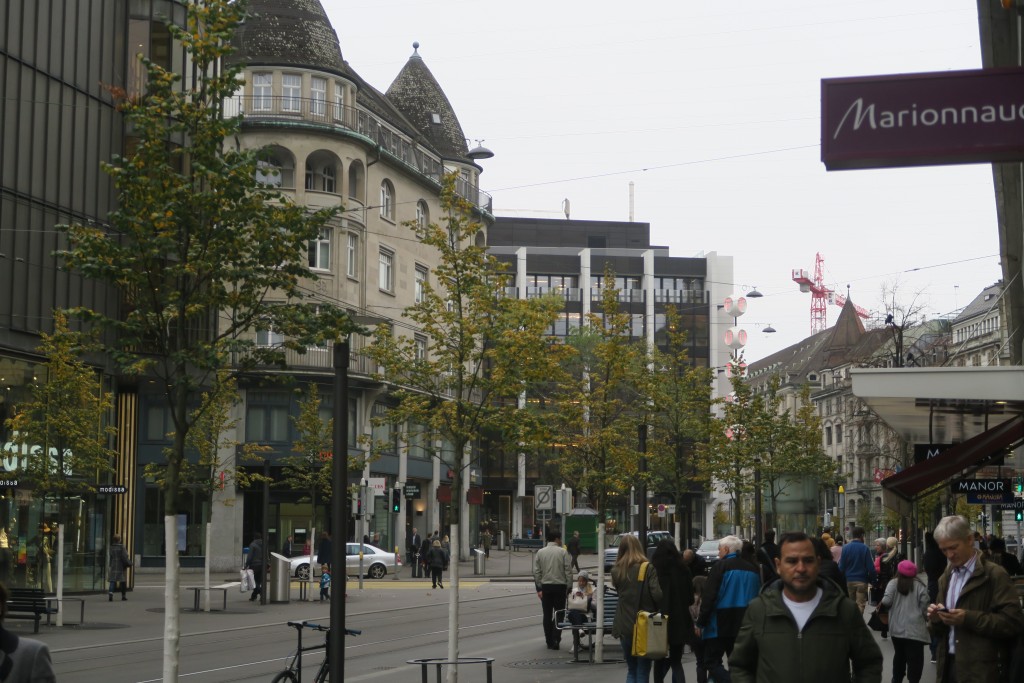 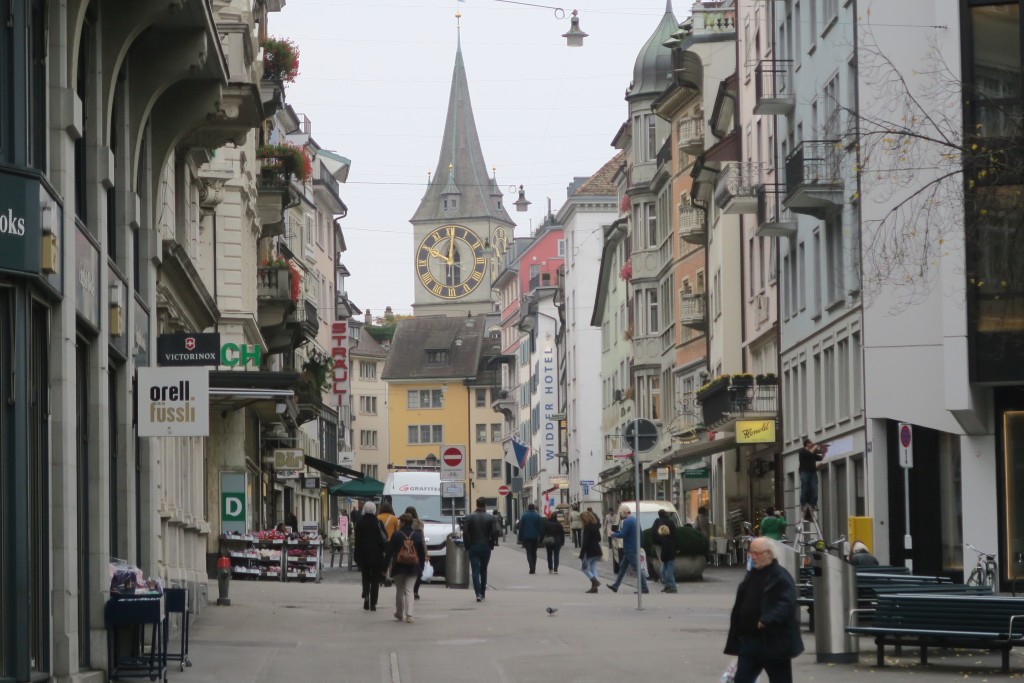 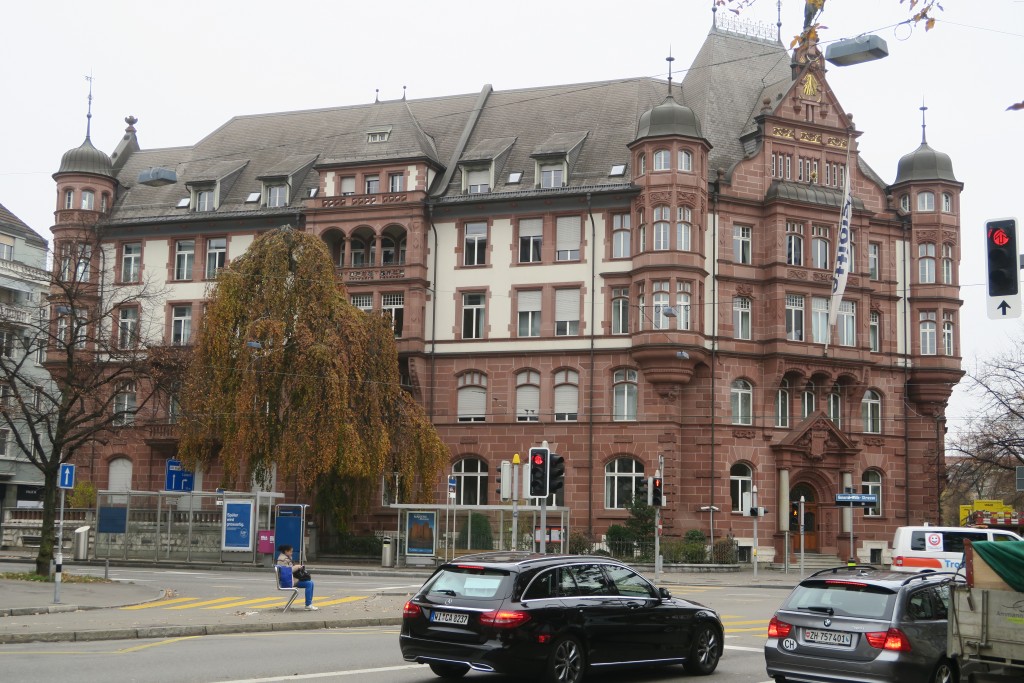 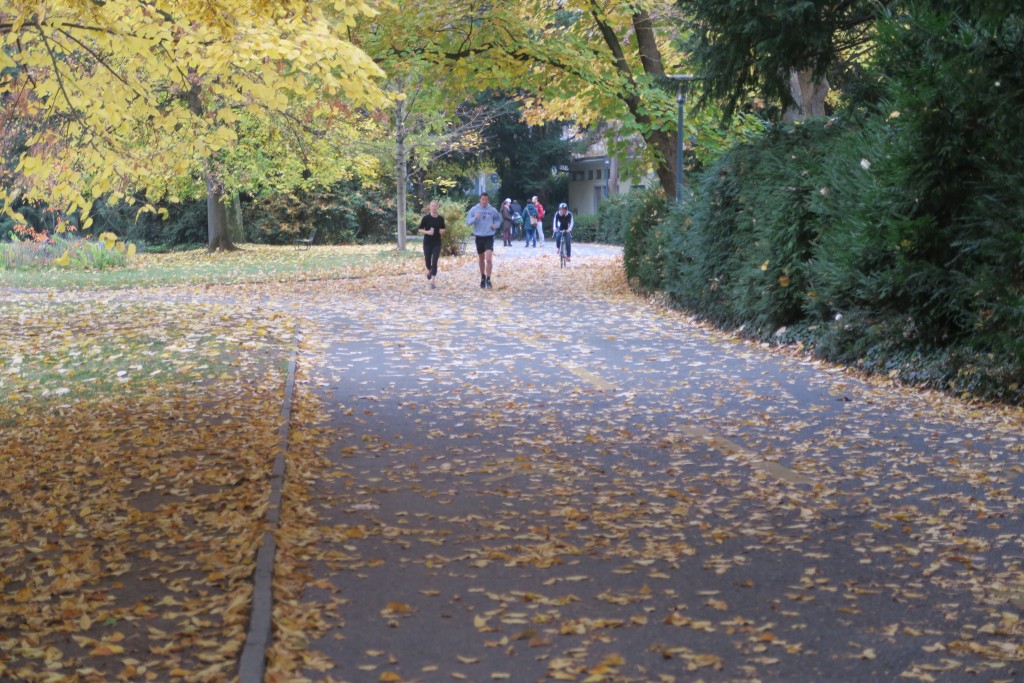 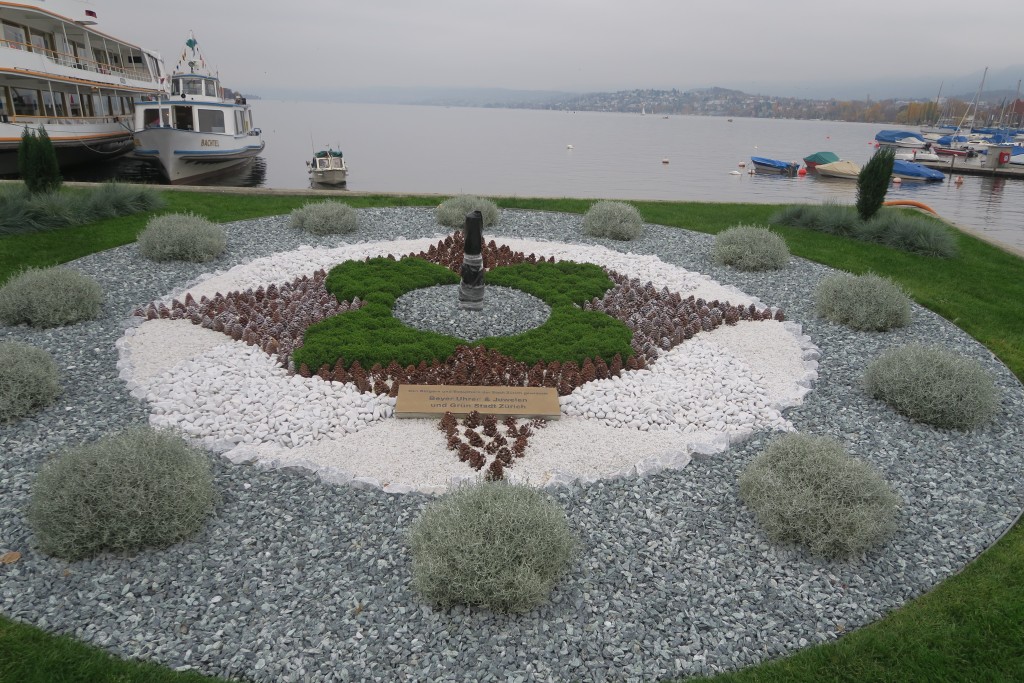 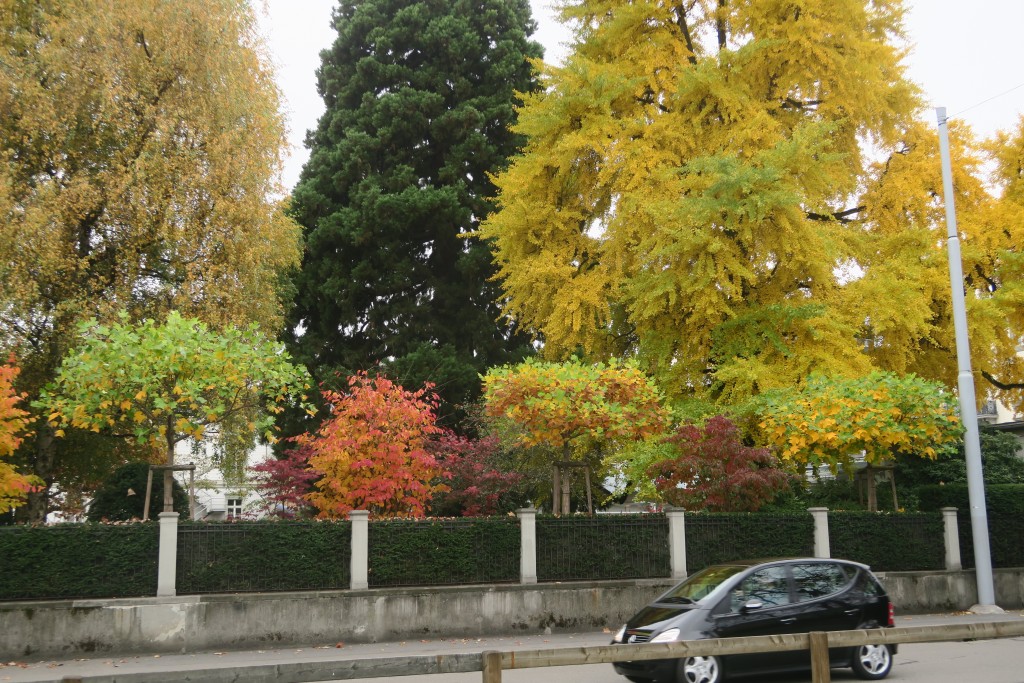 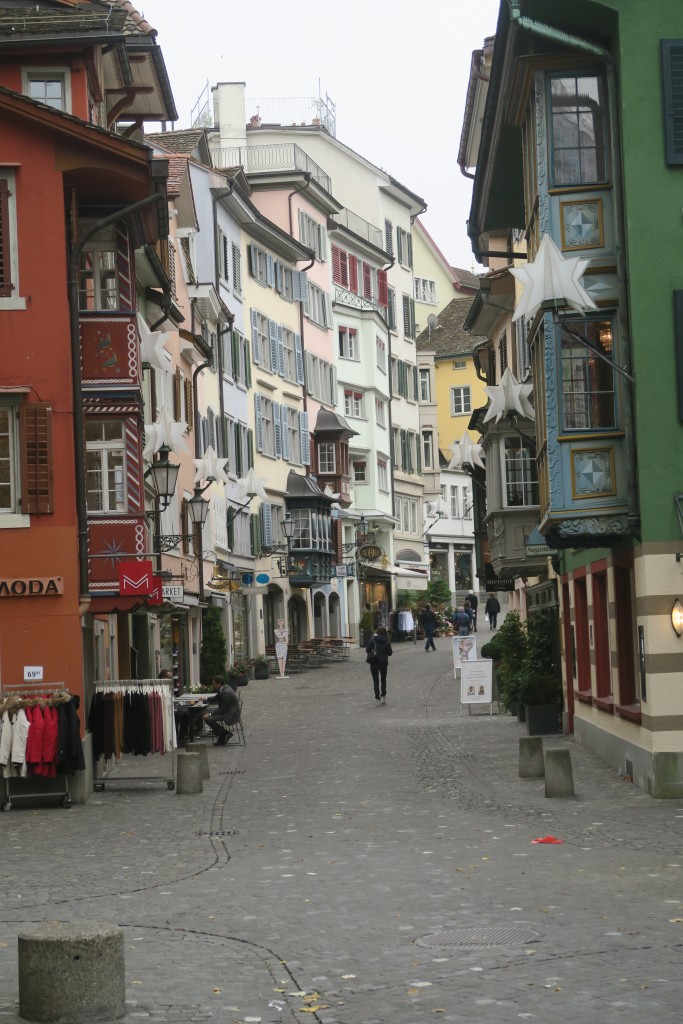 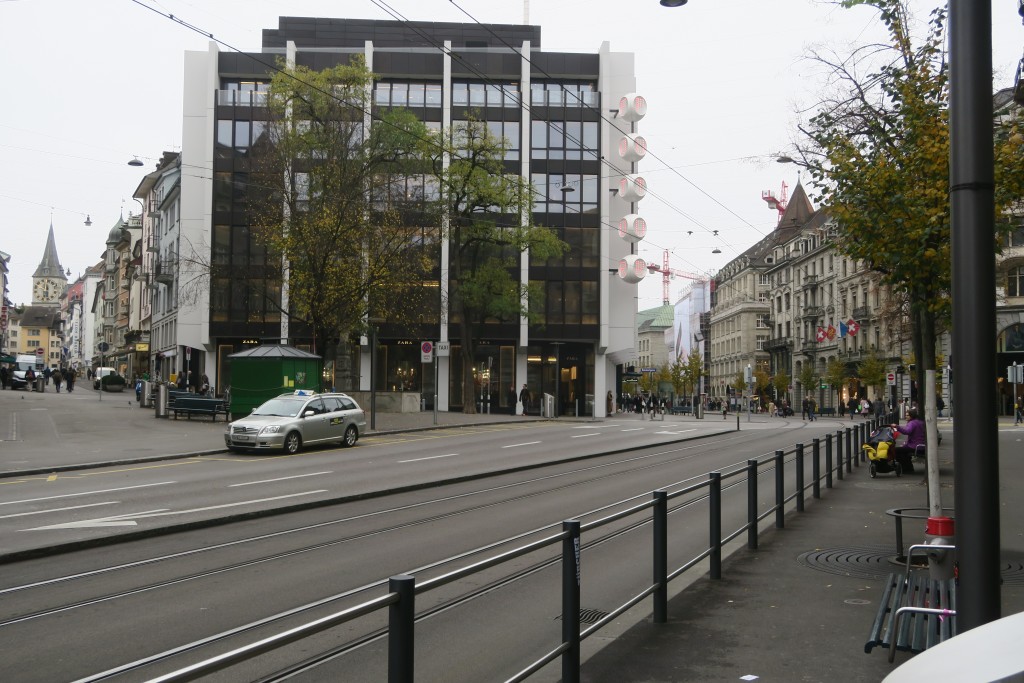 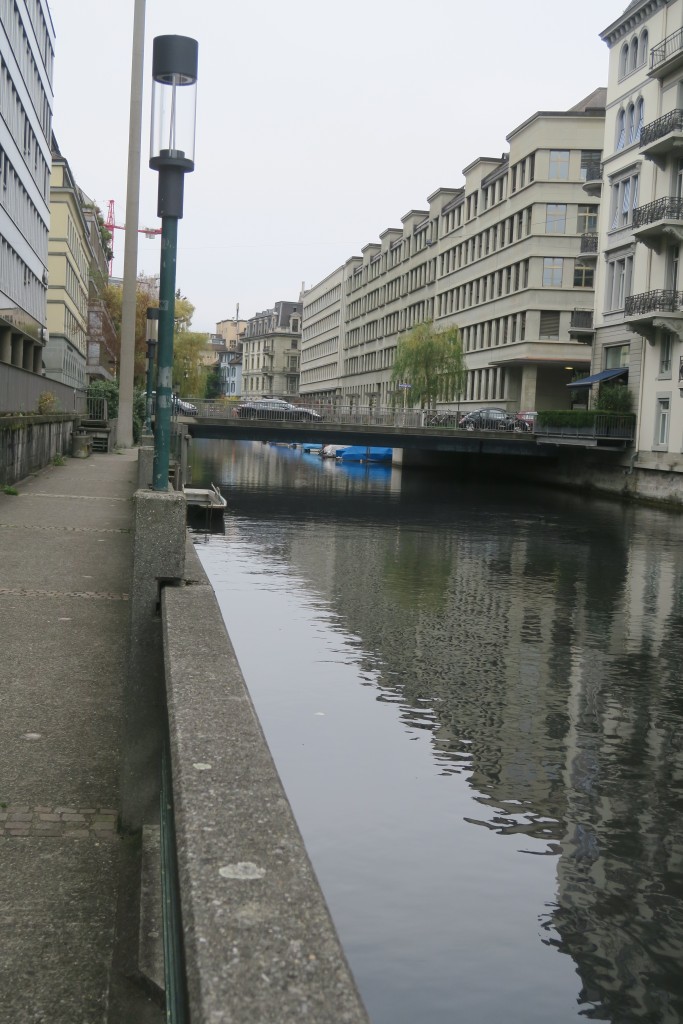 It’s a beautiful city and I feel like I barely saw it. So I will be going back there again. But this was a great first time for me.