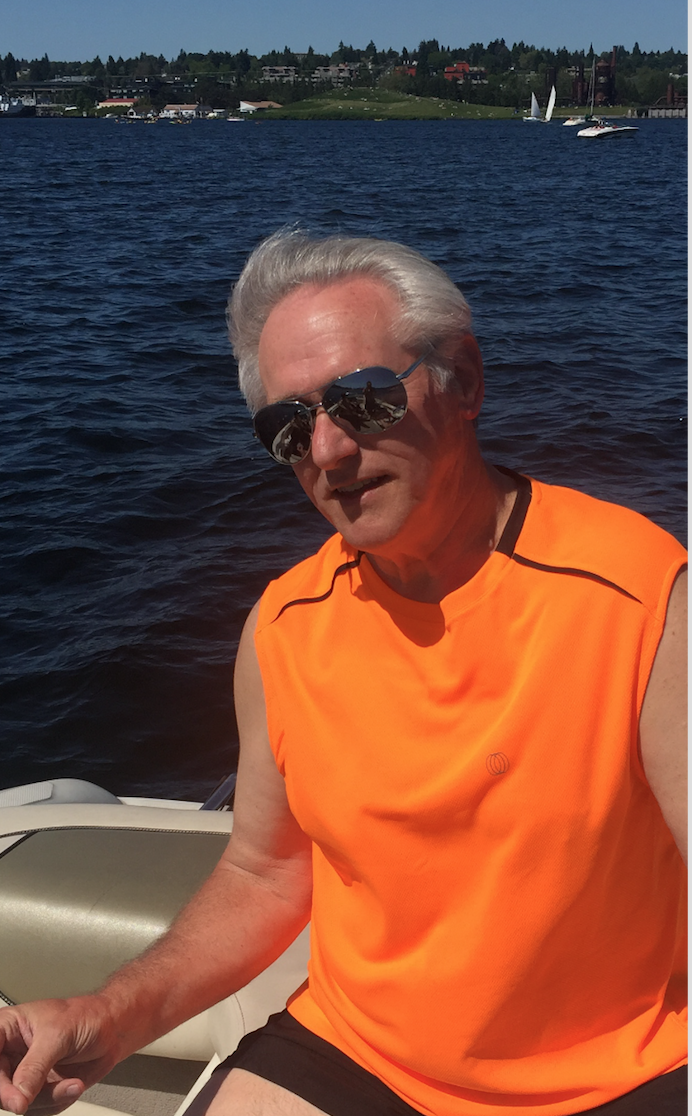 Last night I was on youtube researching some things and the algorithm led me to Dan Fogelberg.

I hadn’t listened to his music for a while even though I have a lot of it in my iTunes library.

He became popular in the 70’s and was known as one of the important leaders of the soft-rock era.

I always did like him and his music. I liked his thoughtfully-crafted verse, his melodies and harmonies, his gentle-natured ballads, and he played some good ole’ rock n’ roll, too.

In addition to his ability to tell good stories through his songs, he played several instruments well. Music was his passion.

He had a good stage presence, a good sense of humor and engaged with the audience well.

The song I happened upon was “Leader of the Band”, a song he wrote about his Father. It’s one of those songs that, when I listen to it, I can’t get through it to the end without tearing up.

Click on the link above, to listen to the song and to hear what he had to say about his Father.

I remember the first time I heard it. I was moved by the sincere love and devotion he felt for his Father, which he revealed so aptly, through the words in the song.

Also I pondered all the possible ways that his Father might have guided, nurtured, loved and taught Dan as he was growing up, to produce such a talented son,  and to emote such a loving tribute from him.

Although I never wrote a song about my Dad, I always knew we (us kids) were loved, and I felt great love for my Dad.

In turn, I made a great effort to let my boys know they were loved.

Two out of three of my boys have become fathers since then. And I am so proud of the way they love their kids (my grandkids). I think the one son, who has yet to become a father, will also be a good father some day, because he’s a caring and loving Uncle to little Evie, my granddaughter.

But I also am proud of my three daughter-in-laws for all the nurturing, teaching, listening, and  patience they shower on the kids (their….” gentle means of sculpting souls….”, as Dan Fogelberg puts it in one line of his song.)

So revisiting Dan’s song made me think of how good parenting makes good kids, and good kids, then, become good parents. And the cycle continues. Of course, parents never get it totally right but they do the best they can at the time.

I enjoy spending time with my kids on Father’s Day. But I also spend time with them whenever and wherever they want to include me in something else they are doing.

This past Father’s Day we changed it up a little bit. They took me to a Ramyon restaurant, named Jinya, a restaurant that takes Ramyon to a whole ‘nother level (as they say). 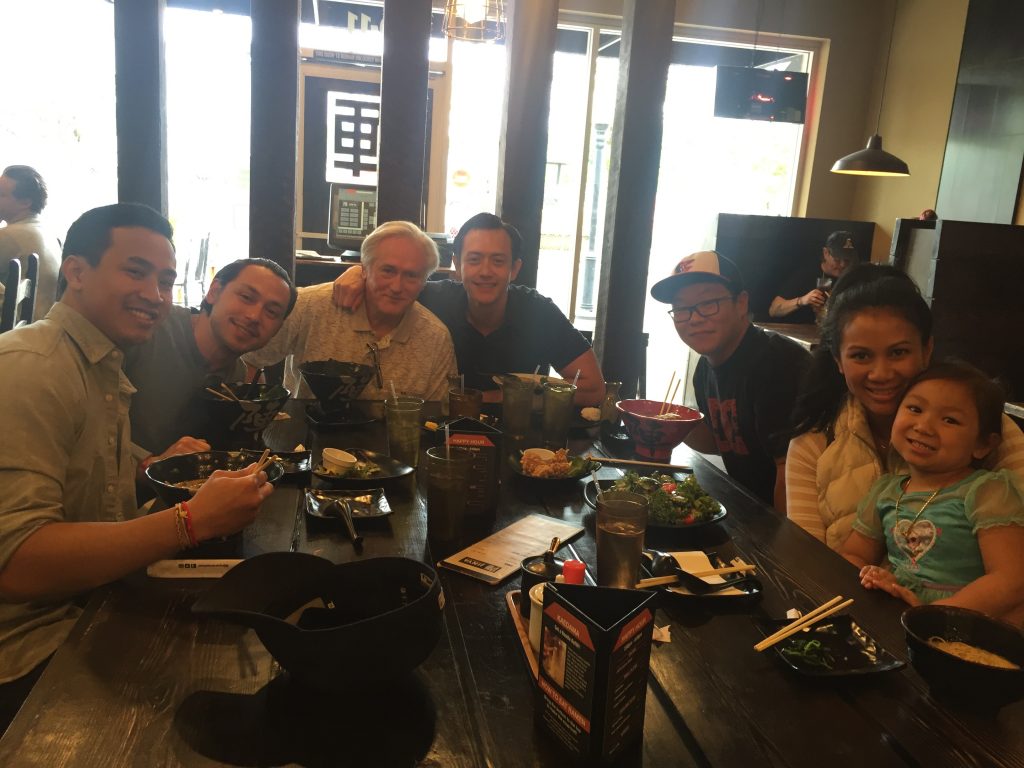 Then on another day, with a little bit different crew, we did what I call Part 2 of Father’s Day. We went boating on Lake Union  (next photo). Their were two fathers. Tim and I. 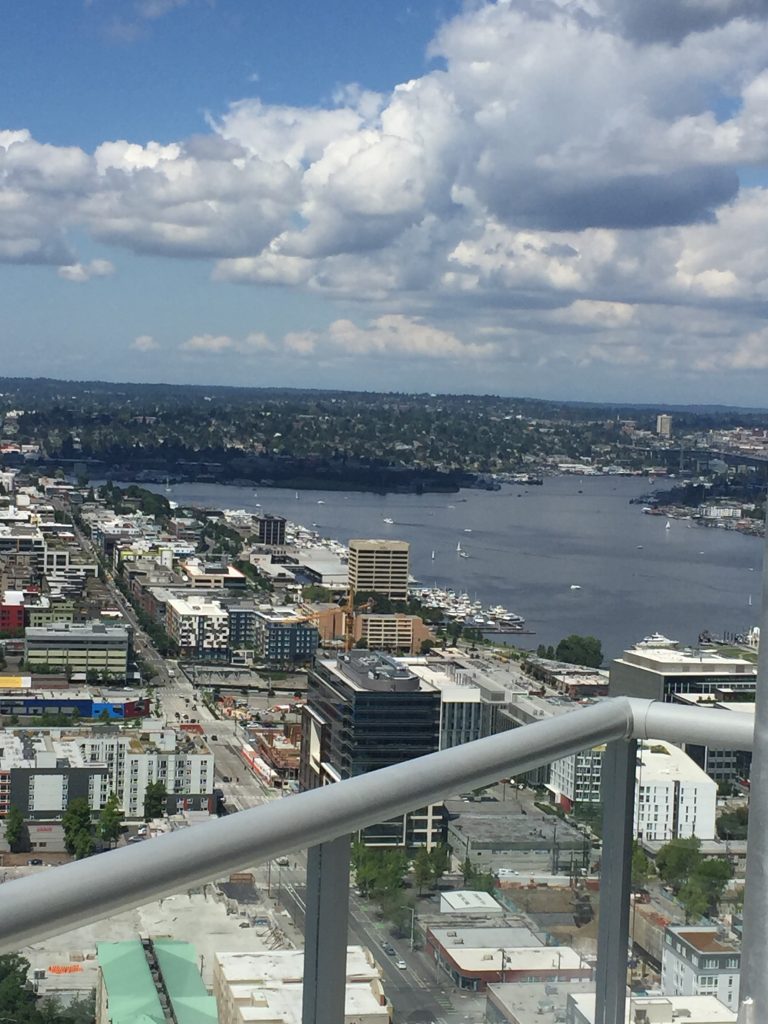 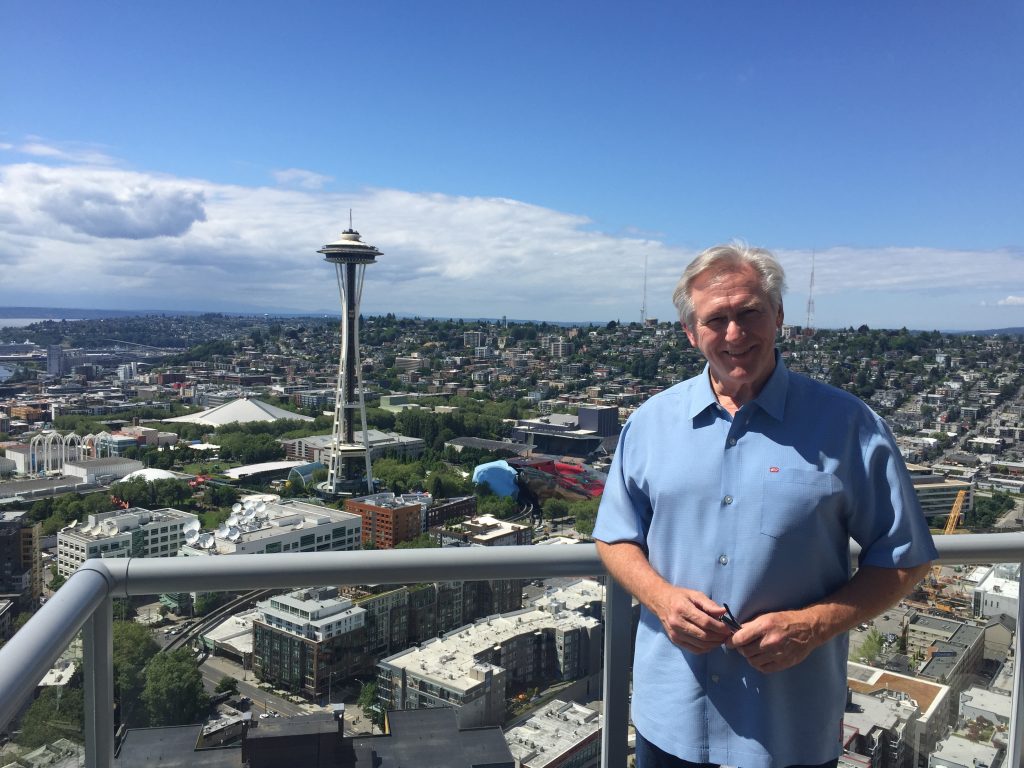 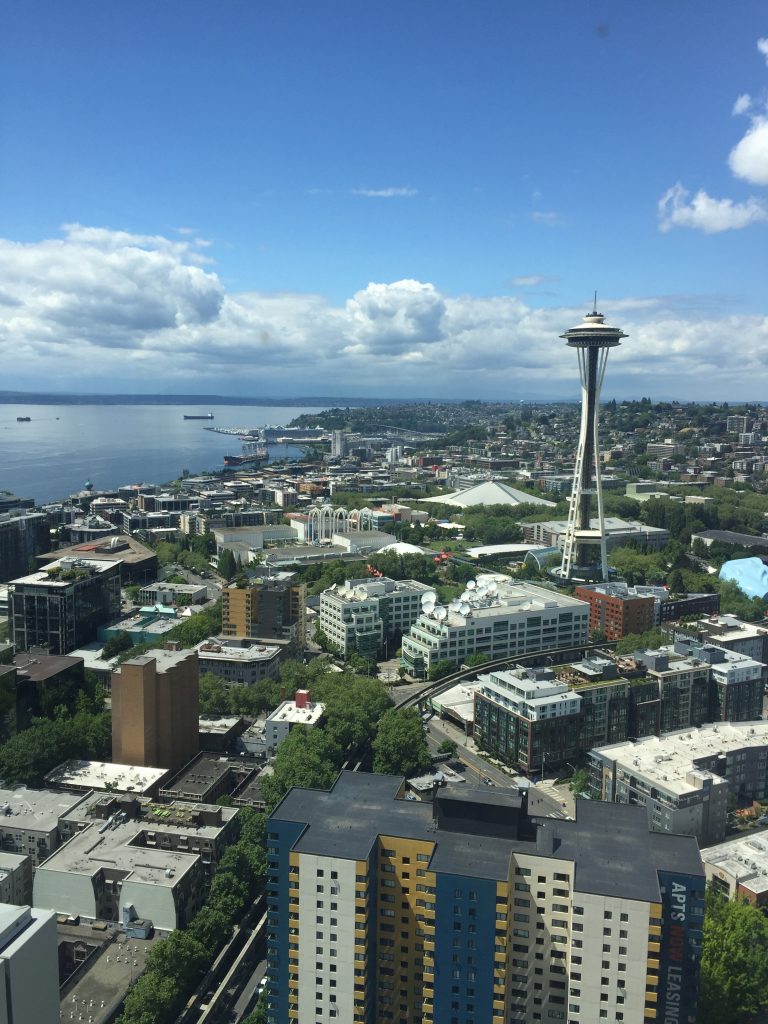 The temperature was warm with a slightly cool breeze. The water was just warmed up enough so we could jump in and play. Evie was the first one to want to jump in. She’s four and a half years old. She’s been taking swimming lessons. She loves the water. 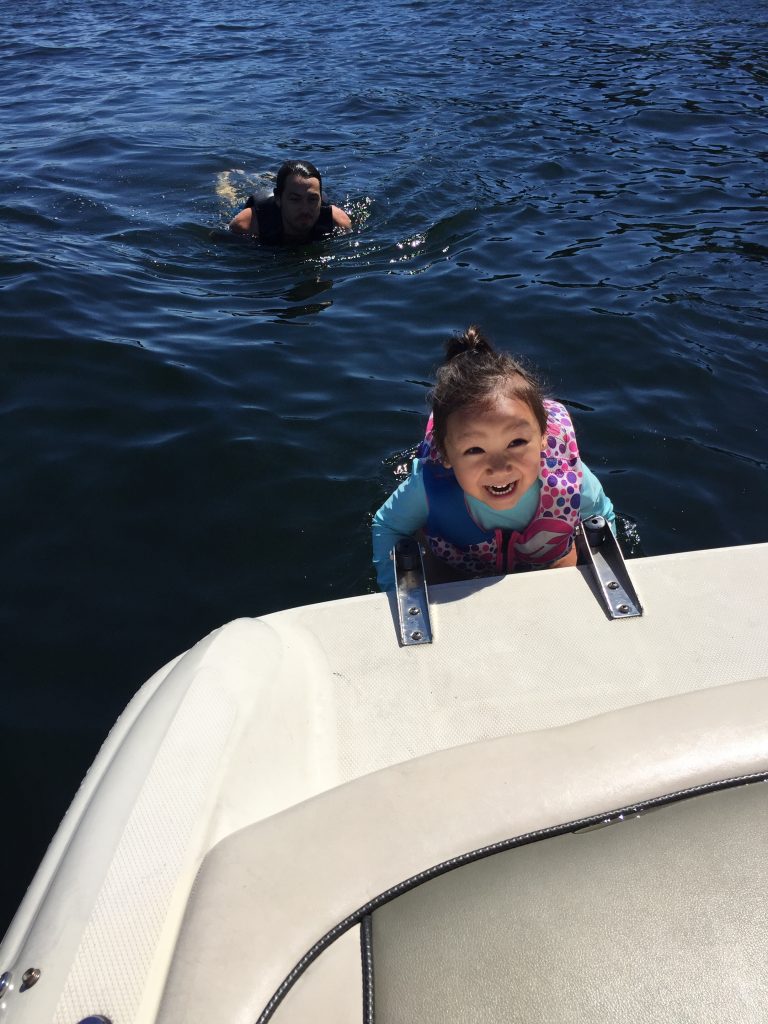 She’s fearless. That’s Tim, standing by, waiting for Evie to turn and jump in. 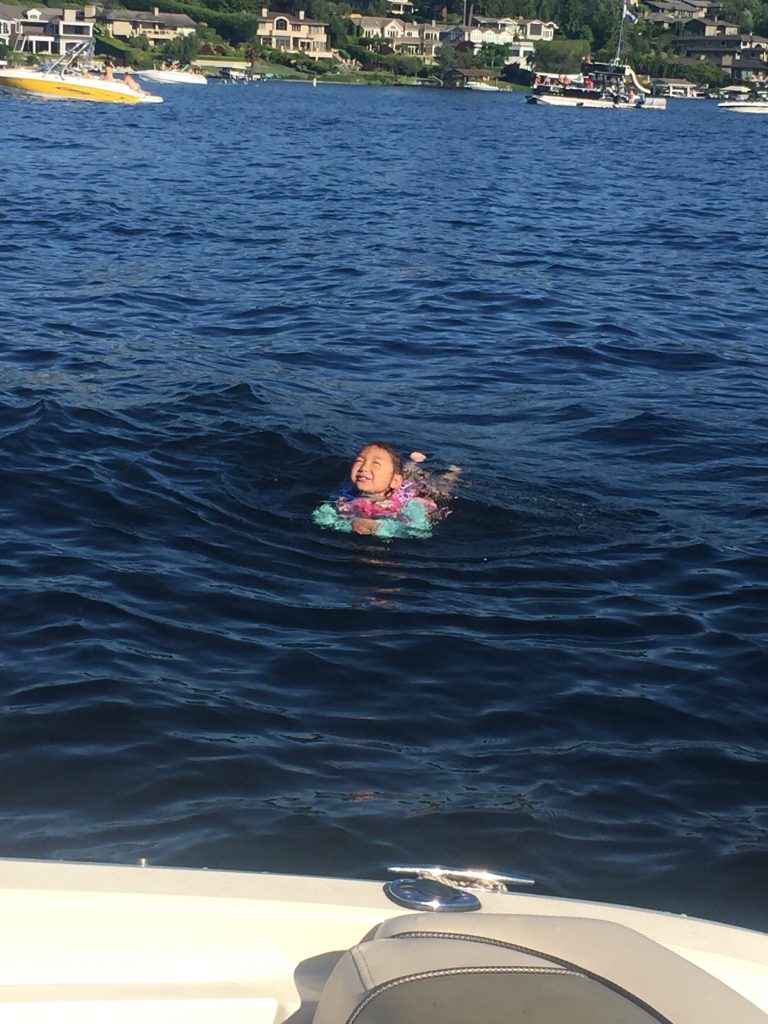 Our good friends Shane and Olga, joined us on this outing. 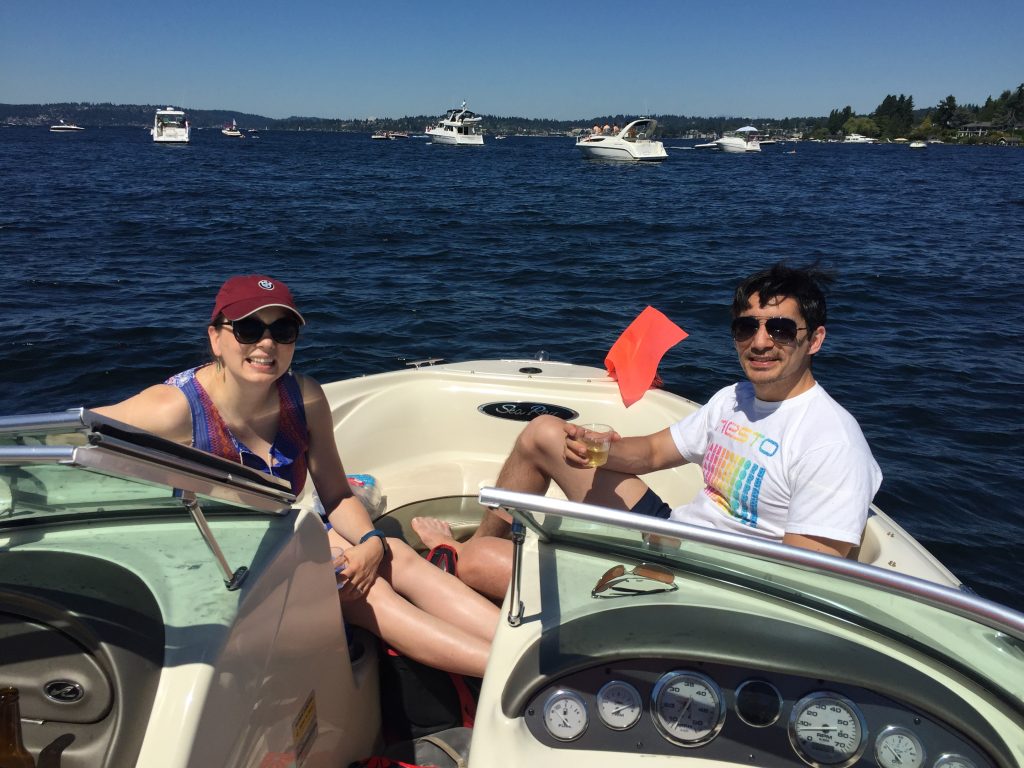 Then there is Captain Jesse and Jennypurr. 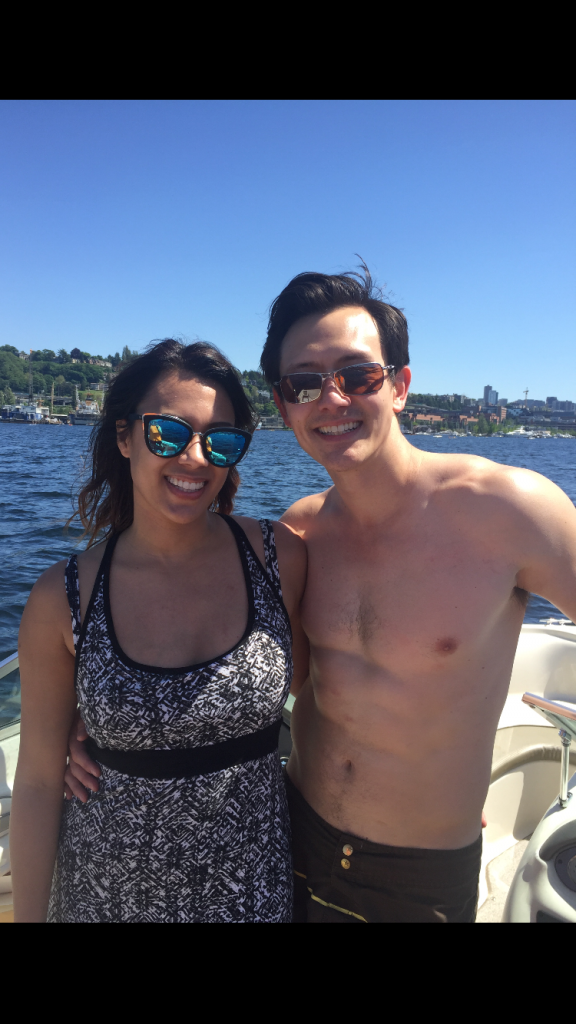 And last but not least Pauline, who is expecting Ellis, a baby boy, to arrive sometime in July. Then Evie will have a little brother. They’ve been prepping Evie for his arrival, explaining her important role in welcoming her baby brother into this world. 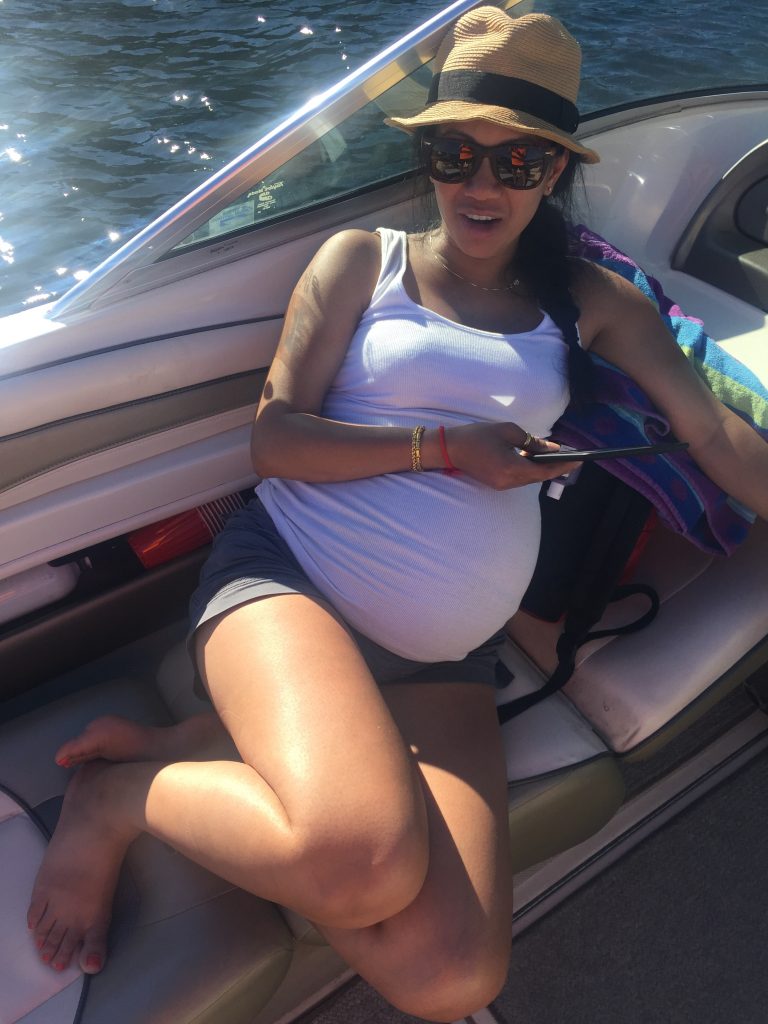 We drove over to the Kirkland side to a favorite cove, Yarrow Bay, and dropped anchor. After Evie jumped into the water, the rest of us followed her lead and jumped in too.

At one point, I was on a raft and tethered to the boat and I was eating some shrimp cocktail. I saw Evie watching me. So I said to Tim, “I hope a shark doesn’t jump out of the water and take my shrimp from me.”

Evie quickly corrected me and said, “Grandpa, sharks live in saltwater, not in lakes!”

(I don’t think I even knew what a shark was when I was four years old.)

….Oh!… and did I mention that she uses words like camouflage and concentrate!?!?!

So smart and so aware for such a young stinker.

We had water bazooka fights…… 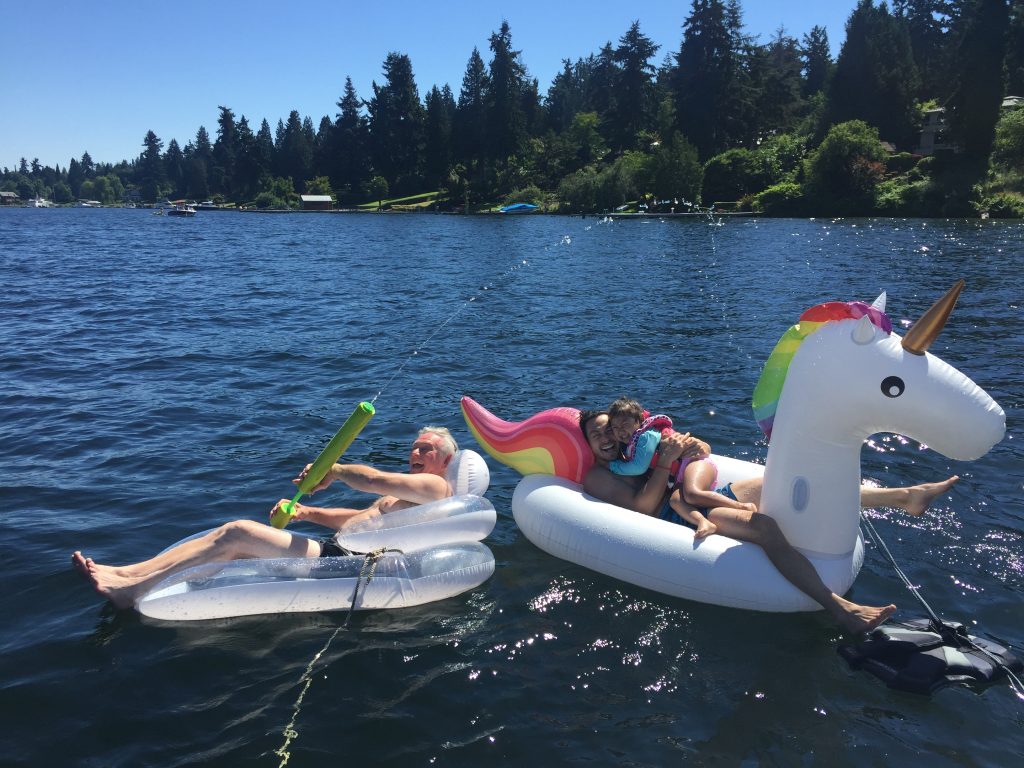 ……and then some leisurely lolligagging on the rubber rafts. 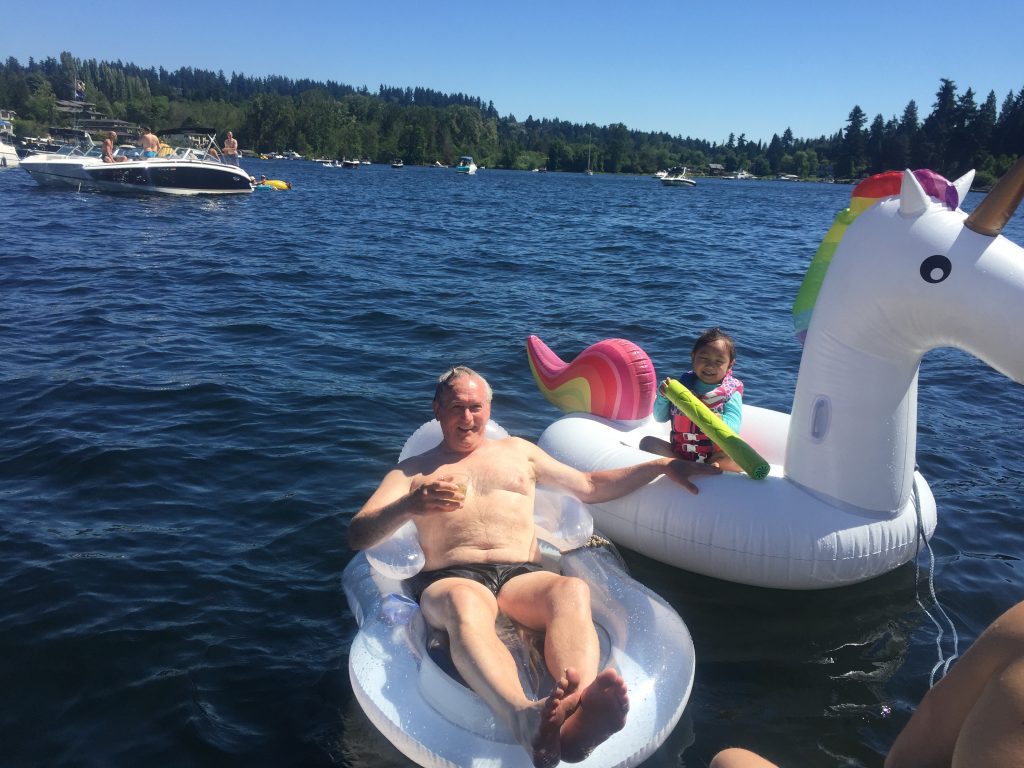 ……and then there were some magical moments centered around a sparkling Unicorn! 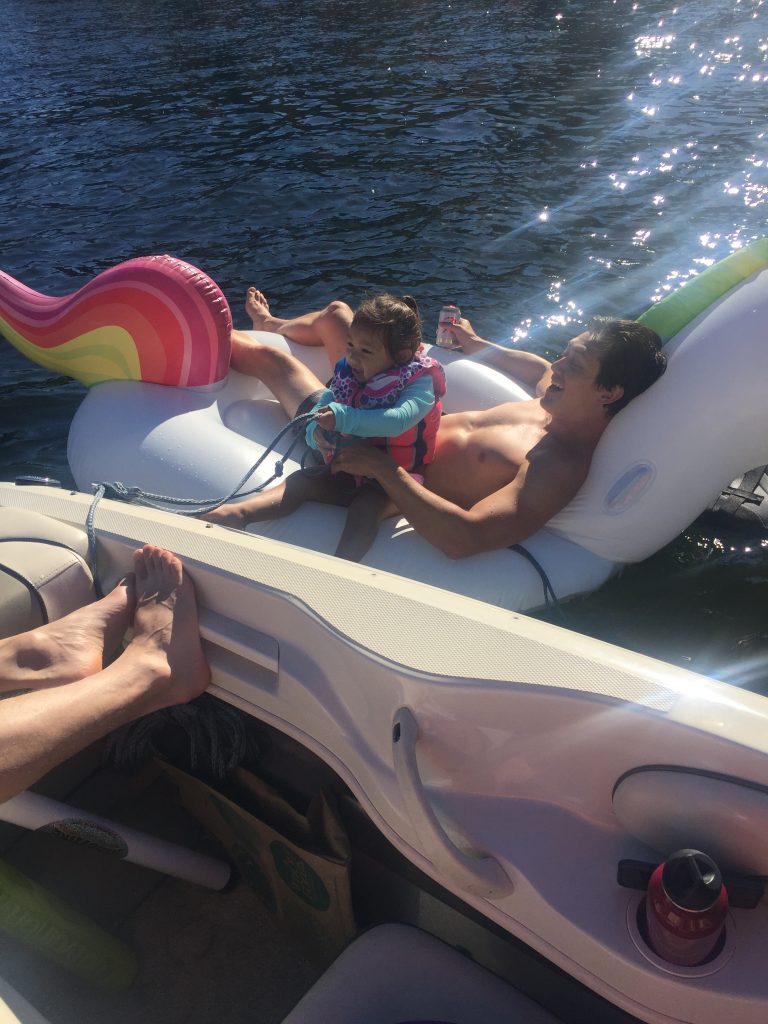 …And time to do a selfie of ourselvesies… 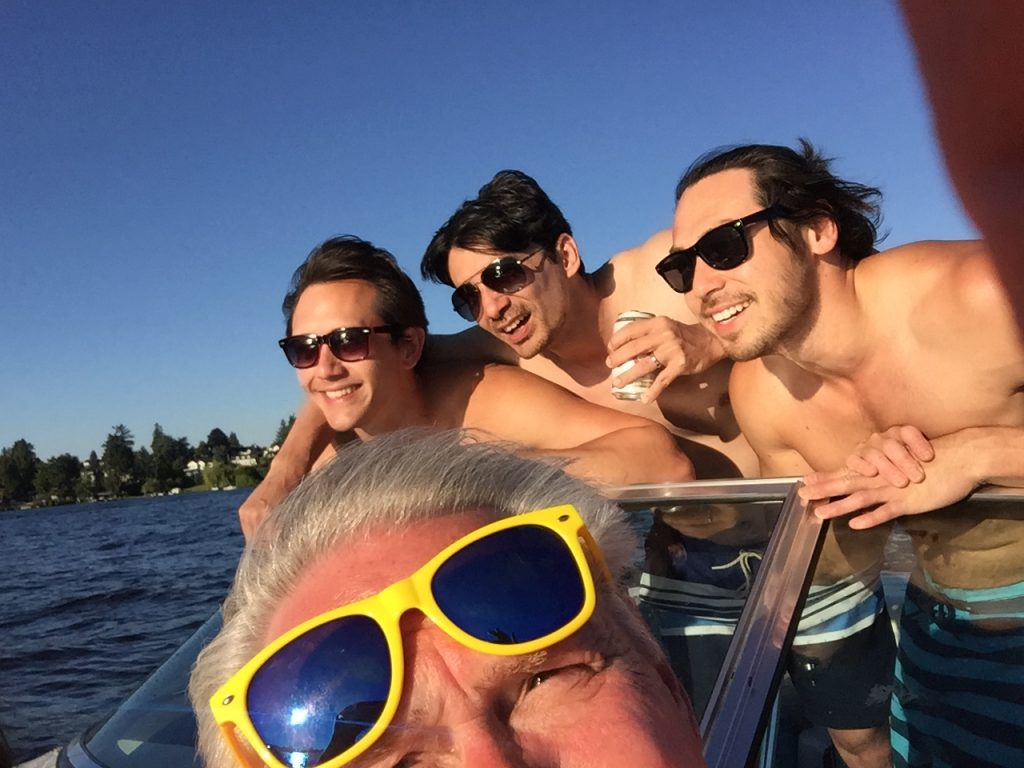 But all good things come to pass and the day was winding down as we returned to the boat launch on Lake Union. 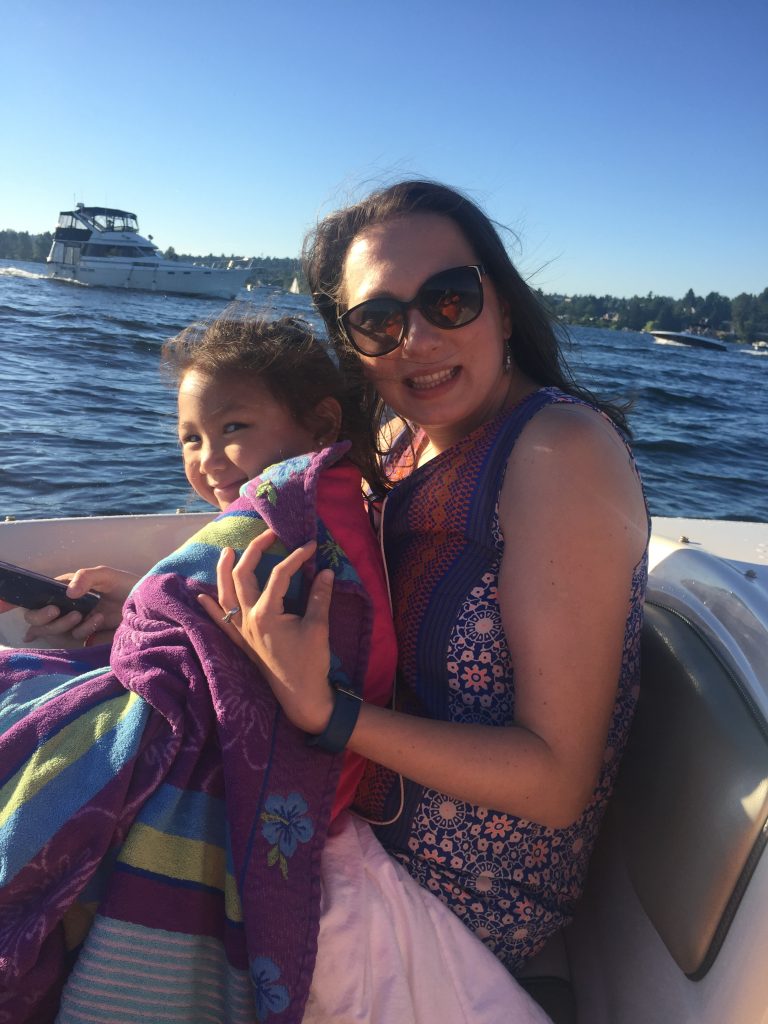 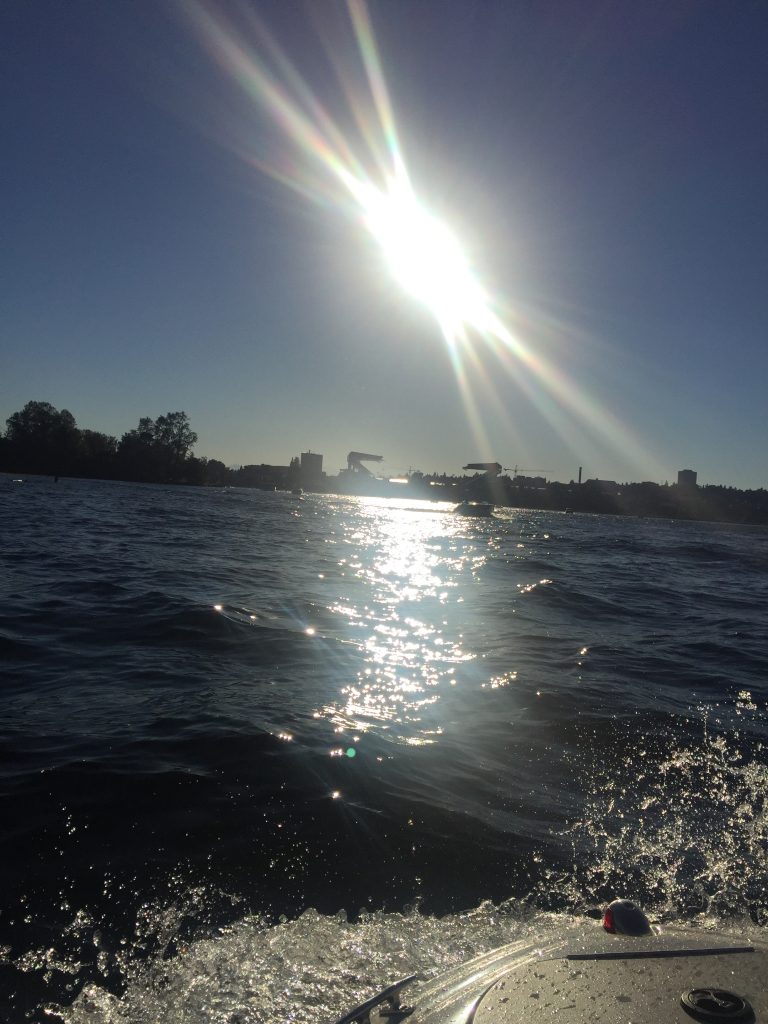 I put a lot of effort and energy into raising the kids but I always felt like I got way more back from them than I ever gave to them. Today was just such a day!

For me, every day is a Happy Father’s Day.

Scanner’s Dilemma: Wanting to do it all