As a scanner, I want to learn things. I’m open-minded and I like to explore different cultures and different points of view. I want to see how the other guy sees it. I didn’t even think about it at the time, but I had all those traits within me, working for me, during my tours to South Korea, when I was in the Air Force.

Being amenable to and embracing unfamiliar situations, and being interested in others, opened doors for me, helped break through cultural barriers, and set me up for some very memorable times in Korea, musically and otherwise. I lived there for a total of 12 years. I have shared in other posts about my experiences there.

In the previous blog post, “Doing What You Love“,  recounting the story about being in the studio with my son, Tim,  as a Backstage Guest on the Bob Rivers Show, reminded me of a time I was in another studio of a different radio station. But it wasn’t here in the States. It was in South Korea. And I wasn’t just listening to the show. I was a guest on the show.

I was there with a friend of mine, who was a popular Korean singer at that time. His name is Kim Tae-gon: 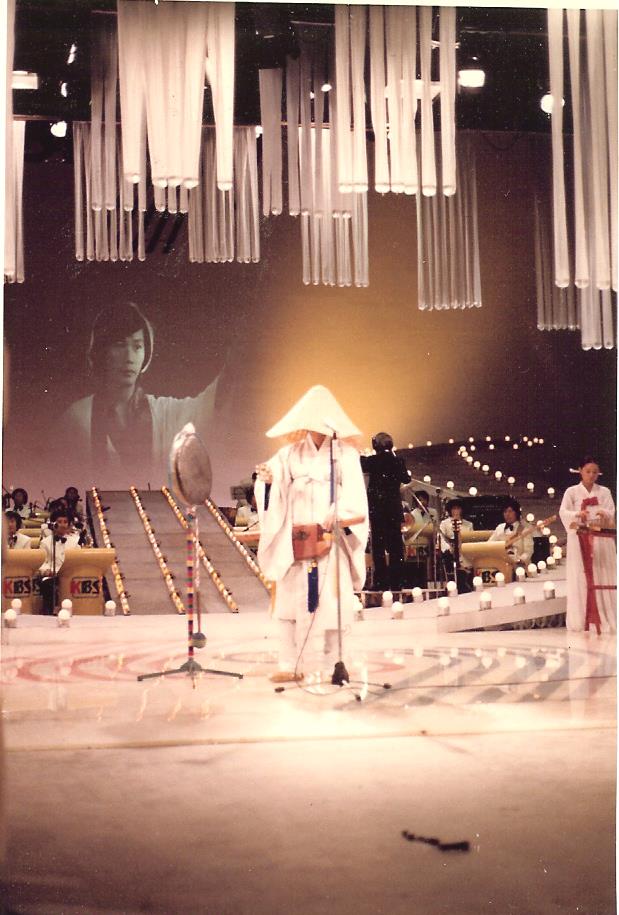 During the ensuing year, I went with him on several occasions to Korean TV and Radio Stations (KBS, MBC, and TBC) where he was scheduled to perform. Sometimes he would have me sing with him and sometimes he’d push me onto the stage and tell me to sing one of his songs by myself.

So, one particular day, he called and told me to come up to Seoul to sing on a radio station with him. I got on a bus and headed North on the 40-mile trip to Seoul, the capital of South Korea.

As the bus crossed a bridge, I looked down the river and I saw a little girl standing in the rain, holding an umbrella over her Mother who was washing the family’s clothes at the edge of the river.

I immediately thought about how that scene typified one of the virtues revered by Koreans. It’s called filial piety. It is all about a son’s or daughter’s devotion to parents or family. The girl was standing in the rain keeping her Mother dry.

So as the bus moved on down the road, I replayed that scene in my mind and I felt compelled to write a song about it.

(That was the second time I had the urge to write a song on a bus without a guitar or a recorder. The first time that happened was when I wrote my very first song, “Remembering Good Times”.)

So I quickly borrowed some paper from a young elementary school student on the bus, and I penned the words which tell the story.

The song is called, “She Stood There With An Umbrella”. This time I had to memorize the song and hold it in my memory until I finished the day’s upcoming events with my singer friend. Then I took the bus back home and was able to record it:

Anyway, I arrived in Seoul shortly thereafter. I met up with Tae-gon and we were off to the radio station. Once we got there, Tae-gon convinced the radio station managers to have me sing instead of him.

So we went into the studio where Tae-gon had arranged for me to sing a song by another popular singer whom I had met before. It wasn’t one of Tae-gon’s songs. Tae-gon was selfless that way. He was more concerned about giving the audience a good show. He was popular and secure in his talent and following.

So we squeezed into a little studio booth that was about 5′ X 10′. The host of the radio show was Cha In-Tae and the show was called “Together with Cha In-Tae”. It was a variety show. The booth had a long, narrow counter with three chairs and then standing room only behind the chairs.

Mr. Kim was on the left with his guitar. Mr.Cha was in the middle. And I, Mr. Adams (but you can call me Dennis),  was on the right side with my guitar. Also there were two comedians and two actors in the booth standing behind the three of us. All of us would play a part on Mr. Cha’s show.

But Mr. Cha started with me. He asked me how long I had been playing guitar and I told him since I was 12. He was very kind and gave me a warm welcome. Then I began playing and singing the song. Tae-gon backed me up with an impromptu (we didn’t rehearse it) lead guitar part during the middle of the song. I was impressed by that.

Then the actors and comedians got into the spirit of the whole thing and did background vocals on the “wat-doo-waddy” part of the song.

It was a well-known pop song, at the time, that had recently been recorded by a very popular singer named Cho Young-Nam. The song was called Sarang I Ran (“Is this Love?”):

So that day, a good time was had by all.  When it was all over, they gave me a studio recording of our (Kim Tae-gon and I)  part of the show. That was a really great year, musically, for me, thanks to the good graces and generous spirit of my friend, Kim Tae-gon.

As a footnote to this story, it’s ironic that Kim Tae-gon picked Cho Young-nam’s song for me to sing that day, because Cho young-nam was actually responsible for me meeting Kim Tae-gon a few months earlier.

Oh and one more thing. “She Stood The re With An Umbrella”  was published in a Korean magazine called, “Saem Tau”, a magazine similar to our “Reader’s Digest”.

One of my Korean instructors, Terry Kim,  liked the song and the story behind it so she spent one weekend translating it into Korean and then she sent it to her good friend at the magazine company and he published it. I have her to thank for that.

When I went to work for NSA, my sons were in High School. One of them, Jesse, had a talent for drawing. He did an incredible caricature of himself…. 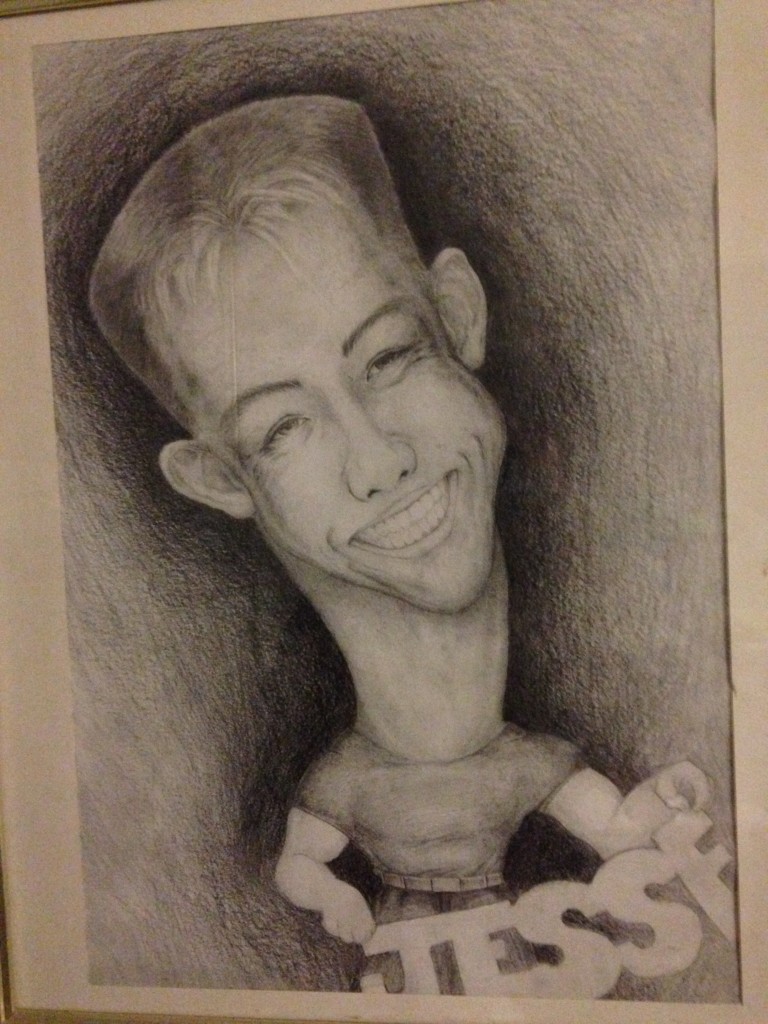 and several stipples (where you only use lighter and darker dots) to create images. (Only dots!)

He did a grasshopper, hedgehog,  hummingbird, and a waterfall scene: 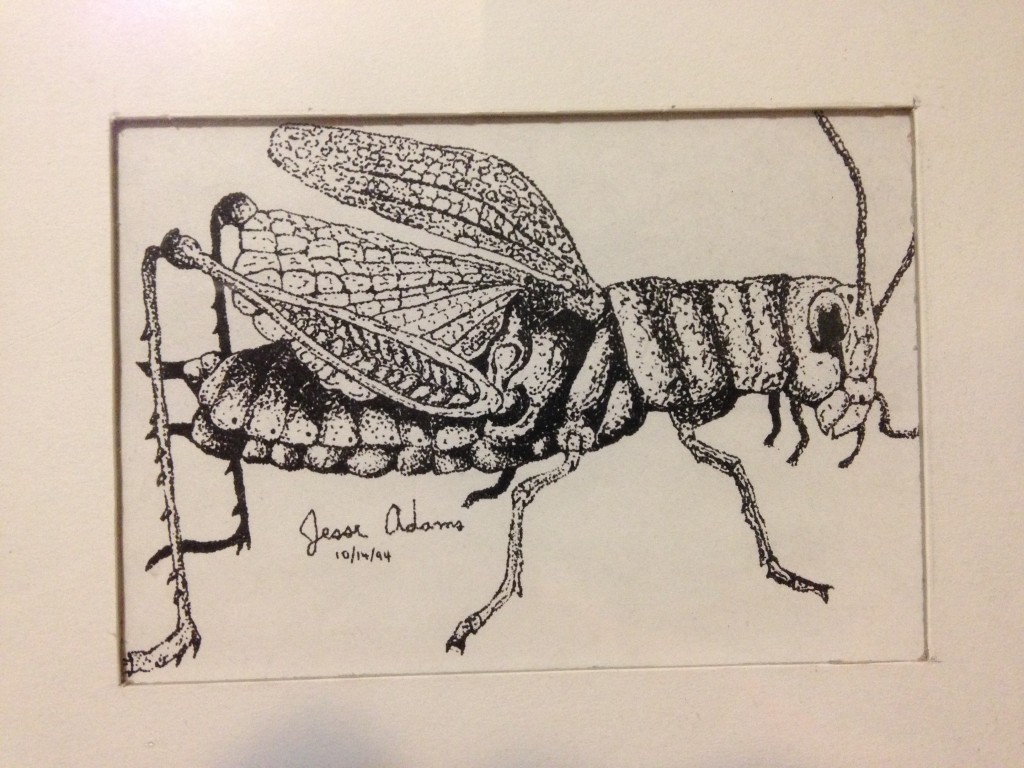 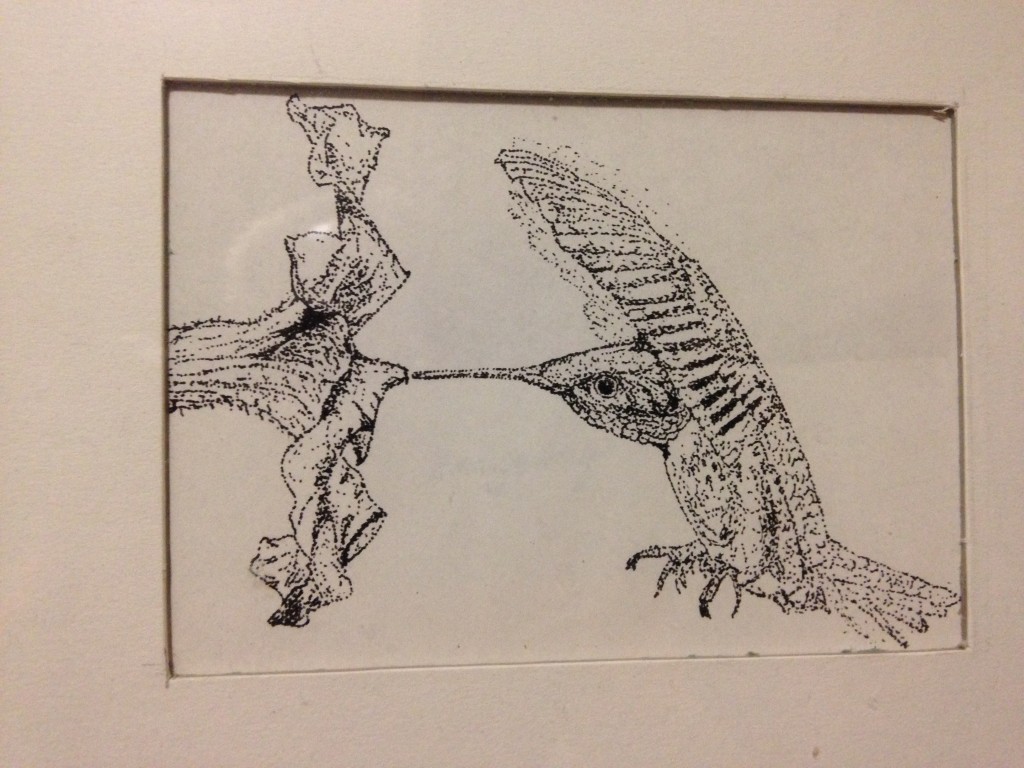 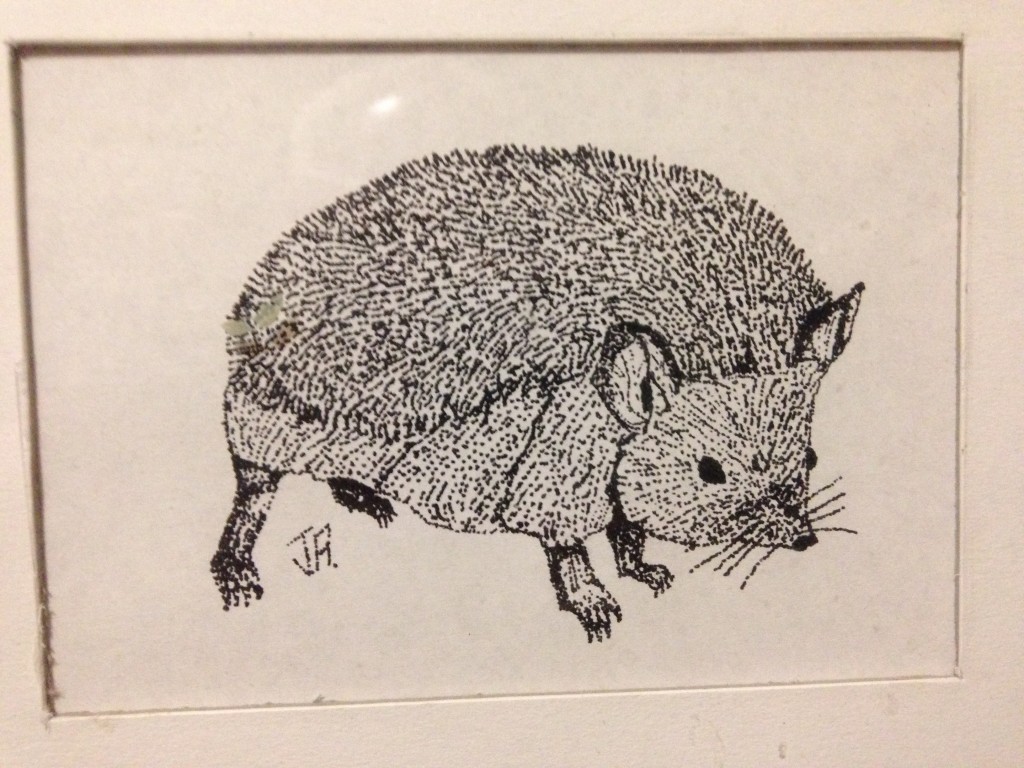 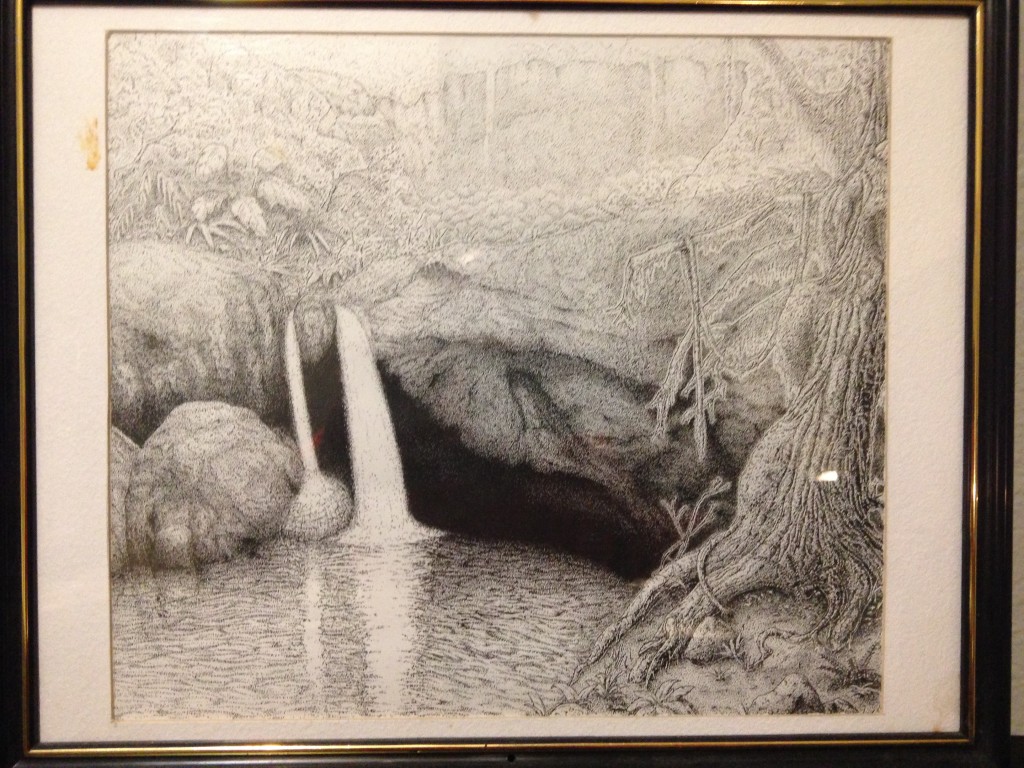 DID  I MENTION HE DID THESE WITH JUST DOTS??? That still blows my mind!!

He came home one day and said that in his painting class they were assigned to paint something. This would be the first time he ever painted anything. He asked me for some idea what to paint.

I had recently conceived an idea for a project involving my song (above) called, “She Stood There With An Umbrella“. I wanted Jes to paint the scene I saw that day in Korea as I rode the bus across the bridge and saw the little girl holding the umbrella over her Mom.

Then I would build a frame for the canvas painting and I’d embed a mini-recorder into the frame with a button on the frame. Anyone looking at the painting could press the button and listen to the recorded song to learn the history behind the painting.

The next morning I woke up to go to work and Jes had propped up the finished painting on the seat of a chair that he put on top of the dining table so I wouldn’t miss it on my way out to go to work. 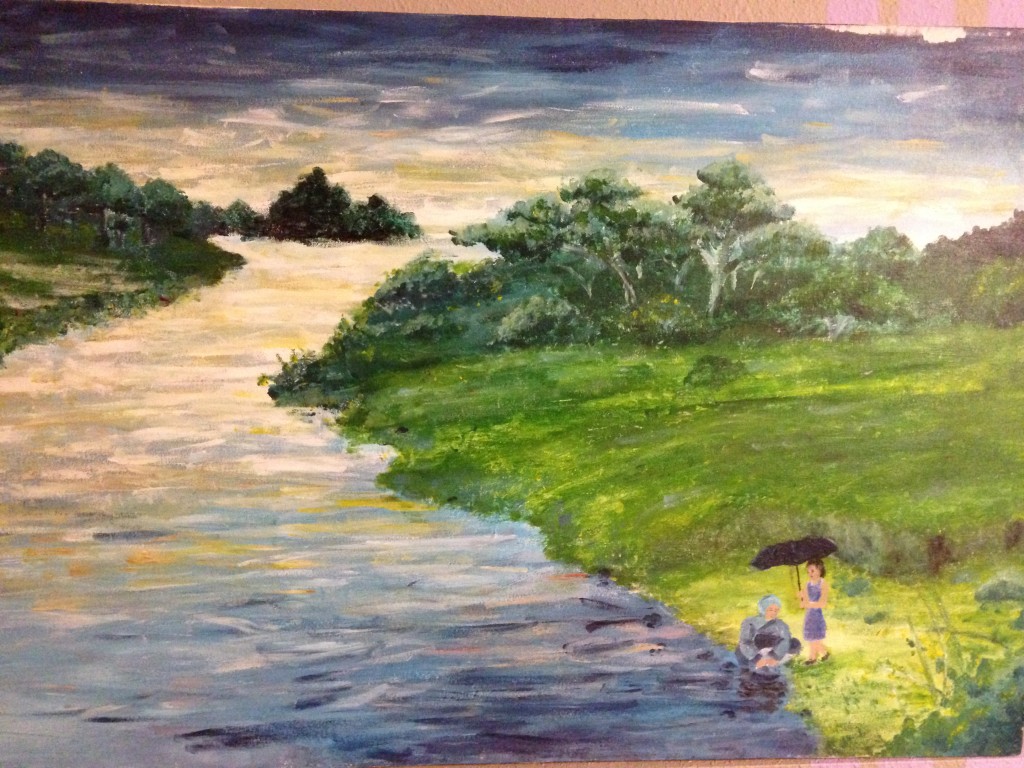 To me, it was perfect. It was a great first attempt at painting.

And it was just like I remembered it that day so many years before as ………………….“She Stood There With An Umbrella”

“There wasn’t one house in sight. Where they came from Heaven knows…………”

Doing What You Love

Doing What You Love