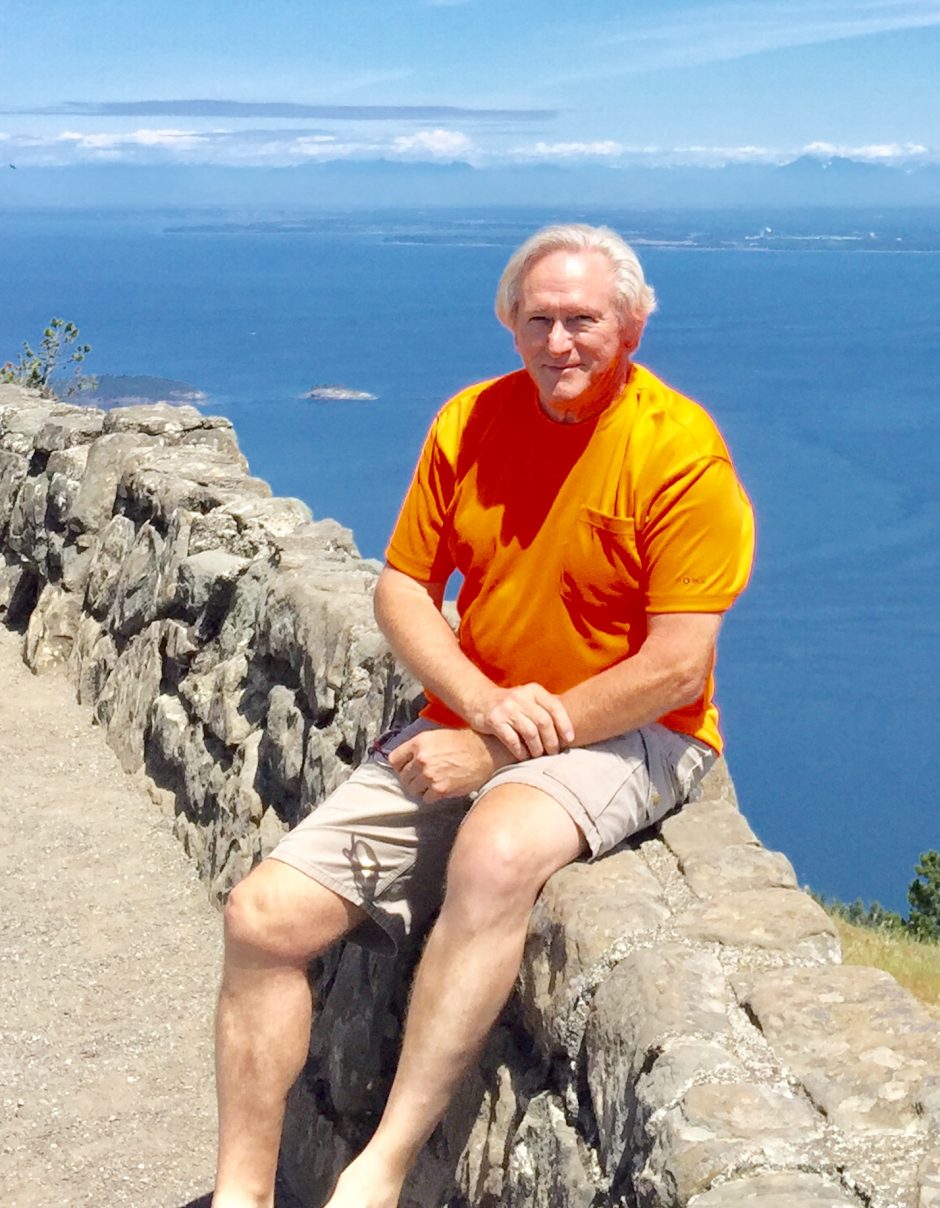 Last month I intended to visit the San Juan Island, not only for the fun of it but also for the purpose of doing Sound Bytes #4….”San Juan Island”, which I mentioned in a previous post (Sound Bytes #2….”Sound Views From Anacortes”). But I couldn’t get a reservation on the ferry for the times and days I needed to get on it.

So I looked at the ferry schedule for Orcas Island and I was able to get a reservation for the days and times I had planned to go there.

So, I decided to do Sound Bytes #5….”Orcas Island” first.

(So, just so you know, Sound Bytes #4, will follow this one, although it is out of order.)

“Romance On The High Seas”

(Translation: I’m reading a Beverly Jenkins‘ romance novel, called “Tempest”, which is the third book in her Rhine Trilogy: “Forbidden”, “Breathless”, and “Tempest”.) 🙃

I boarded the ferry at Anacortes at 0730 a.m. on a Monday, bound for Orcas Island. It takes an hour to get to Orcas Island and it was a cloudy morning.

So instead of tending to the view outside, I felt like continuing to read the “Tempest”, which I had just started reading the previous day.

I’ve always liked riding ferries. They’re not just transportation to me. They are an adventure. So continuing the novel just enhanced that spirit of adventure within me. I like Beverly’s sense of romance, sense of humor, and sense of justice.

One hour of “danger, romance and intrigue” later 🤨 , we arrived at Orcas Island ferry dock.

The building on the hill, behind the ferry dock, is the Orcas Hotel, where I stayed that night. So I made that my first stop of the morning.

I didn’t expect to check in that early (it was 0830 a.m.) but I did want to have breakfast there and check out the place.

The Orcas Hotel is an old, but charming, historic house remodeled to include 14 rooms, a coffee shop/Cafe, and Gustavio’s Bistro (the restaurant) and a bar/lounge area. The bathroom and private showers were just down the hall from my second-floor room (seen here to the right). The coffee shop/cafe was just down the stairs (seen below).

It all had a kind of homey feel. It reminded me of an earlier era in my childhood when we used to visit my grandparents at their farmhouse out in the country.

It’s quiet here by the ferry and very picturesque.

Actually, the whole island is kind of quiet, in general. That’s been referred to as “The Magical Island Pace”. But if you check out the information on orcasislandchamber.com , you’ll see that the Island has a lot to offer.

I like eating outside so I sat here at this little table on the wraparound porch, ate breakfast, and drank some coffee while I continued reading my novel, “Tempest”, for about an hour.

I arrived on an early ferry that morning, intentionally, so I would have time to drive all over the island in one day. So that was my next move.

But before I moved on, I wanted to just relax and read this book in this perfect setting and savor the beauty before me, the solitude on that porch, the harbor sounds, the faint conversations of passersby, and the perfectly comfortable temperature of the morning air.

About an hour later, I was ready. I left the hotel and headed north on Orcas Road, toward West Sound and then west toward Deer Harbor.

It was pretty there but it didn’t quite capture or hold my attention. So I moved on.

I drove back and reconnected with Orcas Road and continued north to Eastsound, the heart of the island that seems to be the center of commerce and community activities.

The next stop was Buck Bay Oyster Farm near Olga.

Laura, my waitress at the Orcas Hotel that morning……..

……said she had a second job at the farm and she asked me to come there for a visit. So I did. I had lunch there.

I had never shucked oysters before so she took me through the process of how to pick and shuck them without stabbing yourself.

After picking them, I supplemented the meal with some smoked salmon, ceviche with a mignonette (a sauce for the oysters), some hot sauce and chips and headed to the outdoor space to start shucking.

That was what I call refreshing!! Thank you Laura!

Next I was headed to Doe Bay, another small hamlet on the southeast side of the island. I believe it was Laura that told me about the islands which you can see from Doe Bay, which she thought resemble a dragon swimming in the Sea.

When I got there, I spotted the “dragon” she had mentioned. I used my iPhone to get “the whole dragon” into one frame but it was too wide. So I took two shots.

The head and shoulders…..

The back and tail….

(As I’m writing this, I suddenly noticed a “bonus” in this shot itself! In the foreground, it looks like an alligator, submerged and camouflaged in the edge of the shoreline, ready to go “Rambo” on anything that moves around it.)

Do you see that? I’m so brave to just calmly stand there and take the picture, don’t you think?

After that, I went in to the Doe Bay office/store and I was telling the lovely and intelligent (she forced me to say that! 😉) Phebe (a clerk who worked there), about not being able to get it all in one shot. She asked me, “Did you try a panoramic shot?”.

I even knew about the panoramic feature on the iPhone but I just didn’t think to use it because I hadn’t taken the time to familiarize myself with it.

So thanks to Phebe for reminding me of it, so I could “capture the dragon”….

The next stop was the one that I had been waiting for….

I was headed to the top of Mt. Constitution, the highest point on Orcas Island (about 2400 feet) and it has the most spectacular views of all the other San Juan Islands. You can also climb the stairs inside the tower that is erected at the top of the mountain, to get a little higher view of the surrounding islands in the Sound.

This is a view through one of the tower windows as you ascend the tower stairs.

After Mt. Constitution, I went to another little hamlet called West Beach and then I returned to the Orcas Hotel for dinner.

The next day (Tuesday) I was scheduled to take a 30-35 minute ride in a biplane, which flew over all the islands. I was really looking forward to that.

As I was having dinner….

I got a text from the airport saying they wish I had let them know I was not going to be able to be there for the biplane tour. What?!?

Somehow, when I made the reservation, I heard 12 noon on Tuesday and Ronnie (the lady who scheduled my tour) thought it was 0530 p.m. on Monday night. I don’t know how we could be so off, right?

I quickly texted back and told her that I thought it was for the next day and it was the most important thing I had to do on the island so I totally didn’t want to miss it. But there was no way to salvage the mishap. So I have to reschedule that tour and then the video clip I get from that aerial tour will be used for Sound Bytes #6. So be on the lookout for that.

After dinner I went to bed early. I woke up about 0430 a.m. and I looked out my window and saw this.

I gazed at the moon for a moment, smiled and then went back to sleep.

That morning I slept in longer than I thought I would. I had a late breakfast and then retreated to the wraparound porch to my favored seating to continue the “Tempest” until checkout.

I only had two more places to go before catching the afternoon ferry.

I wanted to drive out to Cascade Lake. It’s a beautiful place for a picnic lunch, a hike, or a kayak or SUP (stand up paddleboard) adventure.

I parked my car and I walked over to the area where the picnic tables are and I ran into two women who were on the ferry with me.

When we were on the ferry, I asked them to take a couple of pictures of me (which I would later insert into this post when I started writing it). I remembered them and they remembered me. They were having a picnic lunch just like I came out to do.

I also wanted to check out the Rosario Hotel Resort area. It seems to be the nicest hotel on the island. I didn’t go inside. I just looked around the area. The grounds are well-manicured and it’s a lovely location. I want to stay there the next time I go there.

I want to sit here and read a book some day or share the space with a good friend, with whom I can talk about anything and with whom laughter comes easily and often.

Return to the Orcas Hotel

So after Rosario, I drove back to the Orcas Hotel, ordered a rum and coke and sat down on the steps, in front of the wraparound porch, to read more of the “Tempest”. I had a couple hours to kill before my ferry was scheduled to arrive.

So as the afternoon slowly slipped away, I eventually found myself in the queue at the parking lot of the Orcas Island ferry terminal, overlooking a park that overlooks the ferry terminal. As I waiting for the ferry to arrive, I finished the “Tempest”.

I was only there for two days and one night but it seemed like I’d been away for a long time. I felt revitalized.

I learned a few things, met a few nice people, and embraced the beauty of Nature at its finest.

The “way cool” tune, accompanying this slideshow of the Puget Sound around Orcas Island, is called “Barley”. It’s a song sung by Lizz Wright, on her 6th Cd, “Grace”, and was written by Allison Russell.

In a previous post, “Sound Bytes #3….”The Wright Sound (Lizz Wright)”, I sincerely referred to “Barley” as a “delightful, diverting discovery”. I really love the song.

I liked the repetitive aspect of the song and it was fresh on my mind at the time I wrote a song called, “A Little Lost” (To hear it, click the link and then scroll to the bottom of the post.)

Hope you enjoy the beauty of “both sounds”…..

P.S. I decided to make this list (below) of each post in the Sound Byte Series and place it at the end of each post, to help you navigate more easily to and from each post: