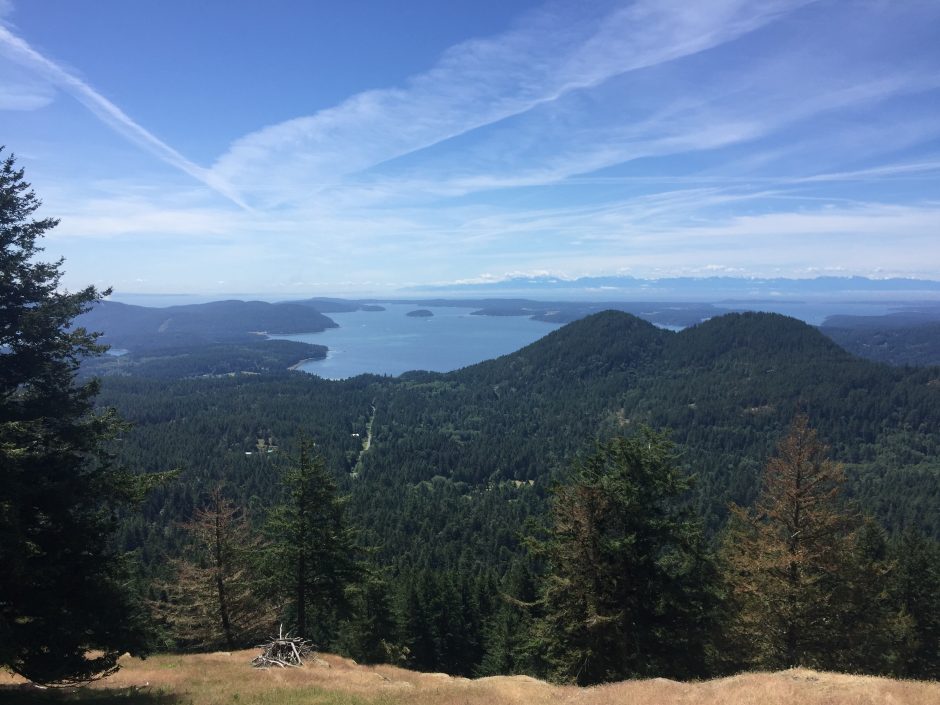 But after I thought about it, I realized I had to go back to Orcas Island to do a few things I was unable to do on my last visit to the Island. I’m pretty sure #4 🤨 will be next, but…..

Oh well…..I think I can safely say that #4 will be here when you see it. (How’s that for being non-committal?)

(1)….do a biplane ride over the San Juan Islands to see it all from above, and to record the experience and share it with you in the form of another Sound Byte in the final post of my Sound Bytes Series.

(2)….stay overnight at the Rosario Resort and Spa. (Click on the link to the left to learn more about the Resort. It’s a really informative website.)

(3)….do another Sound Byte, from my room at Rosario, and include it in this post. (It’s at the bottom of this post if you want to scroll ahead to it now.)

This Sound Byte highlights a beautiful song called, “Silence”. It’s a Lizz original. She wrote the song, herself. It’s the last song on her debut CD called “Salt”.

The above photo reveals the serenity, beauty and quietude of Cascade Bay as seen from my room called the “Harborside Queen” room.

(4)….enjoy some fine meals with great views at the Moran Mansion’s Restaurant.

Then, after all that….

….I would get on the inter-island ferry and head over to San Juan Island.

As I was ferrying across the Puget Sound to Orcas Island, I was happy to get a phone call about 11:30 a.m. from Rosario saying my room was ready. That was welcome news!! Now I could check in, unpack, and start my adventure as soon as I arrived.

I entered my room, sat down on the edge of the bed, and looked out toward Cascade Bay, the gray skies and the slight drizzle.

I was scheduled to do the biplane tour at 5:30 p.m. that evening but my weather app said, “Not today!” So I called Roni, who runs the business with her husband Stuart, the pilot, and she said I could reschedule for the next day at the same time in the evening. (They said that is the best time of the day to see it all).

I quickly looked at my weather app again and it said the next day would be sunny and bright. I was cleared for take-off! 👍🏻

I wanted to hike before dinner time and the brochure I read made this sound like a good hike and it was only a mile long.

As I hiked along the dirt path, it started to rain lightly but not enough to stop me from going on.

I heard a branch break and I looked up and saw this doe checking me out.

While I quickly got my camera ready to take the picture, I looked at her and asked, “Is it beginning to rein deer?”

She looked at me, unamused, and just kept chewing and grazing. But the look in her eyes told me she was thinking, “Omg, like I’ve only heard THAT ONE a thousand times!”

On both Orcas and San Juan Islands, I saw about 25-30 deer and one approximately 4-point buck.

Some man told me that the deer are overpopulated on the islands. So the Island folk are trying to figure out a good way to control the population.

I told him to tell the Island folk I know how to control it.

The hike was good but not as great as the brochure seemed to make it out to be. But when I got to the end of the path at the beach by the bay, there was some good “glass”. It was so calm down there even though it was about 2 p.m.

This one is seamless!

The whole area around the Resort was also calm, serene and quiet. The peacefulness was priceless. It was worth going there just for that.

I had a little time to spend walking the grounds, taking photos, before my dinner reservation at 8:30 p.m. The rain had stopped but it was cloudy and gray for awhile (about 1:30 p.m.)…….

I thought all shades of the day were gorgeous. I appreciate both rainy and sunny days. And I enjoyed both at Orcas Island….

This is a zoomed-in view of the Moran Mansion at Rosario Resort and Spa, which I took from the balcony of my room. It had a great view of the Bay and it was about a quarter-mile from the Mansion, where I had dinner that night. I usually eat mostly fish and chicken but sometimes I like to have red meat.

So that night I chose the North Cascade Ribeye:

Underneath the beef there were crimini, shiitake, enoki, new potato, and a bordelaise sauce.

I actually ate the flowers first, by themselves, so I could see what they tasted like before I got into the rest of the dish. I thought they were quite good.

So when Emily came back to check on me and see how I liked the flowers, I told her, “I just loved eating the flowers! I felt like I was becoming one with nature. So now I’m going to start eating the flowers in the vase on the table……Stop me if I’m wrong!!”

Day 2 (The Next Morning)

The alarm went off at 0530 a.m. I could have slept in but I wanted to get up before sunrise to do the Sound Byte (as I mentioned above, a Lizz original, called “Silence”) for this post.

This time of the morning has always been my favorite time of the day, no matter where I’m at. I love the peace and quiet before the world begins to stir. I don’t always get up at that time, but when I do, it’s always special to me.

“Silence” is a beautiful song with beautiful lyrics, praising the magical song of silence that quietly emanates from the Earth and all its splendor and beauty.

P.S.  I decided to make this list (below) of each post in the Sound Bytes Series and place it at the end of each post, to help you navigate more easily to and from each post:List