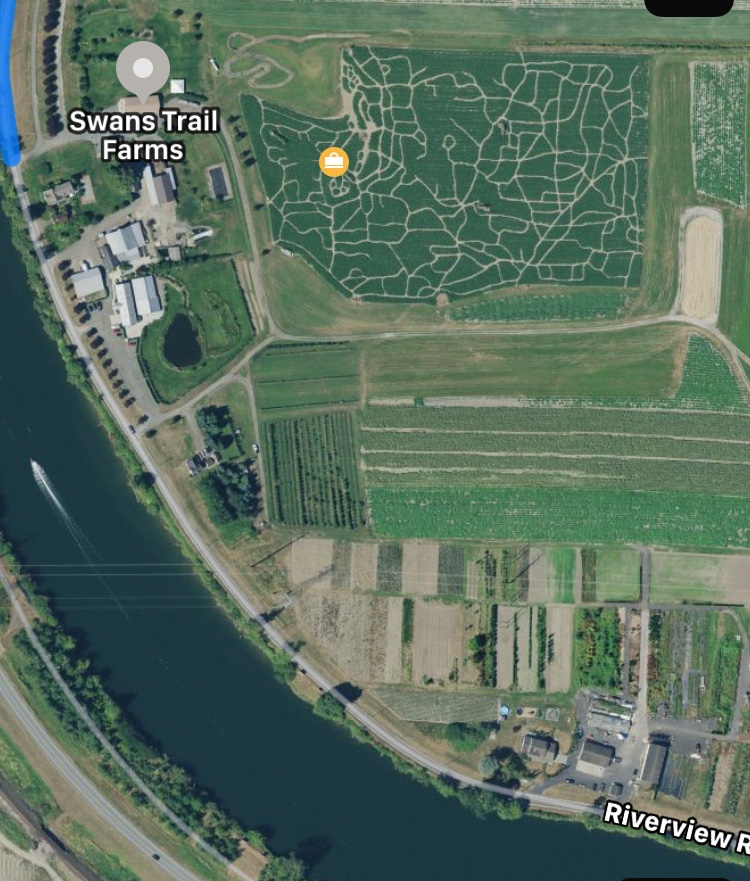 In a previous post, called “Shhhh! Genius At Work! (unearthing her GRACE)”, I wrote about my recent trip to the East Coast to see and hear Lizz Wright sing in Connecticut and Massachusetts. She was kicking off a tour to promote the release of her new CD called, “GRACE”.

( By the way, if you haven’t heard it yet, you’re missing out on a really good thing. You can find it on Amazon or iTunes.)

Anyway, in that post, I mentioned that while I was driving to the Massachusetts venue, I was listening to “GRACE”.

I was enjoying Lizz’s new music so much I missed my turn to Massachusetts and I suddenly saw a sign that said “Welcome To New Hampshire”.

So after I corrected my course and was heading toward Massachusetts again, I had to laugh and I thought to myself, “I get a little lost in her (Lizz), sometimes.”

I get in a kind of dreamy state of mind when I listen to her music. She is and will always be my favorite singer.

Then I thought that sounded like a good title for a song.

So, I have been thinking about that ever since then, and just two days ago I wrote the song.

But I decided to call it, simply, “A Little Lost“. (The song is at the bottom of this post.)

So, for the last couple of days, I was practicing the song, so I could do a video of it, to include in this post. I was thinking about several scenic places I might do the video.

This was just one of the places I was considering. It’s a little corner of the historical Pioneer Cemetery in Mukilteo, Washington, and looks out at Whidbey Island. 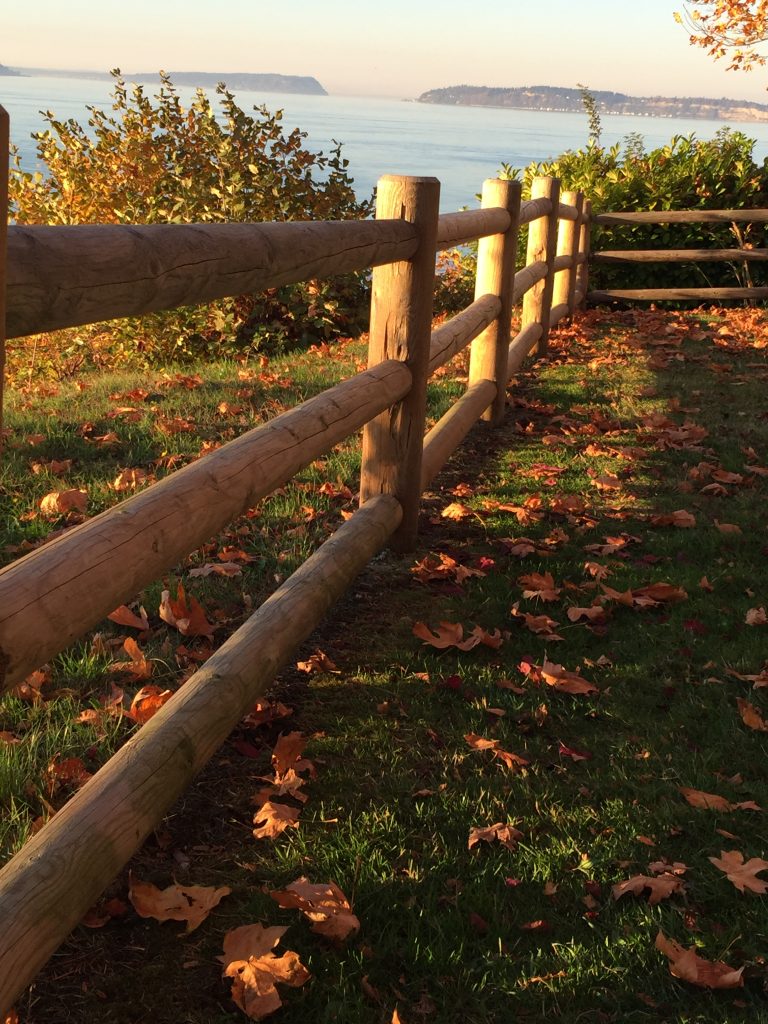 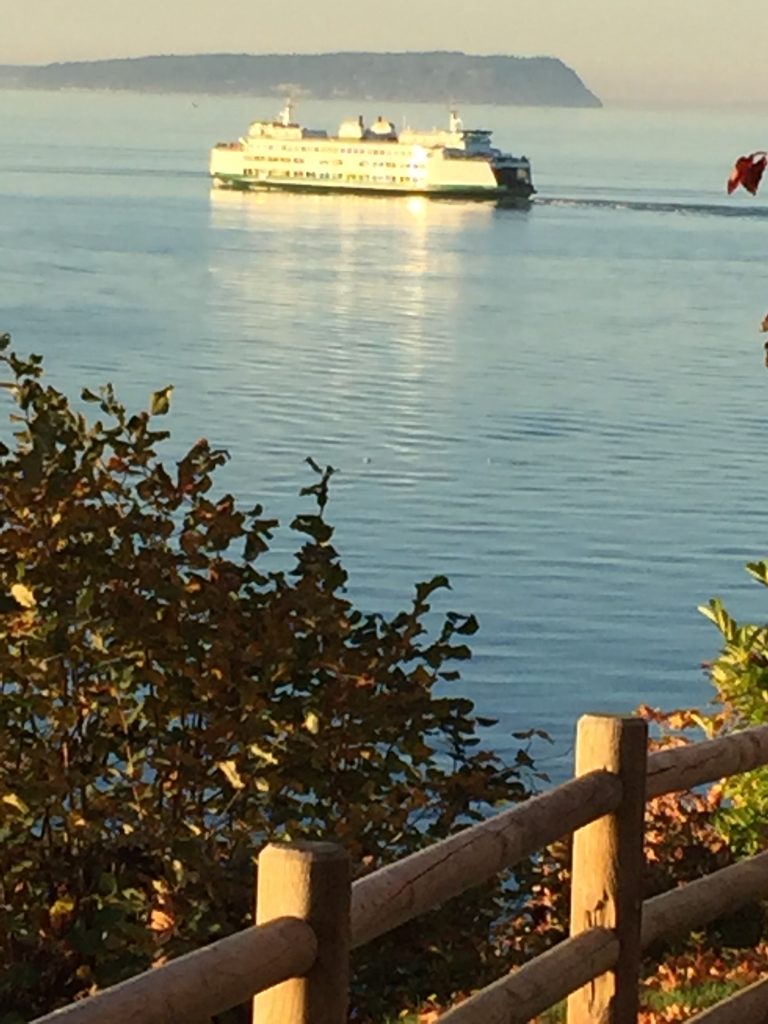 A pretty little perch with a view of the ferry traversing back and forth to Whidbey Island.

This area (Seattle), is so beautiful and charming, you could virtually step out your back door, no matterwhere you live, and it would be a great place to do a video. (I’m exaggerating a little, but it really is beautiful here everywhere.)

Just then, the phone rang.

My son, Tim, called to see whether I’d like to go to a pumpkin farm with him, Pauline (my daughter-in-law), and Evie and baby Ellis, my 5-year old granddaughter and 3-month old grandson, respectively.

(That’s a standing joke in our family. When he was young (about 10 or 11 years old), he went through a phase where he’d say that every time I asked him to do something around the house.)

Even though we’re all grown up (or are we?), we still say that to each other from time to time.

He said, “Dad, you gotta be ready whenever we call.”

I said, “I think I need to set some boundaries.”

So we met at the Swan Trails Farm about a half hour later. (He’s got me so trained.)

It was a nice and expansive farm. The atmosphere was fun and festive. Bluegrass was playing.

There were some animals you could walk up to and pet.  There were a lot of places for kids to play.

There were slides for grandpas to slide down with their grand kids. 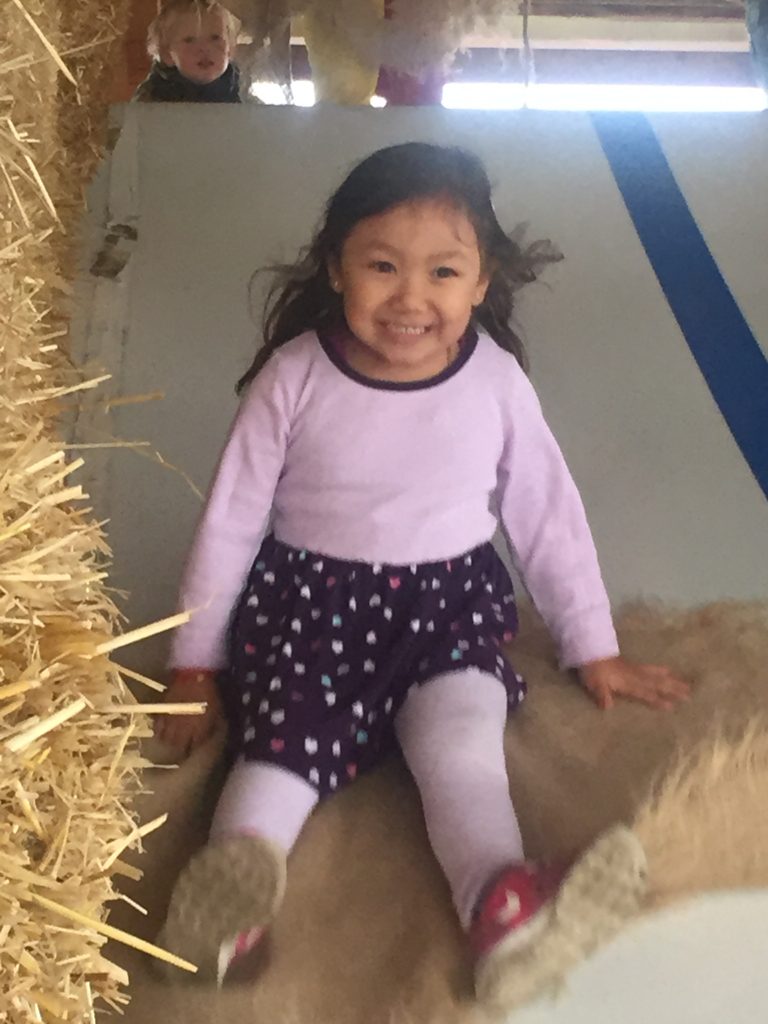 There was a bakery and an espresso shack.

There were wheelbarrows to carry the pumpkins you selected, to the booth, to pay for them.

And there were “photo ops”. 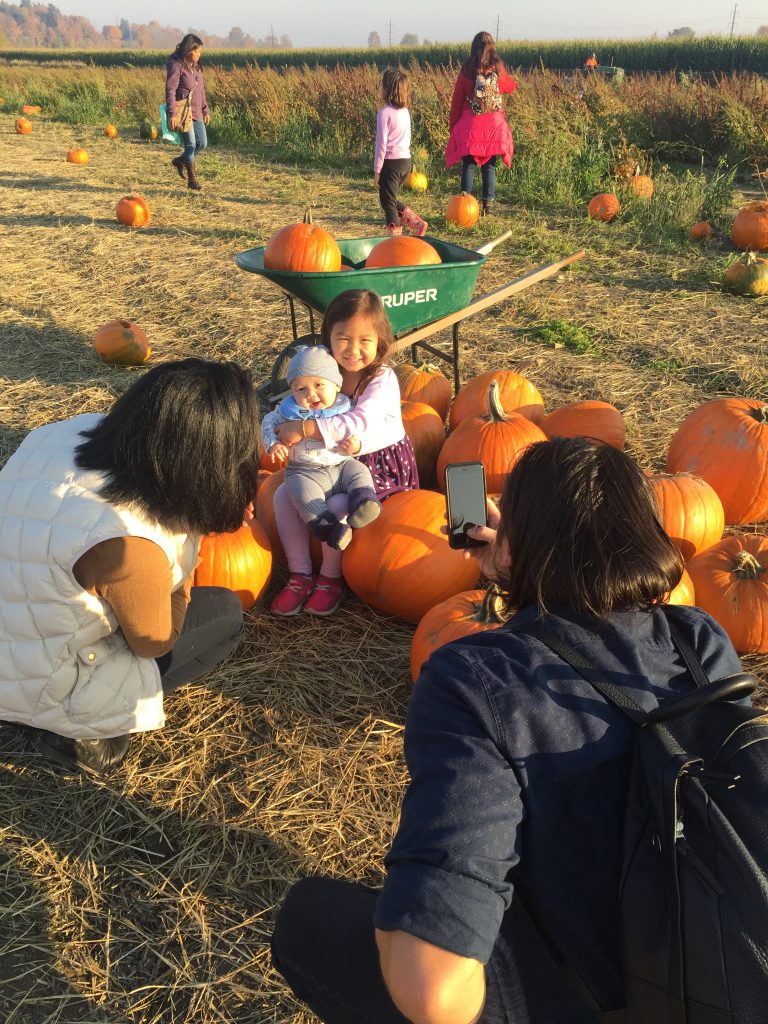 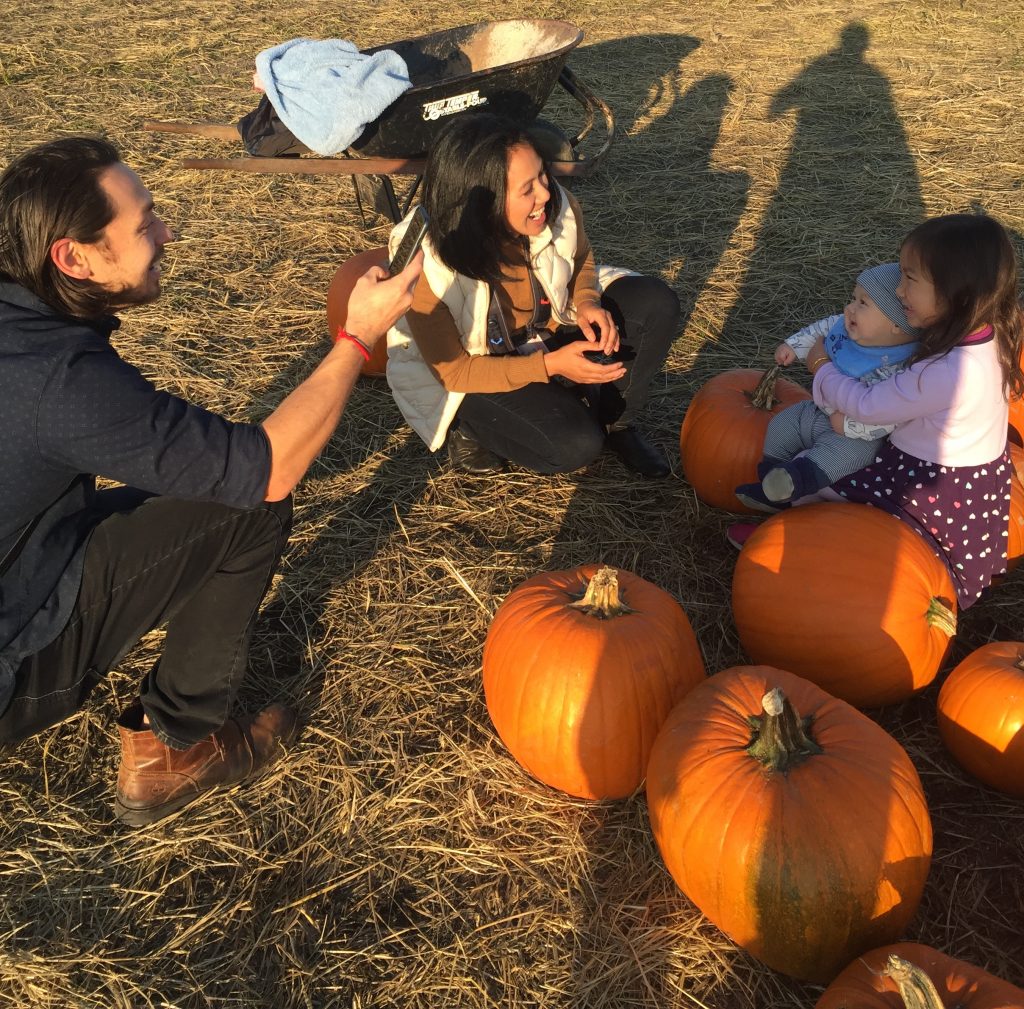 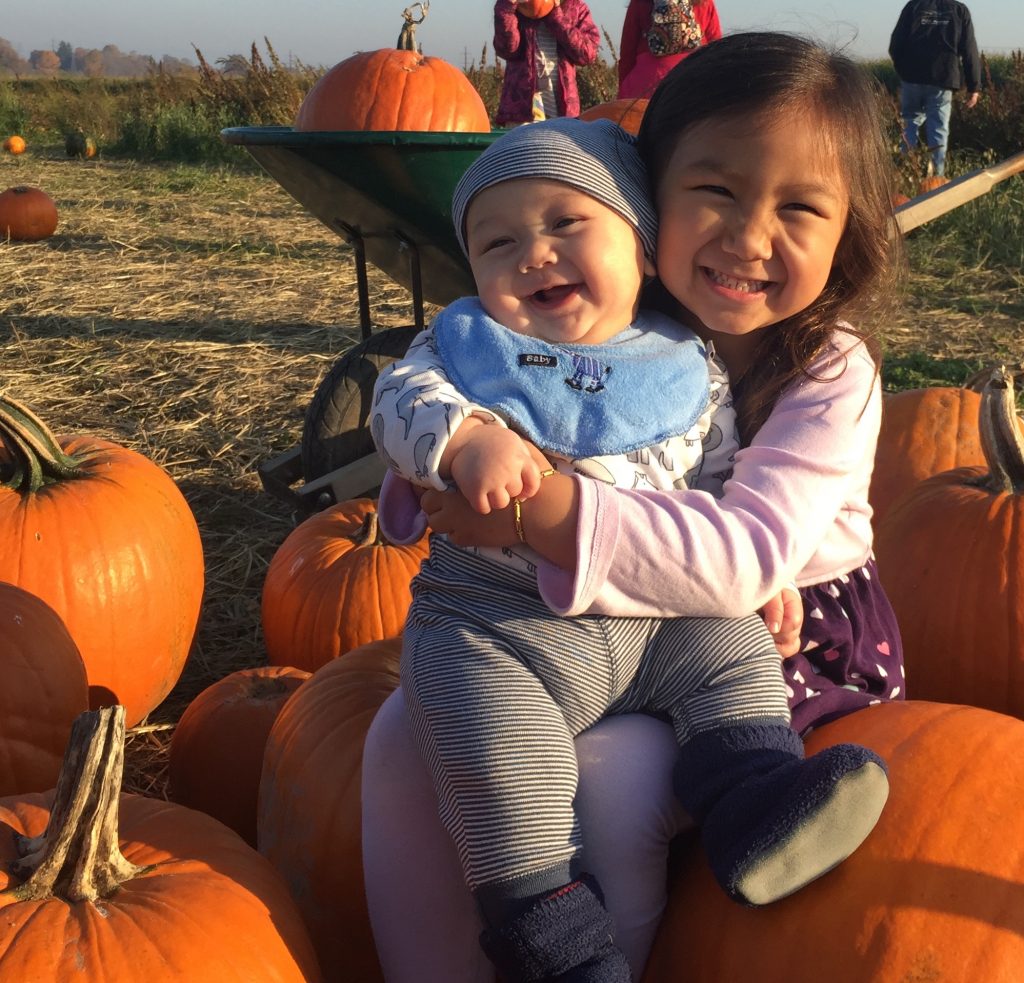 There was a hay pyramid. 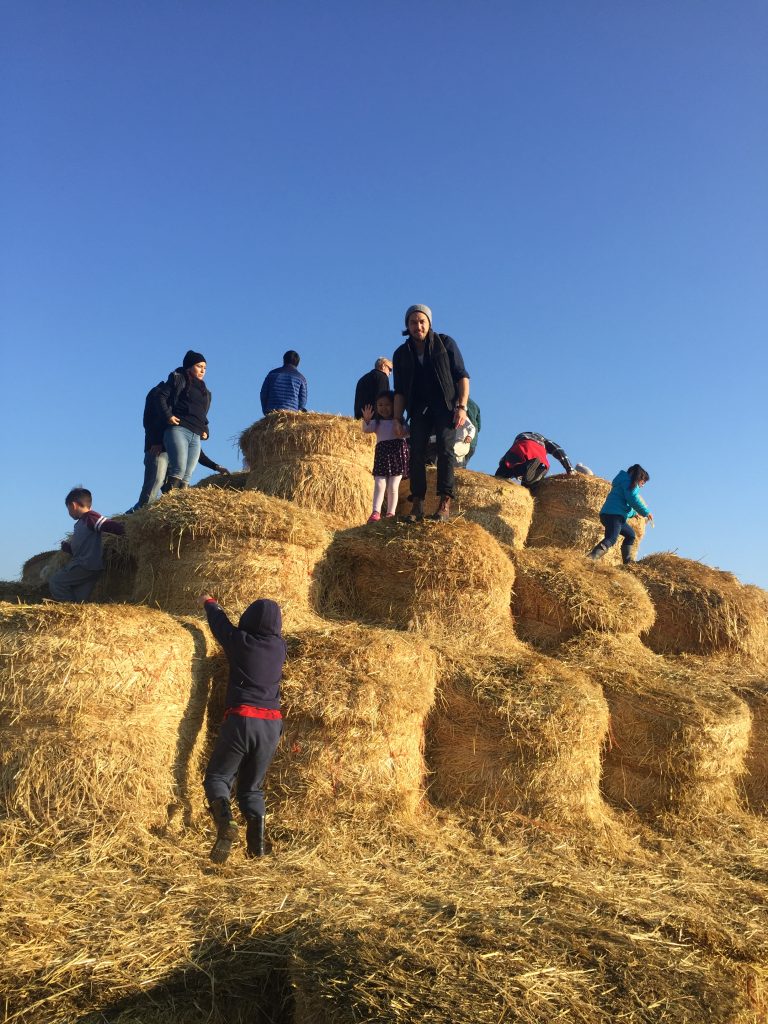 (Click on the link above to watch Tim and Evie jump down the pyramid).

And there was a 12-acre corn maze (see the satellite image at the top of this post), in the shape of Washington State.

We spent about three hours there and then we started to head home. They in their car, and I in mine.

AN IDEA  IS BORN!

So I turned around and I went back to the farm.

I hopped onto the tractor-pulled wagon, to catch a lift out to the part of the corn maze they call Idaho, to do a video clip of me in the corn maze singing my new song. 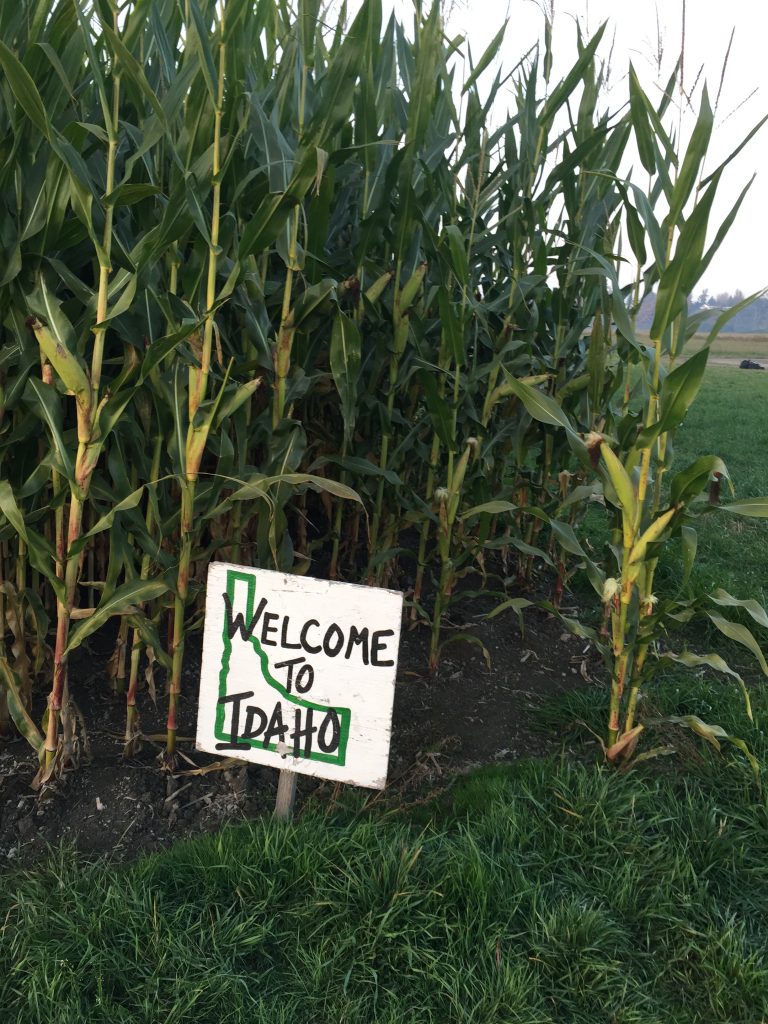 To hear the song, just click on the video, below. The lyrics are below the video.

Sometimes I get a little lost in your trance.

Your poise, the wonder of you, a glance.

Sometimes  I get a little lost in your trance.

Passion and reverence, in your song and speech, abound.

Thunder and lightening burst from your movement and form.

Your strength and goodness from your spiritual source.

Sometimes I get a little lost in you.

I wrote this song about Lizz, out of respect and admiration for her.